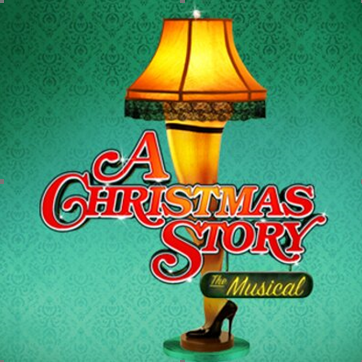 High above the town, flying down, better catch it quick— it’s better than ole Saint Nick— and it may still be in other locales— but somewhere hovering over Tidewater Players…across the whole opera house stage and straight to you…comes A Christmas Story. That’s right, kids— and kids at heart— after waiting for ages in line at Higbee’s, you’ve asked Santa for that irresistible major-award of a musical, and he’s delivered— because what’s the harm in simply watching Ralphie Parker shoot his eye out with his Official Red Ryder Carbine-Action Two-Hundred-Shot Range Model Air Rifle with a compass in the stock and this thing that tells time? Directed by Laurie Sentman Starkey, with Musial Direction by Stephanie Carlock Cvach, and Choreography by Amanda Poxon, this time-honored classic and all of its triple-dog-daring hallmarks is waltzing its way into your hearts just in time for Christmas.

It’s a delightful set; the holiday iconicism of Holman, Indiana circa 1940 is well represented in the crafty scenic design of Dickey Mahoney and director Laurie Sentman Starkey. Knowing their limits and how to appropriately engage imaginations of the audience, Mahoney and Starkey create the holiday spirit of the infamous Higbee’s department store using empty window frames, and letting the ensemble look out through them. They don’t skimp when it comes fascinating sets, everything from the Parker household to the winter wonderland of the epic Santa scene inside Higbee’s— complete with its own slide! Augmented and highlighted, quite literally, by Lighting Designer Thomas Gardner, the show’s aesthetic is polished and refined, a step above what most would call community theatre production values.

Wearing yet another hat, Laurie Sentman Starkey heads up the costume crew, which features the work of Barbara Hartzell and Eva Grove. This trio of talent well-serves the production, giving everyone the vibrant flavors of Christmas one expects to accompany such a festive, national treasure of a Christmas tale. Costumes worth noting in particular, are the outlandish elf outfits seen in Santa’s village, the dazzling flapper gowns during “You’ll Shoot Your Eye Out”, and of course, the hand-spun, homey, and all-together charming house dresses of Mother— tailored and crafted by Eva Grove, who is also playing the character.

The show’s choreography is snappy and smart. Choreographer Amanda Poxon, who incidentally plays Miss Shield and creates a divine tap series all during her feature number, ensures spirited dance routines throughout the performance. Her finest work is featured during “A Major Award” and “You’ll Shoot Your Eye Out”, where leg-lamp dancers and tap-dance flappers get up to some kickline choreography and fancy tap routines respectively. Featured dancers for these routines include Poxon herself, along with Samantha Jednorski, Megan Coleman, Lea Scavetta, and Elise Starkey.

With a boisterous and enthusiastic ensemble, all of the show’s energetic numbers bounce and burble along with the rowdy and yet authentically vibrant spirit of Christmas. “It All Comes Down to Christmas” is one of the prime examples of Musical Director Stephanie Carlock Cvach inspiring such joyous sentiments and enthusiasms all throughout the performance. Cvach brings the young actors of the production together for “Somewhere Hovering Over Indiana” as well as bringing the two principal young actors together with strong harmonies for “Before the Old Man Gets Home.”

The show has genuine heart. Director Laurie Sentman Starkey and the company approach the story from a heartfelt place of truth. There are sweet and delicate moments that hone in on the true meaning of Christmas (watch the Old Man and Mother under the Christmas tree near the show’s conclusion, just to name one) sprinkled like a Christmas snow-shower throughout the production. The casting is smart; the principals play well off one another and Starkey’s decisions when it comes to cameo roles— like Stacey Bonds and Samantha Jednorski as the head elves in the Higbee’s Santa scene or the uproarious and frighteningly hilarious Chip Meister as Santa Claus himself during “Up On Santa’s Lap”— all bring the show together as the perfectly packaged Christmas present.

There is a real sense of Christmas magic happening on the stage of Tidewater Players shimmering through all the performances, but the binding tie seems to fall into the lap of Jean Shepherd (Tom Hartzell.) While the original film and the non-musical production of the show clearly credit the narrative figure as Ralphie Parker all grown up, the musical takes a less obvious approach, though this doesn’t stop Hartzell from making this character exactly that with his own heartfelt twist on the role. Overcoming the daunting challenge of laryngitis on opening night, Hartzell gives a stupendously energetic and cheery performance, bouncing all about guiding the tale like a warm-burning Christmas light. Jolly, jovial, and sharply present (for little moments like costume hang-ups that could have otherwise completely derailed a scene), Hartzell is the harbinger of holiday happiness and opens the gateway into Holman, Indiana for the Parker family Christmas experience.

All he wants for Christmas is an Official Red Ryder Carbine-Action Two-Hundred-Shot Range Model Air Rifle with a compass in the stock and this thing that tells time! No way, Ralphie Parker (Jamie LaManna), you’ll shoot your eye out! Fully in sync with the comic shenanigans that Tom Hartzell puts forth as the narrative “older Ralphie”, and readily engaged with the humors of the show, every iconic moment is lived lively and fully by LaManna. He’s too cute for words playing against his whiny younger brother, Randy (Evan Christy.) And really socks it to the show’s big bully, Scut Farkus (Braeden Waugh), during in the unforgettable fight scene. The entirety of the kids ensemble including the aforementioned principal children as well as Regan McComas, Grant Wright, Sophia MacKinnon, Carly Greaver, and Michael Maroney (playing Flick, Schwartz, Mary Beth, Esther Jane, and Grover Dill respectively) and Nina Armstrong, Ava Rose LaManna, and Molly Martin, really put gumption and gusto into “When You’re a Wimp”, a number which makes LaManna’s big triumphant defeat over the bullies that much more satisfying.

With serene sincerity and Christmas sweetness that simply cannot be beat, Eva Grove as Mother is the epitome of maternal caring in this production. There is almost a careworn approach to the way Grove creates Mother, which is very endearing. Appropriately matched against Gary Dieter’s Old Man, the chemistry between the pair captures the pure essence of what a loving, married couple from an innocent time gone by truly looks like. Her big solo feature, “What a Mother Does” is tasteful and simple, thoroughly enjoyable. Her voice floats through the lyrics, not too pretty, not too gritty, perfectly balanced and comforting just like a warm embrace from a mother. There are tender moments that Grove shares with the children, mostly with LaManna’s Ralphie Parker, and these moments ground the very kitschy wholesome play in a sweet, yet sensible reality.

Show-stealing triple-threat Gary Dieter— that frizzle-frazzle, frackin-clackin’, fligger-flugging, fabulous performer that takes the to the stage in this production as The Old Man— is at the core the spirit of Christmas. Bringing an incomparable balance to the role, Dieter highlights the nuances of the character superbly. He finds the humors and the sincerity, he unearths the campy levels of comedy that are an integral part of The Old Man character while simultaneously making him a character of real dimension and depth. There is an honesty and a rawness that isn’t too deep to derail the construct of the character but at the same time makes him more than the stereotypical static cursing up a blue-streak father. Dieter, who is well-known for his comic character work and phenomenal dancing skills all over Maryland, masters the role of The Old Man, no question. Dieter puts an old-school, almost Vaudevillian polish and panache on “The Genius on Cleveland Street” the way one might shine up a cherished auto with Simonize. In addition to the stellar dancing featured all throughout his routines— including up on the couch and down-tipping chairs— Dieter’s voice is a force to be reckoned with. Clear as a bell, pure as a perfect tenor sound, and full of spirit, he embraces “A Major Award” and transforms it into a show-stopping, ovation-winning song and dance moment of excellence.

You’ll shoot your eye out if you miss this production of A Christmas Story. It’s heartwarming, funny, and full of everything you need to get in you in the mood for Christmas. Tidewater Players deserve a ‘Major Award’ for their successful attempt to put up this very challenging holiday musical in tandem with their production of Winter Wonderettes.

A Christmas Story at The Maryland Ensemble Theatre

A Christmas Story is Coming to Town: An Interview with Joey Little
Close