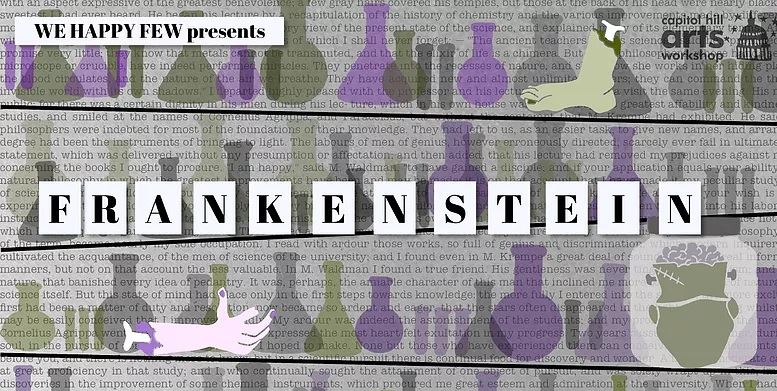 All that I should say seems inadequate and feeble in regards to this glorious production of Frankenstein that We Happy Few have set down to kick-start their Horror Rep in this 2018/2019 season. With spirited ensemble nature driving the life-force of the performance, this hour-long bulleted intensive of Mary Shelley’s masterwork is an engaging thriller that submerges you right in the midst of Dr. Frankenstein’s crisis. Directed by Robert Pike & Bridget Grace Sheaff, this compelling experience zaps theatergoers full of the true Frankenstein experience, brilliantly adapting the tale to the stage in a readily digestible and intriguing 60-minute theatrical morsel.

Most in the modern era of misconceptions have finally learned that Frankenstein is not the garish green creature with the bolts in the neck and the zipper-scars running across the face, but rather the mad-scientist who created the aforementioned abomination. That does not mean that people, familiar with the Frankenstein lore, don’t still expect some sort of monster. We Happy Few have mastered that demand with resplendence. Production Managers Kerry McGee and Jon Reynolds, along with the devising team (Keith Hock, Kerry McGee, Paige O’Malley, Robert Pike, Sam Reilly, Jon Reynolds) have put the art of junk-puppetry into practice. The grotesque misshapen lump that serves as the creature’s head is just barely recognizable as a head, furthering the illusion of Dr. Frankenstein’s monstrous creation. Floating and puppeted by three of the four performers in the piece, it is given freakish otherworldly life.

McGee, Reynolds, and the aforementioned team put this notion of simplistic trash-to-treasures to use throughout the entirety of the performance, not just with monster. Frankenstein’s brother William is another fine example of this device at work. All of these efforts are brought in and out of existence by way of Lighting Designer Dan Smeriglio, whose illuminating tactics add both chill and fervor to these scenes, creating atmosphere and functionality upon the setting. The team moves blissfully about the black-box-found-space, drawing the audience— seated quite close in an L-formation around the play space— into the narrative, which unfolds with great hast, though doesn’t skimp on the detail. 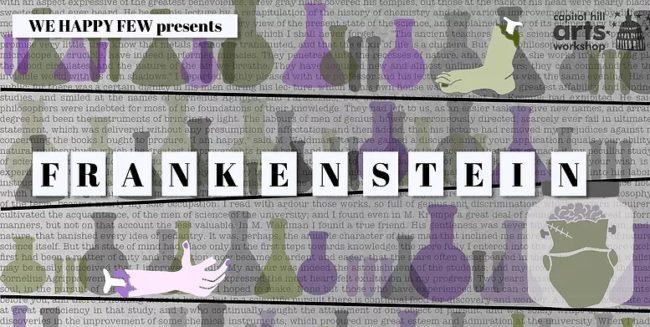 The devising team and Directors Robert Pike and Bridget Grace Sheaff have created their own monster, in a sense. A beautiful salvage of the important bits of Shelley’s Frankenstein, though not without exquisite attention to select detail. The sheer notion of Frankenstein in an hour— given all the locations and occurrences covered in the novel— seems daunting, nigh impossible. Yet Pike and Sheaff and the devising team get the ball rolling beautifully and spin a masterwork of their own from Shelley’s masterwork. For those familiar with the story, nothing feels as if its missing. For those unfamiliar with the narrative, you learn a great deal. Much like the novel, they start at the end and piece becomes a recall for Dr. Frankenstein.

With just four performers, the performance is truly an ensemble work of art. While Scott Whalen does play Dr. Frankenstein, flitting perpetually about the stage with indefatigable energies, he works as a functional cog in the machine of four. Navid Azeez, Paige O’Malley, and Stefany Pesta take up all other roles, including moving and speaking as one when they become the creature. What’s more is Azeez, O’Malley, and Pesta are responsible for the primary harrowing sound effects featured throughout the performance. The unearthly moan of life that is the signature’s existent cry, the wuthering howl of winds upon the sea, and all other such sounds, including the pounding heartbeat of the play itself as it blips from scene to scene, are all made by the performers on stage and to quite a stunning effect.

Azeez, O’Malley, and Pesta are lively; there is no better word to describe the way they flit about interacting with one another and with Frankenstein. For as much energy as Whalen expends in playing the unraveled maddening scientist, they match volt for volt in their portrayals of all the other characters, each uniquely their own with quirks, quips, and ticks. All four performers find moments of humor, albeit at times darkly, in the performance, and all four performers deeply engage their entire physicality into the work they are honing. Directors Pike & Sheaff find an astonishing balance, never letting the scales tip one way or the other between the ensemble of characters and Frankenstein; it is a most surprisingly even ensemble tale, even though one performer takes on the sole responsibility of Dr. Frankenstein.

With multitudinous veins of energy, this cast of four is miraculous to watch in action. They are innovative in their storytelling and gifted in the magnitude with which they explore such a tale in such brief period of time. Perfect for the Halloween season, this hour-long bullet of Frankenstein is just what the doctor… well, maybe not this doctor…but just what is ordered to add humor, spookiness, and chilling tingles to the haunting end of October.

Frankenstein plays through November 10, 2018 at a party of The Horror Rep with We Happy Few in residence at the Capitol Hill Arts Workshop— 545 7th Street SE in Washington, DC. Tickets are available at the door or in advance online.

For tickets to see A Midnight Dreary, click here.

Dracula at We Happy Few

Frankenstein at Off The Quill