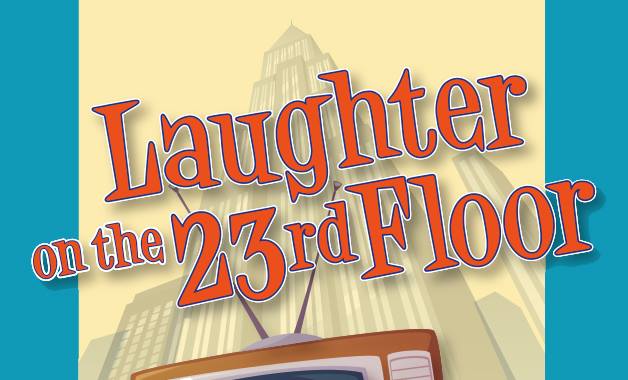 Your entire future depends upon you finding a voice for your comedy! And there’s no truer a statement when it comes to Neil Simon’s Laughter on the 23rd Floor opening the cabaret series at Cockpit in Court this summer. Directed by John D’Amato, this zany, albeit dated, comedy finds purchase in today’s society with its striking relevance to the bullying process of censorship in media and entertainment.

Hayden Muller is at the top of his game with simplistic Scenic and Lighting Design (except for one slightly mis-angled overhead light which casts somewhat of a blinding beam of irritation into just one small section of the in-the-round spacing) for this production. The writer’s room of the Max Prince show is a conventional 1950’s space, with minimalism as its forefront for ease of comedy as well as keeping the working performance area clear of clutter. Working with Stage Manager Emily Regan and Director John D’Amato, the verisimilitude of the show is quite impressive. There’s real lemon pound cake and bagels (but don’t get your hopes up for pumpernickel!)

Further fitting the show into its 1950’s time-slot, Costume Designer Eva Grove (who’s doing double duty with her sartorial selection hard at work on the downstairs mainstage with a production of Avenue Q) gets the suits looking crisp, Milt Fields’ costumes looking ridiculous, and the dresses for the two women feeling the era of the show’s setting. Although some adjustments should be made to make Carol Wyman’s pregnant belly look a little more realistic and a little less “big-balloon-under-maternity frock”, ultimately Grove tackles this costume pieces sublimely and helps each individual find veins of their characters’ humors through clothing.

Director John D’Amato marches the pace of the production steadily forward, trying to keep the comedy moving as quickly and as succinctly as possible. There are a few times, little bumps here and there, where some of the younger actors (portraying older characters) don’t quite keep up with the show’s snazzy, zippy pace and rapid-fire exchange of the comedic dialogue. While this isn’t a hugely detracting feature, it does at times create pauses that feel out of place. This aside, D’Amato sets forth a fine production of Laughter on the 23rd Floor, subtly honing in on the tenser, deeper issues that are buried way beneath the surface of Simon’s laughable subject matters.

Ja’min Williams, is young and spunky and puts a unique spin on his portrayal of Lucas Brickman, the external narrative figure of the show. The Lucas Brickman character is a study in duality as he exists in a meager and coy fashion when active in the scenes but tells the story with bold sincerity when narrating them from outside of the scenes. Williams’ interactions are split evenly with the other performers and he handles each of the exchanges with a subtle sincerity that gives the comedy a sense of honesty.

Tirrell Bethel, as the spastically over-the-top Ira Stone, is certainly energetic in the role and at times delivers his lines so quickly that what’s coming out of his mouth is almost lost. Taking an outrageously modern edge to the hypochondriac character, Bethel makes an entrance when his character finally shows up for work. Almost the polar opposite of Bethel’s Stone, Alan Berlett’s Kenny Franks is slow and almost muted in the energy department. This languid character choice provides a nice balance to Bethel’s spastic energies. Zack Hartley’s Brian Doyle is equally calm, though ever so slightly antagonistic when it comes to having at the hypochondriac, and finds sharp edges with his witty zingers.

Despite being a featured cameo, the role of Helen is done a world of wonders in the hands of the bubbly Jessi Zawadowicz. Mastering the patois, cadence, and overall simplicity of a 1950’s office secretary, Zawadowicz is living in the moment of 1953 and delivering the female stereotype of the time sublimely. Jennifer Skarzinski, whose character is the only woman among the writers, has a much crasser approach to her feminine wiles. The character even states that in the writer’s room she doesn’t want to be a woman; she wants to be a writer. Brassy and ballsy, Skarzinski holds her own among the calamity that is a male-dominated comedy scene.

With an extraordinary grasp on the thick Russian accent (but not so thick as to not be understood) Chris Cahill delivers Val Slotsky with punch and panache. His comedic timing is sharp, his jokes are witty, and his agitated interactions with Milt Fields (played by the incomparable John Dignam) are hilarious. Dignam an Cahill are in a constant battle over who’s stealing the show with their shenanigans, each giving the other a run for their money. Dignam showcases a marvelous mastery of how to walk, talk, and tell jokes at the same time, while honing in on the physical comedy that accompanies his character’s antics. The pair are well matched and do the show and Neil Simon’s comedy a great justice.

Bringing home the bacon, as well as the hole-punches in the wall, Thomas “Toby” Hessenauer is the epitome of the hot-headed, red-blooded, bombastic Max Prince. There is a curious balance that Hessenauer finds in the character, bouncing from fits of rage and explosive emotion into wary states of confusion and nerves, and doing so without blinking an eye in-between. Hessenauer plays the character in earnest and lets the text create the larger-than-life legend that is Max Prince (modeled after real life Sid Caesar) rather than punching him up with cheap gimmicks or overly-intense physical shtick.

Ultimately a good afternoon or evening of laughs (depending upon if you take your daily dose of comedy in the matinee format or the nighttime), Laughter on the 23rd Floor is sure to bring forth the smiles and the chuckles and remind us all that laughter really is the best medicine for just about everything.

Laughter on the 23rd Floor plays through July 1, 2018 at Cockpit in Court in the upstairs Cabaret Space of The Robert and Eleanor Romadka College Center at the Community College of Baltimore County Essex Campus— 7201 Rossville Boulevard, Essex MD. For tickets call the box office at (443) 840-2787 or purchase them online.

Laughter on the 23rd Floor at Laurel Mill Playhouse

Review: Towards Zero at Cockpit in Court

Review: Don’t Drink the Water at Cockpit in Court
Close