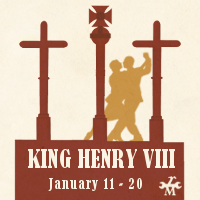 “Men’s evils manners live in brass; their virtues we write in water.” And we shall now ascribe the virtues of The Rude Mechanicals production of Henry VIII in ink. Well, digital ink. Directed and Choreographed by Liana Olear, this ‘lost history’ (the most boring of the boring and banal of banal Shakespearean histories) is revitalized and given a new lease on life. Olear’s strategic placement of the historical recounting of the eighth Henry in the mid 1910’s lends itself to her dancer’s passion, thus enabling her to pursue the lackluster plot with vigor and vivacious movement. The pacing is smart, the blocking is sharp, and the nuanced attention to detail is striking. In true Rudes’ tradition, the production judiciously renders the show down into a perfectly packaged production ready for absorption and digestion by even those unfamiliar with the Bard’s archaic tongue.

The scenery— a venue new to the troupe— is minimal, but well serves the production in its simplicity. Lighting Designer Jeff Poretsky does his best with lighting trees assembled just beyond the edges of the found-space-black-box-style staging, creating ambiance that is most striking for certain scenes and a bit ghoulish in others. This inevitable struggle is handled to the best of both Poretsky and Olear’s capabilities and has minimal negative impact on the overall production. Refusing to take secondary and tertiary credits, Olear doubles up as the show’s Choreography and Sound Designer. The marriage of song and dance in this production is instrumental to its success, owing largely to Olear’s skilled vision of authentic period-appropriate dance styles. Flawlessly blending music, apposite to her mid 1910’s setting, against delicate dance steps— the tangoes at Cardinal Wolsey’s dinner party are divine. By blocking the stronger, more fluid dancers in the front— mainly focusing on the sudden meet-cute courting dance of King Henry VIII and Anne Bullen— any missteps or unsynchronized footwork by less experienced dancers is well-hidden. Olear again executes finesse during the fallen Queen Katharine’s final moments, entreating her untimely ending with an ethereal dance of the angel-faeries (complete with astonishing masks and costumes fabricated by Costume Designer Jamie O’Marr.)

O’Marr’s work in itself is noteworthy and not merely as a compliment to Olear’s song selections and dance displays. Sampling posh and polished looks on several of the characters’ whose genders are gentlemen (as with all Rude Mechanical shows, the casting of such roles is gender-fluid) and featuring oriental-inspirations on the performers wearing dresses (most notably the inspiring affair seen on Buckingham), O’Marr crafts a sharp and appeasing aesthetic among the show’s sartorial selection. The most gorgeous of all the pieces is not the severely red crisp pressed shirts underneath the black outer jacket of the corrupt cardinal characters but the stunning sapphire setup featured on Queen Katharine. Augmenting the actor’s natural beauty and enhancing her prominent stature an overall composure of the character, O’Marr has outdone most standards of fashion for royal characters in this production.

All walks of experience are present in this production, but Olear masterfully blends the more seasoned performs against those with greener Shakespearean tongues through meticulous blocking, precision framings of scene work, and infallible attention to detail. There is a particularly predatory blocking of the snidely self-important trio, Lords Norfolk, Chamberlain, and Suffolk (played by Alan Duda, Allison McAllister, and Joshua Engel, respectively.) During its first incarnation it is done with ruthless justice in pursuit of the corrupt Cardinal Wolsey (John Clarkewallis) though upon its second visit takes an almost farcical turn as they know not what awaits them. Olear’s precision in guiding this trio through their multitude of similar scenes well serves both actor and production, showcasing a comprehensive understanding of how best to utilize the actor and their predispositions to perfectly serve the scene. Olear subdues Engel’s cheekier nature, allowing it to burble to the surface in the exact moment of the text where such behavior is required for effect. She gives a boast to Duda’s lackluster presence on stage— particularly during the penultimate encounter with the trio and Cranmer wherein the subtle expressions and looks exchanged between Duda and McAllister are sensational— and she hones in on McAllister’s naturally savvy approach to Shakespeare.

Moira Parham and Laurel Miller-Sims, occasionally joined by Rachel Zirkin Duda, are the gossiping ganders of the production. Though their moments in the streets be brief, the fluidity with which they exchange their interactions are well-remembered and thoroughly enjoyed. As they chitter and chatter about, the dynamic they create amongst themselves is an amusing one and serves well the lesser recognized, oft dismissed, roles of “the gentlemen.” Duda, who is most remembered not for her role as Third Gentleman but rather as ‘Lady’, slays with biting cheek, particularly when it comes to her confidante scene with Anne Bullen (Claudia Bach.) While Bach, winsome and demure, is ever the doleful Shakespearean ingénue, Duda delivers sauce and cheek, honing in sharply on that juxtaposition that is best recalled from Romeo & Juliet between the nurse and the titular female. Abrupt in her comic delivery, Duda provides a most humorous edge to her scenes, making her performance thoroughly enjoyable.

Enjoyable, though in a much different vein, is the somber and solemn performance given by Christine Evangelista. Though her tongue wags well across the archaic terminology of Shakespeare, well-practiced in both verse and meter, it’s Evangelista’s facial expressions that do the bulk of her character’s storytelling. This is also true of John Clarkewallis’ Cardinal Wolsey. From the moment he skulks into the scene there is a vile villainy about him, causing immediate distrust among the audience. Clarkewallis’ character has no redeeming quality, but it is fascinating to watch him handle the knavish Cardinal with such ease.

Boorish and bold beyond compare, Peter Eichman as the titular character wears many crowns— that of almost tyrannical essence at times, though never that of cruelty. There is a bombastic quality to his outbursts, which when coupled with his stature and sheer commanding stage presence, become quite intimidating. Even when barking out things in a cheerful vein, like at poor Lovell (Patrick Stump) upon the news of his newest child, there is something unwieldly in his comportment that makes him quite frightening.

The anchor of the show, the rock that shakes apart like no other, arrives in the form of Erin MacDonald’s Queen Katharine. Equal of luster and of grace, there is a hairpin switch between her first appearance and her second, with the latter providing a shocking speech wherein— despite the begging nature of the text— MacDonald’s delivery elevates the soon-to-fall Queen to a position of ultimate power. Every line delivered with severity and emotional consequence, MacDonald schools all former and future performers of the role of Queen Katharine into how it’s meant to be handled. Emotionally invested, the transitions through which she evolves are harrowing. MacDonald creates a tragically beautiful landscape of emotions— the most ferocious peak of angered mountains when blasting out the cardinals and the most serenely devastated river when calling out her last at the play’s conclusion— delivering the performance of the show beyond a shadow of a doubt.

Henry VIII is a rarely produced and rarely experience Shakespearean history. But there isn’t a moment of lifelessness in it. Liana Olear and the talented cast have surmounted one of the greater challenges presented when mounting a Shakespearean history; they’ve kept it intriguing and have delivered it swiftly without all of the heavy treacle so often attached to such plays. Remarkable in a multitude of ways, Henry VIII is one of the most outstanding productions in recent Rudes’ history to be certain.

Henry VIII plays through January 20, 2018 with The Rude Mechanicals at West Arundel Creative Arts— 1788 Dorsey Road in Hanover, MD. Tickets are available for purchase at the door or in advance online.

One thought on “Henry VIII at The Rude Mechanicals”