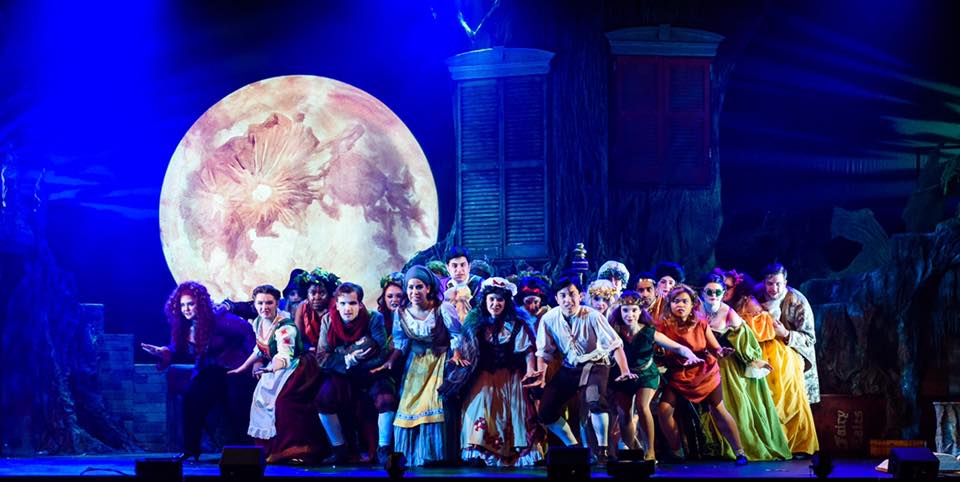 Careful what you say…people will listen! Careful the things you do…people will see! I’m saying to you, go to the woods of Montgomery County…therein you will find an enchanting production of Into the Woods at Montgomery College Summer Dinner Theatre! They’re being mighty careful with this finely honed production, celebrating their 40th anniversary year of providing a quality summertime theatrical experience with talents students aplenty. Directed by Walter Ware III, with Musical Direction by Walter “Bobby” McCoy, this mystifying musical is one of Stephen Sondheim’s more complex pieces, twisting and warping fairytales into that unique musical style that only he can provide. And the performers of MCSDT handle it divinely.

Fantasy and whimsy unfurl in the magically wondrous set that Scenic Designer Elizabeth McFadden has concocted for this production. The rolling fluidity of the set pieces, which slip and out of the base of the tree, are but one of the marvels McFadden has custom-tailored to the movement and pacing of this show. Following Director Walter Ware III’s vision of a woods that is filled with spirits and denizens, McFadden gives life to logs, houses, and a myriad of other pieces, many of which are slid easily into place by the wood-nymph ensemble (Aleks Arsin, Christopher Blackwell, Ezinne Elele, Isabelle Gholl, Paul Ihadji-Moudoki, Gabrielle Marrapodi, Patricia Pablo, Kira Peck, Abigail Plshin, Rebecca Rhodes, Maddiie Valikhovskaya, Yian Zhang.) These smooth transitions enhance the magical properties of these guiding forces that Ware has constructed around the fairytale, making it that much more spectacular.

Assisting the appearance of these mystical creatures, Costume Designer Peter Zakutansky envelopes the ensemble in shreds of earthen enigmatic fabric, making them appear to be nymphs of the wood, and the ultimate source of The Witch’s powers. Zakutansky’s visions for the fairytale characters is fitting for their stations in the story— particularly The Witch and her two costumes that represent the dramatic change her character undergoes for the Act I finale. The glamourous styles and colors witnessed on the royal family are as vibrant as the peasant clothing is dull. Zakutansky’s approach to costuming the show fits well within the established aesthetic that Ware and McFadden have achieved in their direction and design of the production.

The way is clear, the light is good— though better than good— because Lighting Designer Lynn Joslin has her signature approach to color and balance all over the illumination plots. Creating breath-taking moments— like the silhouette capture of the Mysterious Man against the green rising moon at the end of “No More” and every time the enchanted clock lights up to show the passing of time— Joslin is a prestidigitator of the highest caliber when it comes to lighting design. Augmenting the natural emotions of a musical moment and enhancing the expressions of the performers telling the story, Joslin’s work is sublime and is a treasured asset when it comes to the overall production value of the show.

Nods of praise are also warranted in the direction of Sound Designer Ryan Hickey, who creates some grody sounds for Milky White’s digestion scene, and to Choreographer Jesse Palmer Miller, who’s delicate hand of dance slips into the larger full-cast scenes as well as amid the ensemble, who have their own dance-inspired movement tracks all throughout the performance as interactive portions of the background. Miller effectively creates living scenery out of the wood-sprite ensemble members with the unctuous movement put into place every time a spell is cast, set pieces get whisked away, or things start happening in the woods.

Performances are strong, the show is good, they have no fear, nor no one should. The principal performers who tell the story are impressive across the board. Zachary Norris, who starts life as the Narrator and switches roles back and forth between the capital storyteller and that of the Mysterious Man, has an aloof yet engaging stage presence about him. Listen carefully for his hearty voice during “No More”, a duet near the show’s finale, shared with the Baker. Much like Norris, those in the Royal Family— Leah Windley, Gordy Anson, Sarah MacPhee, and Kit Flaherty as the Stepmother, Cinderella’s Father, Florinda, and Lucinda respectively— find cause to have the audience pay them attention when necessary. Anson’s stumbling drunk antics are as amusing as the fair-of-face and vile-of-soul attitudes presented by Windley, MacPhee, and Flaherty. Add to this mix the flamboyant and over-the-top Steward (Paul Ihadji-Moudoki) and you’ve got all sorts of things to keep you entertained when their portions of the story are occurring.

Dulcet of voice, fair of tone and pitch, Rapunzel (Phoenix Miranda) has more to showcase than just beautiful long hair. Miranda, who makes her stage debut with this production of Into the Woods, puts a fairytale attitude forth like no other, truly embracing the notion of Rapunzel’s warped existence, while still managing to produce a sweet and mellifluous sound every she sings. Equally impressive in her singing, though there is little of it to be heard, is Claire Gallagher, playing Jack’s Mother. Relying heavily on the sharpened edges of the character’s nature, Gallagher presents the gritty hardships of being a mother when you have a son as uniquely peculiar as Jack.

Agony! Misery! Woe! All the things you’ll experience if you miss Steven Bennet and Jehan Silva as the two princes. Bennet gets a bit more time to shimmer, sparkle, and shine in the spotlight as he plays the “Wolf/Prince” track, really putting a humorous, albeit disturbing, spin on “Hello, Little Girl.” Both Bennet and Silva are strong of voice, conscious of pitch and clarity when it comes to their performances during “Agony” and later during the song’s reprise. Silva does a bit more leaping and flying about, physically, while Bennet uses his wildly animated facial features to express the foppish and somewhat foolish nature of this prince. Both are gems in their respective roles and both give the audience a good barrel of laughs when it comes to the various predicaments in which they keep finding themselves.

Loaded with spunk and pumped full of panache, Tobi Baisburd is anything but ‘little’ when it comes to playing Little Red. Her fierce and tenacious approach to the character makes the descriptor lines like “you can’t frighten her” that much pluckier and more humorous for the audience. Bouncing about with a brilliant attitude in addition to a boisterous and well-toned singing voice, numbers like “Hello, Little Girl”— a duet shared with Bennet— and “I Know Things Now” become remarkable to hear. Baisburd is a spitfire sensation and does a healthy blow of justice to the character, which is often dismissed as a comic relief. Baisburd finds the balance in her character, making her both humorous and sincere, really investing the audience in Little Red’s perspective of the story.

Much like Little Red, Jack (Jordan Moral) is a burst of enthusiasm that has erupted over the production and rained down like a shower of much-needed energetic glee. Moral plays the character on the naïvely excitable side of things, leaping and springing about as if there were magical jumping beans in the soles of his shoes. Watching Moral’s physicality and the way he flings himself all over the stage (and all through the house) is a show in itself! And while there are many moments where Moral’s character sings, the most memorable is naturally “There Are Giants in the Sky.” This solo becomes a spirited ballad for Moral; the conflagration of excitement, fear, exhilaration, and all of the other dozen emotions he’s experiencing come bounding out not only of his voice but all through his limbs and face during this number, painting for the audience a picture of the wonders he’s experienced in the kingdom of the giants.

Wicked, vile, and revolting, or perhaps just misunderstood, The Witch (Samantha Shoop) is a dynamic character with lots of room to fiddle and explore. Shoop does exactly that with her incarnation of this diva-bent character, bringing her own personality to the ups and downs of the character’s plight, in addition to providing the signature songs with glorious vocals. Shoop has a strong and powerful voice that is well suited for “The Vegetable Rap” segment of the unending “Prologue: Into the Woods.” Putting hearty sentiment into “Children Will Listen”, Shoop draws the audience into her character’s pain. But the ultimate takeaway is her rendition of “Last Midnight” (with alternate lyrics?) wherein the soul-spilling agony of how unfair life is when you’re a witch comes barreling out of her voice like a fiery blaze.

Leading the show with their strong chemistry, which is at times humorously volatile, The Baker (Noah Beye) and The Baker’s Wife (Anna Philips-Brown) are two superb characters whose stories are not of the traditional or typical fairytale canon. Both Beye and Philips-Brown are strong of voice, hearty in their emotional expressions, and full of quirks that really make the Baker & Baker’s Wife combo a personal and delightful experience. Beye, who lets his voice do the majority of his expressing when it comes to feelings and such, is outstanding during “No More”; his voice radiates through this number like glistening beams of sunshine. Philips-Brown has an equally beautiful sound, lusty and rich for her solo during “Any Moment.” When the pair take to singing “It Takes Two” the spark of transformation erupts to life between them.

With a heart of gold and a voice to match, Monica Albizo’s Cinderella is beyond charming; it’s phenomenal. Her voice echoes like peels of delicate cherubic choirs, lilting down from the clouds on high during her entire “I Wish” segment of the prologue. “A Very Nice Prince” showcases Albizo’s ability to think and be as the character, not merely patter back the complex rhythms of the number. Her true shining glory comes during “On the Steps of the Palace”, wherein Albizo transforms the song into something unique, sincere, and wondrous with a hint of humor here and there so that the lyrics are crisp and clear, the melody is strong and present, and her emotional thought process during the entire affair is readily palpable. Albizo is a delightful addition to the cast and makes the entire show a ‘happily ever after’ experience.

So be ready for your moment, because opportunity is not a lengthy visitor. With just two weekends of performances, you won’t want to miss this production of Into the Woods at Montgomery College Summer Dinner Theatre.

Into the Woods plays through July 2, 2017 at at Montgomery College Summer Dinner Theatre in the Theatre Arts Building of the Rockville Campus of Montgomery College— 51 Mannakee Street in Rockville, MD. For tickets call the box office at (240) 567-7676 or purchase them online.

Review: A Funny Thing Happened on the Way to the Forum at Montgomery College Summer Dinner Theatre

Review: Into the Woods at Toby’s Dinner Theatre
Close