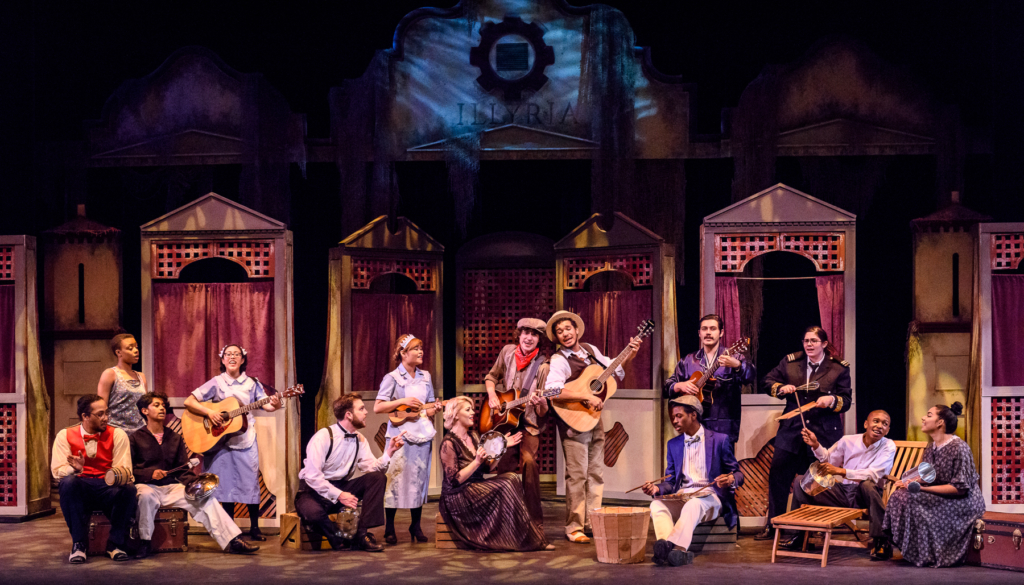 Foolery does walk about the orb like the sun; it shines everywhere and in particular a wandering fool walks about the Montgomery College Theatre Department’s production of Shakespeare’s Twelfth Night. No ordinary walker, this rambling rover, this folk-faring peregrinator, this witty fool with foolish wit, along with his ever-playing guitar and Bob Dylan songs, becomes the focal point of this production, shifting the lens through which the audience views the world and existences of Viola, Orsino, Olivia, and the rest of the madcap characters set down upon the Island of Illyria. Directed by Sasha Olinick, this intriguing and intricate reinterpretation of the Bard’s most mixed-up comedy of identity errors finds deep roots in the tradition of the American folk song and dusty trailed rambler.

Though the Island be Illyria there is something inherently American, in particular Bob Dylan’s careworn path of folk-America in the South and Midwest along the dusty road that time forgot, about Director Sasha Olinick’s placement of the production. The literal framing concept of people in windows looking out onto their lives and others looking into the windows of the lives they wish they were leading, is drawn together with this folk-American aesthetic in part by Scenic Designer R. Scott Hengen and Scenic Artist Camille Petrillo. There’s something nostalgic about the easily mobile framework of the set, not unlike The Alamo or some other rustic town with character and charm left to its own devices against time and tide.

Augmenting this aesthetical yesteryore approach to the scenery, Lighting Designer Lynn Joslin carefully overlays cool tones of sun and blue to delineate between night and day. These temporal shifts are enhanced by the clever, albeit subtle Sound Design of Neil McFadden. When characters are at the shore’s edge, McFadden underscores the scene with the gentle splash of waves upon the sand or the odd calling of a gull while Joslin dances dreamy waves of wobbling water blues across the tops of the scenic structures. Hengen, whose craft of these sturdy and well disguised scaffolding, deserves a nod of praise for making the final scene of Act I a proper comedic outcry as those hiding from Malvolio are able to scale the set pieces and properly tuck themselves believably out of view when the moment calls for it.

Threading the backwoods country road aesthetic together with his sartorial selections, Costume Designer Peter Zakutansky creates individualized looks for each performer that suits their unique style and quirky personalities. The servant costumes are particularly praiseworthy as they draw the eye to the overall temporal and spatial placement of the production. The mourning blacks featured on Olivia are also impressive as they augment her naturally classic beauty.

Performances are strong across the board, with some characters having a better handle on delivering Shakespearean language than others. For the most part, the principals understand how to directly convey the meaning behind the archaic language and unusual speech patterns for which Shakespeare is known. Despite a few hiccups and a few pauses here and there, the dialogue exchanges are fruitful, fluid, and funny. This keeps the pacing of the show relatively steady, pushing the plot forward, which allows for Olinick to thoroughly incorporate the strolling minstrel/wandering musician track that he aligns, almost exclusively, to the character of Feste.

Olinick’s overall direction of handling the production’s intrinsic comedic moments is impressive. The final scene of the first act is often a treacherous trap of missed opportunities but under Olinick’s keen supervision and guidance, Malvolio is able to rant and strut to his heart’s content while Fabian (Gordy Anson), Toby Belch (Da’Von Moody), and Aguecheek (Damon Lue Maxwell) respectively and hilariously chew the scenery in an authentic fashion free of artifice. Watch Maxwell’s note-handing shenanigans when Malvolio drops the letter, and the perfectly timed double-take that ensues; it’s comedic genius!

Moody, as the too-cool-for-school slick and charming Sir Toby Belch brings an air of panache to the character as he slips in and out of the scenes. There is something almost jazzy about his portrayal of the character, who is generally perceived as an obnoxious irritant perpetually inebriated. It is refreshing to see this refined, and yet still intoxicated, approach Sir Toby Belch. Anson, as they briefly encountered Fabian, makes his purpose felt during the aforementioned Act I finale, contributing to the antics unfolding between the quartet. Maxwell, as the awkward nerd type, falls in step with these other comic creatures ad holds his own in scenes of the like. Add to this band of merrymakers the marvelous Maria (at this performance Amber Smithers), with her cheeky delivery and sassy physicality, and the comedy is carried heartily throughout the production.

Audra Jacobs, playing Antonio, doesn’t let a little thing like little stop her as her stature and physique are quite slight, yet she fully embodies the character’s boldness when it comes to standing up for Sebastian (Paul Ihadji-Madouki) against the growling guards (Ruth Diaz, Patty Pablo.) Sister Viola (Ariana McKenzie) is well suited to her station and compliments of Zakutansky’s costume design, the pair look unmistakably identical, which helps fill the gaps of Shakespeare’s premise of twins mistaken for one another.

Bitter Olivia (Lilly White) keeps her temperament of melancholy all the while Orsino (Cristian Linares) sends his affections to her. Linares character is not featured as often as it seems he should be, but his mindful sense of stage presence grounds his essence into scenes in which he isn’t’ even physically there. Linares has a sharp notion of how to carry his character and how to articulate his emotions without being overly forthcoming in doing so. He plays well against White in what is termed “chemistry in absentia” where responses and interactions with other characters are driven and motivated by the way the present themselves in the eyes of the other, despite rarely being on stage with one another.

David Singleton is hands down running away with the show as Malvolio. Physically invested in his character’s stuffy and aloof nature, when he has to hop to action— first in chasing Viola to the gate, second in his impeccable Act I finale scene, and later just about every time he appears in the second act— it’s uproarious. His affectation and overall flaming melotheatrics make the character an honest scream and once he gets going in the golfer’s getup— argyle yellow golf socks are so very close to yellow cross-gartered stockings— it’s impossible not to laugh at his nonsense. Exceptionally humorous and keenly understanding how to balance the honest of a scene with where the funny bits naturally fall, Singleton all but owns the show and turns it into Shakespeare’s unwritten comedy: The Plight and Abuse of Malvolio.

A wandering presence, who could easily be dismissed as any fool if he weren’t so brilliant, Cole Larravide takes to the role of Feste the way Bob Dylan takes to the wandering soul of his songs. With a voice perfectly suited for singing these folk-style ballads, a sharply timed delivery of both song and spoken text, Larravide becomes, in a sense, a man on a journey through the Island of Illyria, telling all that he sees and the characters are merely constructs of his imagination, painted vividly in his mind’s eye— so much so that they appear before our eyes on stage. Carefully molding the production through the lens of this weary folk-singing traveler, Larravide is the narrative conduit that every Shakespearean comedy should possess.

No Darkness But Ignorance- Shedding Light on Trans* Twelfth Night: An Interview with Melanie Glickman and Alice Stanley