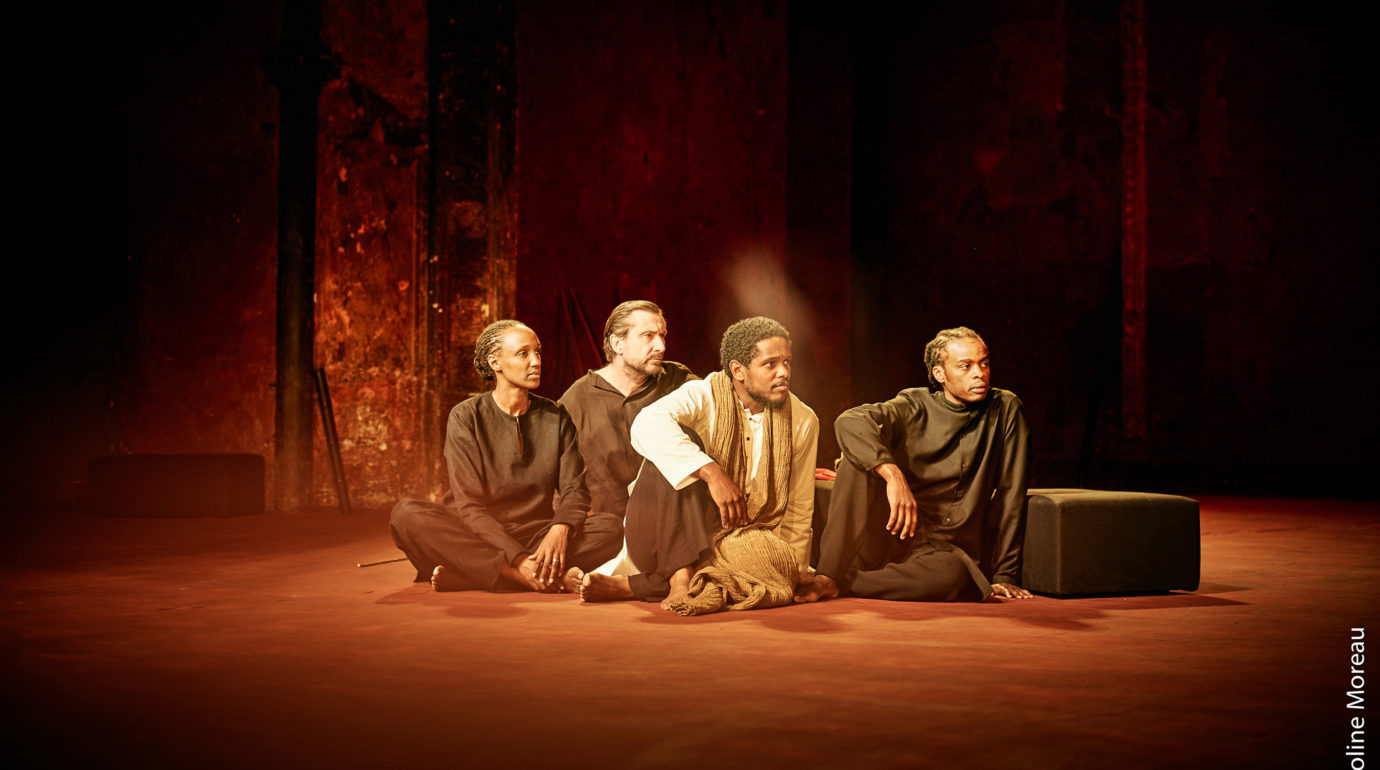 To hell with the state of humanity. Peaceful Mother Earth has tired of the war men wage upon her surface; she has revolted, leaving the bloodied carcasses of mankind as the only spoils of a bloody, bloody war. Appearing as a part of the Spotlight on Directors Series, Peter Brook’s evocative work Battlefield is an hour’s exploration of the human condition when faced with the one thing no man can escape: destiny. Based on the Mahabharata and the play written by Jean-Claude Carrière, this emotionally unsettling and yet simultaneously poetic piece of exploratory theatre delves deep into fabled traditions of the Sanskrit texts, traversing the human psyche when it comes to war and dharma.

The set is non-existent, a play space of the imagination, but this is intentional. It draws focus to the simplicity of Costume Design of Oria Puppo and Lighting Designer Philippe Vialatte. Equally minimalist in their approach to these design elements, both Puppo and Vialatte craft precision into what they do use. Four colored scarves to loosely represent the elements— air in blue, fire in red, wind in yellow, earth in green— as well as other characters when they are worn by various actors, as all the costuming Puppo calls on to weave an aesthetic edge into the production. Vialatte uses a similar tactic, a flood of green when the characters are in the woods, a burning orange when the woods catches on fire, but otherwise simple lighting to allow the story its due focus. Vialatte deserves a nod of clever genius for the lighting effect used when one character hops inside the mouth of another and drops into his stomach; it is a most curious yet spectacular moment.

On stage, Musician Toshi Tsuchitori becomes the fifth performer. Seated at his tribal drum and never once leaving, Tsuchitori creates tension and releases it with mere gestures against the drum’s head. His musical creations inform the emotions of the production, moving them along when things boil to their climax, slowing them down when the action folds to a close. Working closely with Adaptors and Directors Peter Brook and Marie-Hélène Estienne, Tsuchitori becomes a guiding force almost the way the narrative itself wends through the space waiting to be told.

Brook and Estienne draw the focus to the more mythical portions of the narrative. Whenever a fable or morality tale comes into play and the actors then take on the roles of these characters inside these moments— sometimes animals like snakes and worms and sometimes deities like time or death— the level of energy surges into a vigorous upswing. This is a sharp contrast to what is occurring in other more serene and deeply pensieve moments of the show.

The four actors— Carole Karemera, Jared McNeill, Ery Nzaramba, and Sean O’Callaghan— work as one, despite sharing the duties distinctly to move the story. Karemera, who is both a mother figure and often featured in the fabled segments of the show, has deeply expressive eyes. Watch her carefully when she plays the pigeon in the tale of The Just King, where dharma is put fully on display. O’Callaghan’s voice is mellifluous, even when he’s speaking too softly at times to be heard. There is something oily about the way words slide from his mouth, which speaks volumes about his various character portrayals.

Nzaramba and McNeill take turns pushing and pulling the plot in its various directions. McNeill does an exceptional job of creating a hybrid accent, though the sound wavers in and out from time to time. Much like Karemera, his facial expressions are intriguing, particularly when he plays as the snake and later as is the grinning boy. The lines which McNeill tackles early on, approaching the battlefield and describing in lurid detail the carnage and the aftermath is chilling.

The play, if a bit confusing for location and place in time, is thought provoking and deeply ponderous. It addresses a great many things, which readily heat the blood, stir the soul, and shake the mind. A piece well worth investigating, though a working knowledge of the inspirational text and play from which it is adapted is strongly advised.

Battlefield plays April 2, 2017 in The Family Theatre as a part of the Spotlight on Directors Series now appearing at The John F. Kennedy Center for the Performing Arts— 2700 F Street NW in Washington, DC. For tickets call the box office at (202) 467-4600 or purchase them online.

Review: The Curious Incident of the Dog in the Night-Time at The Kennedy Center
Close