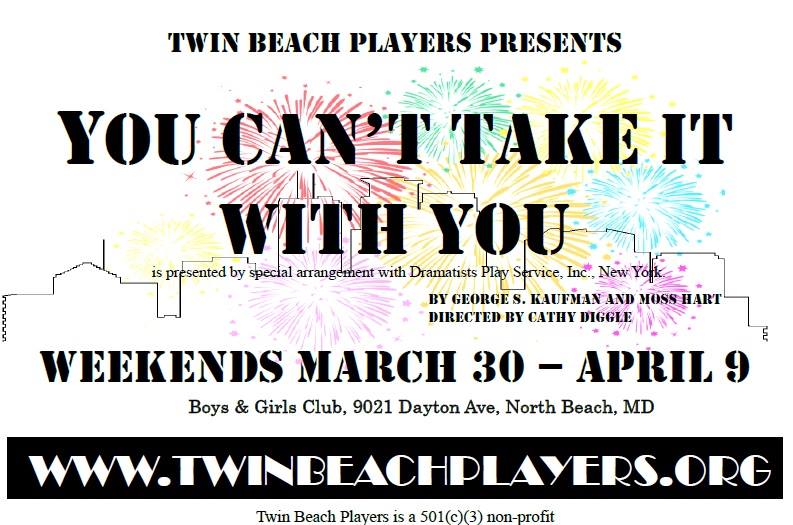 Every family has one. Alice Sycamore is that one. She’s the normal one. She isn’t raising snakes and sneaking off to commencement ceremonies like grandpa; she isn’t creating and exploding fireworks in the basement like father; she isn’t writing sex-starved plays like mother; she isn’t training for the ballet while making candy like sister; Alice Sycamore is an ordinary run of the mill secretary type. Too bad for Alice the rest of her family is absolutely bonkers! In this humorously good-natured and heartwarming play, The Sycamore Family showcases what it means to be happy by embracing yourself and your family— even if there are IRS Agents, J-Men, G-Men, and zany characters running in and out of the living room like it’s the entryway to the funny farm. The Twin Beach Players offers up a delightful serving of hilarity with You Can’t Take It With You, Directed by Cathy Diggle, and their message is clear. The only thing you’ll take with you when you leave is a belly full of laughter and a heart full of joy.

A true community effort, The Twin Beach Players have once again outdone themselves with attention to detail and craftsmanship when it comes to painting a scenic picture. Set Designer Sid Curl gets a rich red interior on the Sycamore family living room walls, similar to a robust Cabernet Sauvignon. With paintings on the walls, furnishings everywhere, and homey touches that provide a detailed look into the peculiar lifestyle of the family, Curl’s scenic work is not only functional but fashionable. Combining carefully constructed entrances, like that to the kitchen, basement, and hallway, with Sound Effects Designer Rick Thompson’s work, a great deal of the catastrophe, whose end result is hysteria and hilarity, happens quite soundly in the cozy little set Curl has cultivated.

Thompson’s sound work is impressive. Whizzbangs that fizzle when the fireworks go haywire, a hearty and resonate ringing whenever the doorbell goes off, and a clattering crash of the door itself, which almost reads farcically, every time Donald rushes out through it— just to name a few— are what Thompson is bringing to the production by way of sound. This design approach, along with the simple light plots developed by Lighting Designer Melissa Nikolaus, who uses a great many footlights to keep the set in plain view, creates a well-rounded aesthetic experience, both visually and aurally, for the production.

One of the most striking design features is what Makeup Designer Wendy Cranford is doing with her aging techniques for various actors. Given that a great many of the characters are quite aged, and a great many of the actors who have turned up for the show are not so advanced in their years, Cranford has taken her sublime facial artistry skills and put them to good use. Characters like Grandpa and Paul Sycamore appear appropriately generationally gapped, allowing the younger characters to seem even more youthful in their appearance. Complimenting these makeup techniques, Costume Designer Dawn Denison puts her sartorial selecting prowess to the test. The hideodeous pink dressing gown is perfect for Penny, so too is the fluffy pink lace atrocity for Essie. Denison works her wardrobe wonders all across the board, particularly with Alice’s final outfit— a powder blue fitted ensemble with darling matching hat that is perfect for the time period.

Director Cathy Diggle has her work cut out for her; crafting constructed chaos without it devolving into a catastrophe is no easy task. Several times— most often as scenes draw to a close— there is a cacophony of sounds and dervish of action spiraling about on the stage into one jumbled maelstrom of movement and sound. Diggle allows the natural swell of these moment to occur without creating true chaos in its wake. The show’s blocking and spatial awareness is also tightly honed, each character having a bubble of the stage wherein they primarily exist. Diggle blocks the characters into this curious bubbles, which further augments their unusual quirks— like placing Penny and her typewriter in the upstage left corner or Grandpa and his chair downstage center. While the show’s overall pacing has a few hiccups, things should tighten as the run progresses, and ultimately Diggle has done a solid job of focusing on the heart and humor of the piece in the process.

The show is an ensemble piece for certain, but all 17 actors get their moments to shine. Whether it’s the G-Man (EJ Roach) hollering up from the basement unseen or Rick Thompson who plays the J-Man and earlier the IRS Agent— both awkwardly humorous characters, everyone gets noticed. There are of course a few scene stealers who take notice more than others. Jeanne Louise as the drunken Mrs. Wellington comes immediately to mind in the vein as her momentary cameo of consciousness is an uproarious moment wherein all eyes are focused on her drunken swagger, slurred speech, and ultimate face-plant into the couch. You couldn’t miss her if you tried— and you definitely don’t want to for all of the hysterical shenanigans she brings to her few moments’ glory— because her dayglow outfit is bright enough to wake the dead and is accompanied by absurd shoes!

Bold, boisterous, and equally scene-stealing, though in a far different capacity are Boris Kolenkhov (Kevin McAndrews) and the Grand Duchess Olga Katrina (Angela Sunstone.) Both performers sport hearty Russian accents, which sound quite authentic as well as consistent when they speak. McAndrews fancies up the role by clicking his heels in a militaristic yet snappy fashion upon introductions while Sunstone steals the thunder from one of the penultimate moments in the show by bursting in from the kitchen belching about her blintzes. Both McAndrews and Sunstone have delved deeply into the threads of these cameo style characters and given them potent personalities that stand out for miles.

The “normies” from the outside world— Mr. Kirby (Tom Weaver) and his delicate digestion, Mrs. Kirby (Lindsay Haas) and Tony Kirby Jr. (Josh Scott)— have no idea what they’re in for when they encounter the Sycamores. Well, Scott’s character does as he is dating the doting Alice Sycamore (Amy Prieto.) Scott and Prieto have a swell chemistry between them, the sort that speaks volumes of the affections shared between a couple in that time period. Prieto is a delight when it comes to playing Alice; she balances her affection and enthusiasm for her family perfectly against the worry and distress that her bizarre family causes her when it comes to the notion of introducing them to others. Listen to her vocal inflection and watch her facial expressions, especially when things get wonky.

Popping in and out of the living room as if he lived there, Donald (Tyler Vaughn) adds an element of farce to the performance, constantly coming and going through doors at the beck and call of his girlfriend Rheba (Aaliyah Roach), the household cook and maid. Both Vaughn and Roach have a firm handle on the patois that their characters use to differentiate their classes from the Sycamore family and both performers are instrumental in keeping Prieto’s Alice from becoming too high strung and distraught when the situations grow to be precarious.

Sliding down the scale into the deeply flowing tides of odd, Ed Carmichael (Aidan C. Davis) and his lovely wife Essie (Jenny Liese)— formerly Essie Sycamore— add queer flavoring to the already peculiar family fruits running about in the Sycamore household. Davis’ deliberate approach to his character’s speaking patterns make some of his more exasperating moments that much funnier while Liese’s enthusiasm and exhausting attempts at her ballerina physicality heighten her humors as well. Watch Davis’ facial expressions when confronted by the J-Man late in the second act— its priceless! Soo too are the facial expressions that Liese delivers when trying to impress Mr. Kolenkhov whenever she takes to attempting her dance moves.

Bumbling about and making good on his comedic shtick work, Sid Curl plays the supreme oddball Mr. De Pinna. Holding poses that would make a statue bust a gut laughing, Curl goes hog wild into the nonsensical end of the character and dodders around in his own little world without much thought outside of his personal bubble. This is particularly humorous when he goes dashing into the basement; the way Curl takes to running is a hilarious sight gag all its own. Pairing this with some of the wittier remarks thrown his way, Curl becomes one of the comic carries in the production.

Just as doddering though in a completely different fashion, Paul Sycamore (Frank Antonio) has his own tunnel of existence that seldom extends beyond the others around him, excepting the aforementioned Mr. De Pinna and his wife, Penelope (Rachel Cruz.) Antonio brings a childish exuberance and youthful spirit to the character of Paul; this is particularly impressive when it comes to handling the fireworks that he plays with throughout the production. Cruz, who is zany but reserved— the matriarchal loon as it were— finds little ways to make her character pop off the stage. Surprising Alice and Tony in her ridiculous pink dressing gown is just one of several scenes that really take the cake when it comes to her hilarious outbursts. Cruz also finds balance in the character of Penny Sycamore, making her a mother and a crazy all in one.

Spearheading the whole fam-damily is Grandpa (Jeff Larsen.) At first glance he’s nothing serious, but as the play progresses, he is mysterious. Larsen’s character work is impressive as it toes the line between quirky humor and heavy sincerity. Towards the end of the production, Larsen imports the moral of the play and its titular meaning with a healthy dose of genuine reflectiveness into his monologue delivered at Mr. Kirby. Even when he spins humorously irreverent inflection to portions of this speech, there is something strikingly sage about the way he speaks these words of wisdom. Larsen has animated facial features and a lot of times his one-liners are accompanied by these expressions that overtake a scene entirely. Remarkable for the way he stays focused and present, even when his character shuffles into the hum of the background, Larsen is the root of the family tree— even if it is growing sideways across the lawn.

A touching piece of theatre where you will laugh, enjoy yourself, and even tear up a little, You Can’t Take It With You is putting the heart and talent of The Twin Beach Players on display this spring for all to celebrate.

You Can’t Take It With You plays through April 9, 2017 at The Twin Beach Players in the North Beach Boys & Girls Club— 9021 Dayton Avenue in North Beach, MD. Tickets are available for purchase at the door or in advance online.