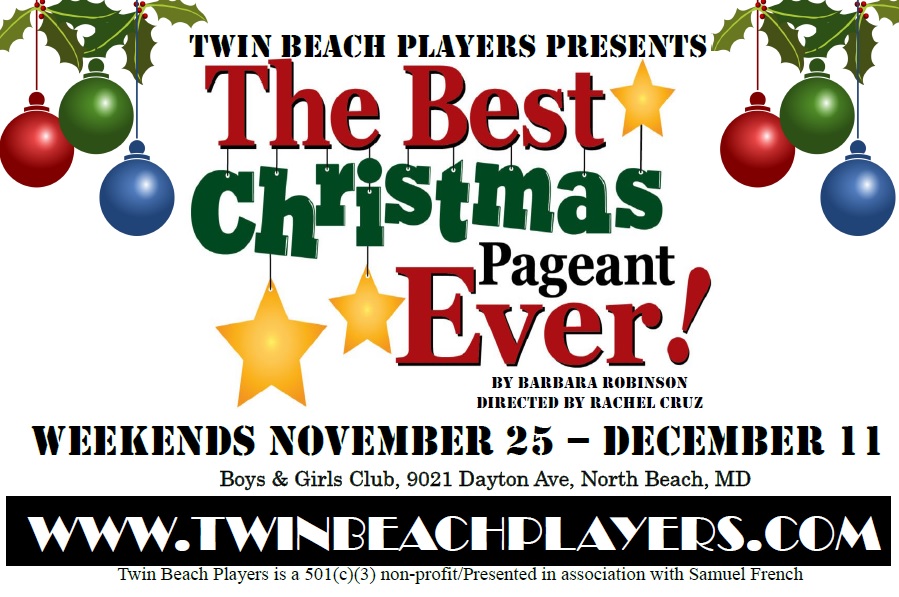 It’s that time of year…the lights go up, the shoppers rush around with their treasures, every theatre in town starts producing A Christmas Carol, cookies go into the oven, and every church in town starts practicing for their Christmas Pageant. Someone got the holiday wires crossed as The Twin Beach Players open their festive production of The Best Christmas Pageant Ever! Directed by Rachel Clites Cruz, this delightful family fun holiday show is a reminder of what the spirit of Christmas is all about and it isn’t exactly what you think! When cranky old Mrs. Armstrong (Angela Knepp) breaks her foot and can’t host the annual Christmas pageant, it’s up to Mother Grace Bradley (Terry McKinstry) to take up the reigns and make sure the baby Jesus is celebrated away in the manger. But things get complicated in a hurry when The Horrible Herdman siblings— who have never set foot in Sunday School a day in their life— show up wanting to perform in the pageant! Definitely a wild and entertaining affair, The Best Christmas Pageant Ever! is one for the books this season!

From a technical standpoint, The Best Christmas Pageant Ever! is reflective of the true community spirit that infuses every production at The Twin Beach Players. Director Rachel Clites Cruz, doubling as the Set Designer, with the assistance of Set Construction Master Chris Kent and his team of volunteers, brings a simple yet beautiful church space to life for the show. Stained glass windows painted onto the set create the illusion everyone hopes for in a religious setting, and it’s Cruz’ sharp spatial blocking that gives the open place space multiple little segmented spaces for different scenes— like inside the Sunday School Room and at Mrs. Bradley’s house— a chance to exist. Lighting Designer Sid Curl steps up to the plate and delivers a home run in assisting these demarcations with his tightly focused area lighting. The focus spotlight for the narrative character of Beth Bradley is also quite useful here.

Costume Designer Dawn Denison and Makeup Consultants Wendy Cranford and Delainey Nikolaus are well worthy of some holiday praises here too. Though the costumes are simple, modern day appropriate church affairs, Denison make sure that they all look quite sharp for the actual performance of the pageant— everyone from the host of Baby Angels (Carsyn Baker, Quicny Baker, Mikey McKinstry, Bridget Puttlitz, and Leah Rannacher) to the stuffy old ladies of the church parish (Sidney Baker, Taylor Baker, Lindsay Haas,  Angela Knepp, Aaliyah Roach, and Rebecca Ulmschneider) look their best when it’s time to perform in and attend the pageant. Cranford and Nikolaus are responsible for making sure that Herdman children, all six of them, look their grungy best. With dirt and fiendish makeup plots to make them looking like the ornery little urchins that they’re meant to be, Cranford and Nikolaus achieve this look successfully.

It’s a delightful little holiday pageant and although there’s not as much singing as one might expect, when the group comes together to sing it does sound heavenly. Soloists Elizabeth Cullens, playing Maxine— the reader of the scroll during the pageant— and soloist Ashley Vernier, playing Alice Wendleken— the previous year’s pageant’s Mary— lend their divine voices to the end of the show and make the Christmas service feel complete. Other cameo performances that deserve a nod include the confused and comedic Reverend Hopkins (Jeff Larsen) and the cantankerous holier-than-thou Mrs. Armstrong (Angela Knepp.) Performances like these all across the board keep the program rolling along smoothly bringing great entertainment all evening long.

The zany Father, Bob Bradley (Frank Antonio), keeps trying to duck out of the pageant but the good-hearted, strong-willed, and stubborn minded Mother, Grace Bradley (Terry McKinstry) simply won’t let him. Antonio is sharp with his comic moments, particularly when it comes to his involvement in the pageant at the end— keep your eye out for his adorable moment with one of the Baby Angels. McKinstry delivers a strong female character made of faithful and optimistic stuff. The moment she shares with Imogene Herdman (Emma VanBuskirk) is truly touching just as they head into the final moments before the big pageant scene.  Keep your eye on Charlie Bradley (Luke Rannacher) too, he’s got all sorts of little comic gems waiting to pop out of his mouth!

The Herdman children are indeed something else. As mentioned, Emma VanBuskirk in the role of Imogene, has a true change of heart, making for a real sentimental and cathartically rewarding moment when the pageant finally hits home for her. Leroy (Cody Baxa) makes his fussing heard, especially when it comes to making jokes about Mary being pregnant! (Who knew that it was improper to state the virgin mother was pregnant?) But it’s Gladys (Melly Byram) who’s a real scene-stealer. Appearing in the pageant as the Angel, with her own unique twist on how those lines get delivered, you might just call her a scene-stealing ham! Ollie (Sena Weaver) Claude (Emily Ingle) as well as Ralph (Ryan Dickson-Burke), who ends up playing Joseph opposite his sister Imogene, make up the other half of the trouble-making sextet that are the hellacious Herdman children. Each one finds a moment to shine and sparkle, most often when they’re making menacing gestures and facial features at the other Sunday School Children.

It all comes down to Beth (Ellee VanBuskirk.) As the typical teenager, VanBuskirk narrates the show with a slightly dramatic flair. Having full insight on the story, revealing it bit by bit in little focused spotlight scenes at the top and bottom of each major scene as the show rolls along, VanBuskirk keeps the audience on the journey with her, really showing us how Christmas miracles can happen if you just have a little faith.

A delightful good time for the holidays— pack the wife and kiddies in the family car and drive on down to The Twin Beach Players for The Best Christmas Pageant Ever! It will definitely be the best one you see this holiday season!

The Best Christmas Pageant Ever! plays through December 11, 2016 at The Twin Beach Players in partnership with The HELP ASSOCIATION, in the North Beach Boys & Girls Club— 9021 Dayton Avenue in North Beach, MD. Tickets are available for purchase at the door or in advance online.