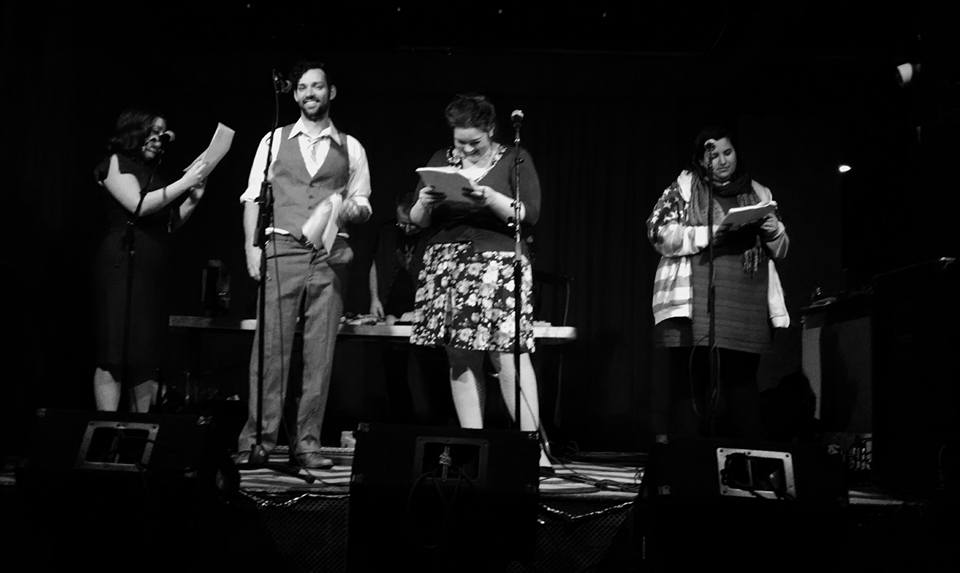 November brings daylight savings time, which means it’s time to dim the lights an hour early! It’s 8:00 o’clock on the last Monday of the month, and if you know what’s good for you, you’re anxiously awaiting the master of the macabre, the antiquarian of the insane, Horatio Dark himself as he reads between the lines of reality for the monthly installment of his radio broadcast! Appearing now at W-IND, tune the dial, turn up the volume, sit back, and prepare for a night of 1950’s radio plays that will give you the mid-autumnal chills!

Alone in the Marcootery, due to unforeseen illness, Foley Master Dave Marcoot managed to bring solid live sound effects for all four installments featured in the November edition of Horatio Dark’s Between the Lines, featuring a newly procured Theremin, among other well-tried and trusted effect making toys. Staying on top of the various sound effects, including the marching board featured in the final script, was a task to accomplish unaided but one that Marcoot rose to valiantly.

The evening’s performance saw Jon Freedlander carrying on the iconic Horatio Dark host, with his deliciously affected voice giving everyone the chuckles with some of the finest and punny-est written intros and outros to the scrips that have been featured in quite some time. Aaron Travis stepped up to the plate to open the performances as the Radio Announcer, giving those “Communism & Truth Dollars” advertisement slots a real punch of panache. The “C&TD” ad segments, which appear as the ‘commercial break’ between each half of a radio script, are a hallmark of W-IND’s broadcasting network and engage the ‘studio audience’ quite thoroughly.

The Deep by Dave Kaye.

A new twist on an old trope, The Deep by Dave Kaye featured a 20,000 Leagues Under the Sea meets Shatner’s infamous plane flight from The Twilight Zone with a hint of Moby Dick thrown in for good measure. Featuring a team of scientists plunging the depths of the ocean, and potentially diving deep into the madness of the human psyche, Kaye’s script included four characters which fit the bill of a submerged aquatic radio drama quite nicely. Dr. Warfard (Todd Gardner) served as the sound voice of reason aboard the vessel while it was Dr. Collier (Miriam Doyle) was the upstart researcher among the group. Kaye’s nod to 1950’s sexism did not go amiss when Captain Hannen (Scott Burke) addressed Doyle’s character without her proper title, forcing her to remind him of such; it resurfaces later in Hannen’s line “we can’t just change course because of your woman’s intuition.”

The highlight and success of Kaye’s script was the vivid noir-esque descriptions of both the aquatic life and the submarine interior, all delivered almost journal-entry style from Brooks (Mike Jancz), both an in-scene and narrative character. Burke, as the boisterous Captain Hannen, delivered a highly affected accent to get his authority established from the get-go. But it was Mike Jancz’ stressed panic and rocket-launch into madness that captured the intensity behind the twist coming from the end of the script. Jancz’ scream was particularly effective, giving the audience the build-up required to appreciate the shocker of an ending.

Line of the Script: “Oh, I believe it’s incredible, as in not-credible.” ~ Captain Hannen to Brooks.

SFX of the Script: The crank-handle sound of the submarine portal door.

Featuring the second installment of a series-in-progress, Mike Jancz revisits Solomon Bell: Time Detective, after its inaugural episode in September of 2015. Working over and revitalizing another old-school science-fiction style trope, Jancz plays with the boundaries of time travel, making the character loop of possibility a wibbly-wobbly timey-wimey experience. Every angel can be their own angel, right? The gritty noir approach to the titular character, voiced by Nairobi Collins, is what gives the script its edge, particularly when it comes to some of the observational lines that Solomon Bell, referred to as Sol, delivers. With a masterful handle on turning a phrase, with things like “put your rump on the stump” and other little dated jargon, Jancz gives a clear-cut image of the era in which he’s writing, never once letting the notion of time travel get in his way of clearly establishing the classic period.

Jancz’ creation of the character of Myrtle (voiced stupendously by Alix Tobey Southwick) is the real kicker in the series. Saucy, seductive, and sensual, this guardian at the crossroads of time is an utter delight in addition to being a functional plot-device. Southwick’s sensational approach only makes Myrtle that much more appealing, and for all of her appeal, she deserves the title of show-stealer. Cameo performances worth noting include Brendan Perry as the punchy bartender Smitty, Lori Travis as the sputtering young child, and Emily Ward, whose character is the catalyst for Solomon Bell’s current case. Ward plays Sister Mary Ellen, an angel-seeking sister who finds herself in need of a time-traveling detective, and does so with a sweet disposition.

Line of the Script: “Nobody gets into heaven without a pit-stop in purgatory. Wink. Wink.” ~Solomon Bell.

SFX of the Script: The gentle laps of waves as Sister Mary Ellen swims out to save a drowning child in the ocean.

The Mechanic: An Agents of Chrome Mystery by John Higgins

All your favorite characters have returned, and upgraded! Rebranding the series under its new title, Agents of Chrome, John Higgins brings back Bennington Marcus (voiced to perfection by Rex Anderson) and Theo16 (voiced to perfection by Jeffrey Gangwisch) and all of their noir-drama detective work. Continuing on in the series, with a few kinks all worked out, Higgins’ signature style of bringing the heavy to the radio drama is back in place and really kicking into high gear with the latest installment. Tackling the poignant and relevant topic of Transgender hate crimes in this script, Higgins finds a fluid way to really invest the audience in this gripping installment. Highly nuanced and extremely detail oriented, Higgins’ newest Agents of Chrome Mystery follows the gumshoe duo in their new but continuing adventures as if they never stopped. His beautifully written but emotionally heavy script is a staple in the evening’s radio drama programing.

Stealing the show’s thunder, the cameo appearance of The Chief (as boasted boisterously by the insanely talented character-voiceover actor John Bennett) is the hands down “winner of the script.” Shaggy Wilcox makes his Horatio Dark 2016 debut as Walter Wilson, giving a strikingly evocative performance that really punches the heartstrings with a heavy hand of grief. Recurring regulars like Lori Travis as Doc Paige and Allyson Washington as Doctor Goldmeyer lend their talented vocal skills to the script, making it that much more dramatically intense. Jeffrey Gangwisch delivers, as always, his perfected robotic patois that sets the tones for all chromes. This gives Scott Burke, who plays Dalton44 aka The Mechanic, a benchmark to shoot for in his cameo role. Rex Anderson, as the chrome-handed Bennington Marcus, is perfection in the role with his sublime vocals lending that perfect balance of noir grit and live-action angry-blooded gumshoe to the performance.

Line of the Script: A TIE! “Jerry led us to a bar called Silver Balls, it was a kind of bluntness that human dandies wouldn’t have and I was getting an itchy feeling.” ~Bennington Marcus (in noir narration.) AND “This is the second time you two knuckleheads have turned in a case report with more malarkey in it than an Irish marriage proposal!” ~The Chief.

Continuing on their endless planet tripping adventures, this month Rex Pylon (Derek Vaughan Brown) and his sidekick Dot (Vii Lee) find themselves on a strange planet— The Inquisition Planet! Featuring the return of Maeve Yeager, voicing Mable the frightened and increasingly desperate citizen, and Becky Hackerman, voicing the ruthless Inquisitor, it’s astonishing to say that not one “nobody expects the inquisition” joke was made in the making or reading of this script. Horatio Dark’s script is true to practice, particularly when it comes to Rex Pylon’s overly dramatic JUDO-*insert-fight-maneuver-here*! Jon Freedlander deserves a special nod here for his distinguished garble-mouthed mob-voice gook in the “angry mob outcry” portions of the script’ it’s damned funny.

Vaughan Brown and Lee are particularly enthusiastic for the “Atom-O’s” advert plug between the first and second segments of the script, a monthly staple that really revs the audience into the era of the 1950’s sci-fi radio adventures. The hilarity ensues as things grow hairy on The Inquisition Planet, with both Vaughan Brown and Lee showing the delightful mayhem of ‘live theatre’ in the audience’s midst. When a page-fumble results in an epic series of laughs, Vaughan Brown’s quick and classy recovery is even more hilarious than the mishap, but Lee outdoes them both with her delivery of the below-mentioned, “line of the script.”

Line of the Script: “Oh, Rex! Every word this gal says make me wanna sock her right in the puss!” ~Dot

SFX of the Script: The marching board creating the sound of the angry mob on the move.

Conclusion: A delightful evening of series both old and new, and a brand new one-off non-sequitur that delighted the audience just as well, the November broadcast featured quite a plethora of pleasing performances.

Missed a broadcast? No problem! You can hear Horatio Dark’s Between the Lines online as an uploaded podcast. Just click here.  (with a new site coming soon!)

Horatio Dark’s Between the Lines will return to The Wind-Up Space on December 26, 2016.