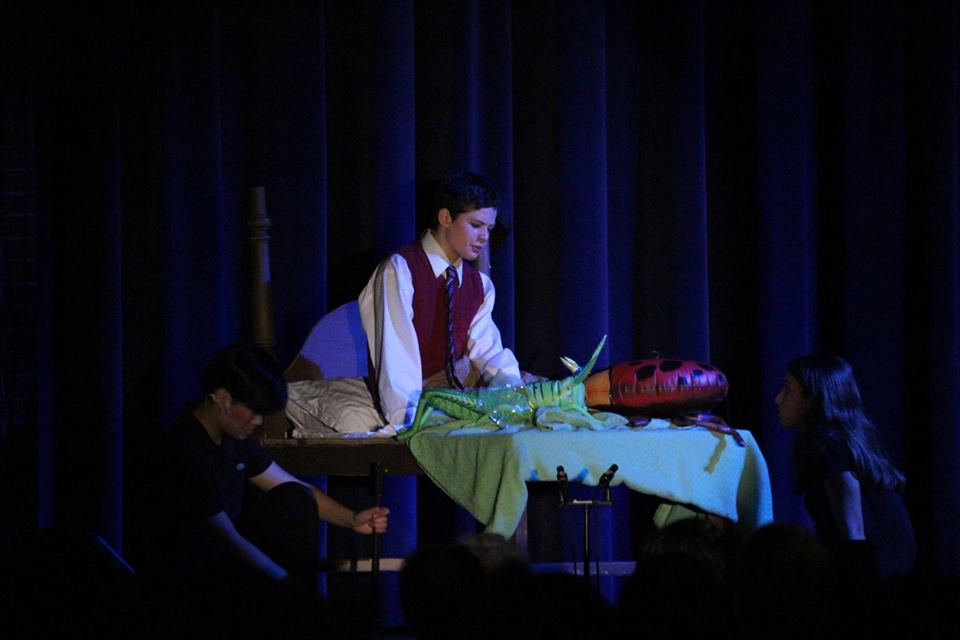 Appearing as a special one-weekend-only engagement, the production of James and the Giant Peach Jr. featured students from Loiederman Middle School in every role imaginable from the performing principles, to the dancing ensemble, through to student directors, tech crew, designers, and backstage helpers. Even more amazing and mind blowing was the notion that the production was being performed not only for friends and family in the evening of the weekend run but for three very special mid-school day matinees, elementary aged students from nearby schools were shuttled in by the bus-load to experience live theatre, some for the very first time!

The production itself was a smashing success, with dancing that rivals some well-organized community theatres in regards to the quality and caliber of the choreography. Most of the students involved with the production do not have outside dance training or exposure and learned these fantastical feats for their fantastic feet through the Wheaton Arts on the Road Program. Students like Hellen De Oliveira, who was the Dance Captain for the production, and Aribya Henries, who played the dancing rhino as well as a dancer in the ensemble, had high praises for the experience.

“It was a challenge having to choreograph the dances for the leads and not be in those numbers. Plus we only had six weeks to learn all of this choreography,” De Oliveira said when asked what the challenges of being a student dance captain was. “My favorite number is probably “Shake it Up” because it’s got so much movement and is just a lot of fun.” Henries had a similar experience, citing how much fun the whole process had been and when asked what it was like to dance with a Rhino puppet, she said, “It was kind of difficult because you have to hold this big prop while you’re dancing but it was cool to get to dance and make that illusion come to life. I’m having a lot of fun.”

Getting to talk with a great sampling of the students involved only reassured the belief that the program is having a profound impact on everyone involved. Daisha Budd, who played Auntie Spiker, and Sophia Palacios, playing Auntie Sponge, are real-life best friends and were thrilled at the opportunity to play opposite one another as wicked sisters. “It’s quite different from other characters I’ve played before, but I love the character and it’s quite fun!” said Budd in regards to playing the nasty Spiker. “I love getting to play with my best friend,” said Palacios when asked what she loved most about getting to do the show. “Plus Sponge is so dumb that it’s just fun to play her. Though we both do love food, so I guess I’m a little bit like her too!”

Of course not every student wants to be in the spotlights and the program has offered tremendous opportunities for that side of things as well. Rachel Mayo, who was a makeup and costume designer for the show, said “I love doing makeup and costumes. I don’t want to be in the ensemble because I have too many other activities I’m involved in, but getting to do makeup and costumes lets me still do theatre without having to perform.” Reid Duran, a student director, said the process was a “great experience for me and I definitely want to keep doing it.” This was Duran’s first time being a student director and she enjoyed it so thoroughly that she cannot wait to do it again.

In addition to providing all sorts of involvement opportunities, the program also opened the doors of theatre to those that had previously never gotten involved. Angel Soriano, playing Ladahlord (the narrative lead character) made James and the Giant Peach Jr. his first production. Giving a stellar performance as the enigmatic character, when asked about where he was finding his inspiration as a first time performer, Soriano said, “I don’t know, it just sort of fits with me. He pops up everywhere, he’s this old, crazy, enthusiastic guy who likes to do stuff. That’s me. But I’m not old.” Morgan Hemby, on the opposite end of the performance spectrum, said James and the Giant Peach Jr. was her fifth production but she’s still loving every minute of it. “The energy and music are energetic! It’s fun! It’s zany!” she said when asked about how this show was different from other shows she had done.

Other students spoke highly of all theatre experiences they’ve had, including this one with the Wheaton Arts on the Road Program. Max Berlove, playing male spider and in the ensemble, said that his favorite part of being in the ensemble is, “…getting to do all the different types of characters and people all in one show.” This is Berlove’s third performance show with two additional shows where he participated in the technical side of things. Speaking with Grace Walsh, who was part of the student education team, we learned that theatre can amaze even from outside the hands-on element of it. “I organized the travel of the students,” she said when asked of her role in the production. “It’s the first time I’ve participated in a musical and it’s definitely a different energy than a play, way more energy. But you can definitely tell everyone is having fun. It’s my first time in crew too and just to see how much work in that one aspect is, is just crazy and amazing to me.”

Even the lead performers were having a down to earth experience with the production. Nathan Hillman, playing Earthworm, said, “The costume is a little uncomfortable but I like how Earthworm is scared of things because he fits my personality.” This is also Hillman’s first production ever and he could not speak highly enough of how much fun the experience has been. Mitchell Ngwenya, playing Spider, loved the experience saying it was “Cool and so much fun.” Ngwenya cited “Plump and Juicy” as the favorite number because, “I use all my energy in that song and I get to dance!” Danny Tran Ho, playing Grasshopper said, “My favorite part of playing Grasshopper is the fatherly vibe of him. I have that with my niece so it speaks to my fatherly side.” And Mason Lipczenko, playing the title character of James, said “…it was a lot of work but amazing!” When asked about the experience. “It’s the best thing I’ve ever done and I couldn’t have done it without everyone else. It’s just been great!” James and the Giant Peach Jr. was Lipczenko’s first time playing a lead role and he loved every minute of it.

With so many positive experiences radiating in waves from the students involved with the production, it seemed almost unfathomable that a magnet arts middle school did not have its own auditorium. Robyn Paley, the Loiederman Middle School Theatre teacher, was grateful for The Highwood Theatre involvement and had nothing but wonderful things to say about the experience, urging everyone to support the project. “It’s sort of crazy that we don’t have our own theatre, but that won’t stop us from bringing theatre to all these students. Theatre is such an important part of learning and life, and I think you see that after having spoken with so many of our students today.”

A remarkable and marvelous experience— the audience, filled with elementary school students galore, concurred. Their cheers and shouts of approval, blended with their marveling in wonder over things like moving strobe lights and all of the dance routines, was proof positive of how miraculous the exposure to live theatre can be at a young age.

James and the Giant Peach Jr. was a co-production with The Highwood Theatre and Loiederman Middle School as a part of the Wheaton Arts on the Road Program.

For more information on upcoming productions and performance opportunities with The Highwood Theatre, click here.

It’s a Wonderful Interview: Getting Wings with David James