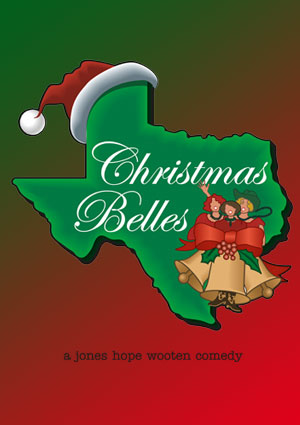 The holidays are all about second chances, and Lord knows the Futrelle sisters are going to need a God’s honest Christmas miracle to make it to the New Year without killing each other and half of Fayro, Texas. Frankie’s overdue with a brand new set of twins, Honey Raye is trying to save the Christmas Eve program at the Tabernacle of the Lamb from going to hell in a holiday decorated handbasket, and Twink’s out of the clink for one night only on a count of good behavior at Christmas. And that’s all before things start heating up and getting interesting! Santa’s passing a kidney stone, the Virgin Mary is running away from Joseph, and the pancake massacre has the whole pageant in literal upheaval. Directed by Jennifer L. Franklin, this hilarious and heartwarming holiday comedy will put the fun in dysfunctional families and make you wonder if you could survive a Christmas with the Futrelle sisters.

Attention to detail is at its finest inside the walls of the Tabernacle of the Lamb down in Fayro, Texas thanks to Set Designer Terry Averill. With stony texturing all against the bricked interior, Averill creates a realistic aesthetic for the church’s walls. Decorating them with tinsel and festive holiday bling, with a little assistance from the Properties Design Team, Averill juxtaposes the sacred nature of a holy space of worship up against the gaudy notion of commercial Christmas with glee. Keeping the setting simplistic and utilizing tightly focused snap-lighting, crafted by Lighting Designer Garrett Hyde, keeps the scenes moving quickly. Keep an eye on Averill’s flown-in scenic pieces as they give the story’s location a little extra pep.

Costume Designer Tiffani Savage takes the Christmas cake, cookies, and pie when it comes to knowing how to find heinous holiday sweaters. Lime green across the board seems to be the motif, if it’s not checkered red and woolly teddy bears. Savage focuses on the bright colors for the holiday show, everything from the outrageously vivid orange of Twink’s county jail jumpsuit to the blinking sequined unitard skater dress of red underneath Honey Raye’s sweater. There’s glamour and glitz rearing its head in true holiday fashion all throughout the show and it only serves to add to the hilarity of the evening.

All in all the show is a wonderful production. A few flubbed lines, and some awkwardly paced moments can’t detract from the utter hilarity and enjoyable shenanigans that unfold throughout the evening. Even the attempt at accents, which wander all through Texas and beyond, only trip the performers up a few times when they’re concentrating more on the sound of what they’re saying than the actual words they’re speaking. These minor notes aside, Director Jennifer L. Franklin finds the honest humor of these larger than life characters and keeps the show going moment to moment, scene to scene, laugh to laugh.

Patsy Price (Anne Hull) arrives on the scene as the stuck-up busybody with a haughty air that wafts off her like stink from a pile of manure in the hot Texan sun. Hull is rolled in arrogance and lets it slither from between her tongue like a snake across the desert. Breaking loose from this reserved arrogance, Hull gets a great and hysterical moment to shine beneath the Bethlehem star once the proverbial ‘it’ hits the fan in the second act.

One of the most endearing moments uncovered in the play comes from Raynerd Chisum (John Degnan) and his delivery of the Christmas Story. But otherwise his country bumpkin backwoods demeanor has him packing the sympathy vote in the aisles. Preciously pathetic and thick as a post, Degnan’s portrayal of Raynerd steals the scene every time he tots through with his wagon muttering in that simple voice, “I love Christmas.”

His preciousness might only be outdone by the young lovers in love, Justin (Paul Pesnell) and Gina Jo (Lily Marx-Webber) who bring their own variety of hilariously ‘special’ into the play. Marx-Webber in particularly is another simplistic delight whose comic moments are mined hard from her ignorant approach to life in general. Rhonda Lynn (Kathryn Huston) just wants to fit in, and in Fayro that shouldn’t be too difficult. Huston has an exceptional sense of comic timing when it comes to the delivery of her one-liners. Convivial on stage and very mindful of how to slide her responses into conversation so that they land naturally, Huston is a fine addition to the cast of comic characters that are happening in the production.

Dub Dubberly (R. Brett Rohrer) makes for one heck of a spunky Santa Claus, especially when the pains start flaring up. Rohrer has brilliant working chemistry with his character’s wife Frankie Futrelle Dubberly (Barara Webber) and their scenes together, especially once they start sharing pains— between labor and the stones— are wonderfully funny. Webber, who possesses one third of the larger-than-life personality of a Futrelle sister, is the most grounded of the three. Speaking her peace and putting her mind out there when it comes to trying to wrangle her two sisters, Webber is the voice of reason for the holiday season in this funny fandango as it unfolds.

Honey Raye (Nina Harris) is all hopped up on holiday spirit, if she can just keep Geneva Musgrave (Joanne Bauer) from raining on her parade. Harris is a hot mess racing around trying to keep her cool while the pageant goes up in a burst of flaming catastrophic instances that fully support Murphy’s law. Between her physical involvement during the hot-flash scenes and her determination to make her production a success, you’d be hard pressed to find a more entertaining performer except for maybe in Bauer’s depiction of Geneva. With a feisty fire roasting under her rump, Bauer has a handle on the Texas sound as well as the Texas ‘tude and really delivers forthright on both fronts. Slapping comedy silly with her snappy responses to Harris’ character, Bauer drives the excitement and turmoil of the play continually as it progresses.

In a throw-down show-down for who can steal more scenes with their comic antics, silly shenanigans, and overall commanding stage presence Twink Futrelle (Edye Smith) and Sheriff John Curtis (James McDaniel) go head to head in hysterical scenes that leave you laughing in the aisles. Smith delivers a vivacious portrayal of ‘The Felon’ of the Futrelle sisters, so bright that it matches her orange jail jumpsuit. Hopping up and down while tied to the chair is one of her finest scene-stealing moments and her facial expressions while attempting to plot revenge are simply divine. McDaniel has a John Wayne marching gait that gives his character an extra comedic undertone in addition to the wily delivery of a great many of his lines. Between his flirtation with Twink and his solid advice to the young pastor, McDaniel has an earnest calm to his delivery making it highly humorous. Watch out for the scene-stealer moment near the end of the program between McDaniel and Smith as it’s truly a present fit for a king.

Delightful, hysterical, and truly touching, Christmas Belles is the perfect stocking stuffer for this holiday season. Don’t miss your chance to see it as it won’t be lingering much longer on the stage of The Bowie Playhouse!

Christmas Belles plays through December 20, 2014 with Bowie Community Theatre at The Bowie Playhouse— 16050 White Marsh Park Drive in Bowie, MD. For tickets please call the box office at (301) 805-0219 or purchase them online.

Review: An Act of the Imagination at Bowie Community Theatre

Review: A Tomb with a View at Bowie Community Theatre