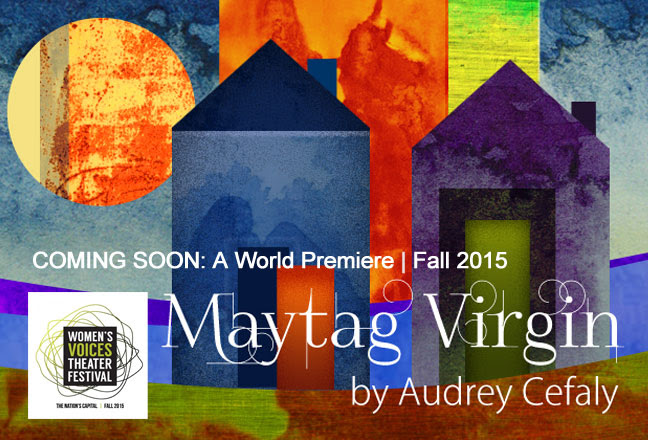 The smartest thing you can ever learn is that you don’t have all the answers. Not to life, not to death, not to love. In a strikingly beautiful and evocative world premier work, playwright Audrey Cefaly debuts her new play Maytag Virgin at Quotidian Theatre Company as a part of the Women’s Voices Theater Festival. Directed by Cefaly, this two-person heartwarming tale explores how fragile human life can be, and how even among the shattered debris of ruined life true beauty can be found. A startlingly emotional journey wherein Cefaly takes the mundane and makes it marvelous, wherein the banal becomes beautiful, this play is a radiant gem of light into the ordinary struggles of love, loss, and life.

Set in the fictitious town of Lenoraville, Alabama, a charming small town of the south, Set Designer Scott Hengen and Properties Master and Set Decorator Heather Brooks create a whimsically stunning aesthetic that still lays its roots in reality. Hengen crafts two lifelike back porches of sturdy old houses, one in riveting blue and the other in a faded but lively purple, and they serve as the two bubbles of existence which encapsulate the nuances of Elizabeth Nash and Jack Key lives in their structure. Brooks add tasteful and elegant décor to both porches in an intricate notation of their personalities. Elizabeth Nash has a feminine creativity to the accoutrements that are mounted on her porch walls while Jack Key’s radiates a more subdued yet rustic country charm. The combined efforts of Brooks and Hengen create a picturesque backdrop that takes this fictional setting and welcomes it into reality.

Sound Designer Ed Moser, working with Lighting Designer Don Slater, focus on the subtle augmentation of the show’s overall aesthetic so that the audience can easily become engrossed in the story. Moser’s musical choices are haunting and folksy, with an earthy indie sound that resonates through them as if designed for the televised film version of Cefaly’s play. These musical interludes populate the scene changes and the moments of silent exchange that occasionally occur before and after a scene’s natural dialogue and really guide the audience into the emotional experience of the show. Moser’s sound effect work is also on point, from the soft rumbling and eventual buzzing of the dryer to the heavy storm that settles into the act I finale, exhibiting his ability to compose reality into the narrative story of their existence.

As the show’s Playwright and Director Audrey Cefaly has a sharp understanding of the work she’s written and how to actualize the vision she intended for these characters in such a way that maximizes their story’s impact upon the audience. Truly a master of natural dialogue, Cefaly fabricates conversations between Lizzie and Mr. Key that arrive in earnest, float with brilliant awkwardness, and reverberate with layers of sentimentality that are the truthful core of the human heart. Addressing the difficult subjects of love and loss as well as rebuilding from the shattered fragments that such a life can leave behind, Cefaly’s work is poignant and emotionally glorious, remarkably focused on how the simple things can be so complex.

Cefaly’s takes what could easily be dismissed as a basic love story and gives it a rich undeniable depth, a heartfelt unforgiving soul, and earnest emotional vulnerabilities that are both foreign and relatable, making the piece compelling and touching all in one go. Reveling in unspoken moments, Cefaly’s directorial mind allows great emotional swells to come to fruition often in the unsaid spaces of her dialogue. This is a perfect unison of showing and telling all within one story. Cefaly’s work is brilliant, both as a playwright and as a director, and to experience it, is indeed a rewarding afternoon at the theatre.

Having penned two perfectly opposing characters in Elizabeth Nash (Gillian Shelly) and Jack Keys (Will Hardy), Cefaly finds two stellar performers to take on the roles and deliver them with exceptional justice to her writing. Open, vulnerable performers, with tremendous versatility in their delivery, both Shelly and Hardy make this production extraordinary. The chemistry that blossoms, albeit languidly, between them is both telling of their abilities to react and respond to one another on stage and a watermark of the intrinsic tension and humor Cefaly has folded into the text.

Will Hardy as the charming southern gentleman Jack Keys is the more internalized character of the pairing. His energy is present, though muted in such a fashion as to show true contrast between his carefree ways and the spastic nerves of Elizabeth. Easing into the situation with a natural humor, Hardy delivers some truly thoughtful moments that give the mind and heart great pause. His slow, deliberate twang makes his voice even more palatable to the ear and his overall demeanor serves the work well. There is often a great deal said in his facial reactions and bodily gestures in response to the situation as well, his overall engagement as the character very rewarding.

Gillian Shelly delivers an enigmatic and fascinating performance as the spunky and overly chatty Elizabeth. Lizzie is driven by a frenetic energy that keeps her chattering away and Shelly’s handle on the southern accent increases that spastic inertia tenfold. Balancing the character’s internal turmoil against the giddy-stupid too precious for words flirting that occurs on the surface of their interactions, Shelly embodies the epitome of widowed woman rediscovering the world. Her ability to connect so deeply with the character’s emotions and deliver them so fully is astonishing. Her vulnerable exposure during intense confessions is harrowing and powerful. Running the emotional gamut throughout the performance, Shelly invites the audience along for her journey, one that will stamp the hearts, the minds, and the souls of all watching. Utterly brilliant, Shelly as Elizabeth Nash in this rejuvenating and hopeful world premier is truly worthy of representing the Women’s Voices Theater Festival.

Maytag Virgin plays through November 1, 2015 as a part of the Women’s Voices Theater Festival at Quotidian Theatre Company, the Resident Theater of The Writer’s Center— 4508 Walsh Street in Bethesda, MD. For tickets call the box office at (800) 838-3006 ext. 1 or purchase them online.

Review: The Gulf at Signature Theatre