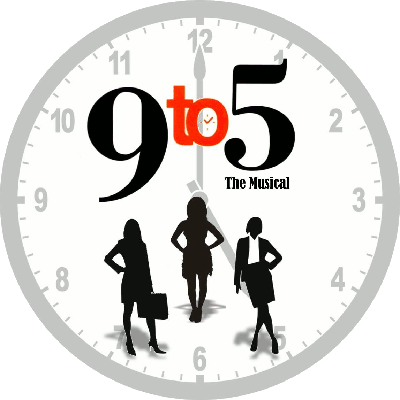 Growing up in the 80’s I had several heroes, one of whom was Dolly Parton. I saw every movie, had every album and knew everything I could about her; I was a fanboy before the term fanboy was used in normal conversation. So getting the opportunity to see one of my favorite movies turned into a musical was extremely exciting for me and overall after leaving the theatre I was not disappointed. Silhouette Stages’ production of 9 to 5: the musical, Directed by Kevin James Logan and Music Directed by Matthew Henry Frieswyk with Music and Lyrics by Dolly Parton and Book by Patricia Resnick, had me humming the tunes the whole way home with a smile on my face.

The story— one that I define as empowering, though not a likely scenario in real life— is one that shows the importance of standing up for yourself and how one person can make a difference. Franklin Hart Jr., the boss at Consolidated Corporation, is a male, chauvinistic pig with a big ego and a heartless and belittling demeanor that uses his power to manipulate the women and men who work under him for his benefit. Violet, Doralee and Judy become fed up with Franklin Hart Jr. and in one of the most memorable moments of the show they poison him and kidnap him. (If you have seen the movie, the musical holds true to the original story, if you haven’t then see the musical and enjoy the ride to how they get in and out of the predicament. I won’t spoil it for you!) The cast at Silhouette Stages uses their wide array of talents to tell the story and make these larger-than-life characters come to life on the stage.

Director Kevin James Logan does a nice job of keeping the pacing fast and allowing the moments to develop properly and organically throughout the entire show. The book is set up in such a way that there is a long first act and an almost too-short second act, which left me wanting more development in the second act. Logan worked magic with the character development of this show. I recognized each and every one of the characters as I remembered them from the movie in that classic way. Though his character development with the actors was great, his blocking left me disappointed. The small stage that Logan had to work on was challenging for such a large cast with as many set pieces and scene changes as there were in the show. The “Bull Pen” scenes were so filled with people and desks that the “overcrowded” tight space that it was meant to represent was so real on the stage that there wasn’t enough room for movement, actors, and furniture. Several times actors appeared to be stuck upstage and behind other actors and actions became awkward.

Even though the small stage was a challenge there were some amazing show stopping moments. Choreographer Tina DeSimone should be commended for her work on this show as the cast was able to execute tough routines with extremely minor imperfections. Understanding the cast’s strengths and playing to them in the dance department, DeSimone found radiant ways of sprucing up the choreography throughout the performance. The stand out numbers of “9 to 5” and “One of the Boys” were exactly what the show called for. The talented cast tap-danced “One of the Boys” like they had been together doing that number for years instead of weeks and when the number was over the audience reaction was well deserved.

Music Direction by Matthew Henry Frieswyk was overall good, however, there were some moments that felt like true standout moments and some moments where I scratched my head. Frieswyk did a great job blending the voices in the big company numbers and the chorus sounded powerful and strong throughout. Violet Newstand, portrayed by Robyn Bloom and Judy Bernly, portrayed by Caitlin Grant each held their own with the music making “Around Here”, “One of the Boys” and “Get Out and Stay Out” the most memorable numbers musically. Musical disappointment came in the form of Franklin Hart Jr. and Doralee Rhodes, both of whom had good and bad moments, but the inconsistency in their singing had me feeling like the show was not able to live up to the epic nature of a show whose music and lyrics were written by Dolly Parton. Musically the strongest part of the show was the orchestra, led by Conductor Tania Rose Bindhoff, which was well balanced and filled the space with toe-tapping music and should be given great credit when many times they are overlooked as a part of the production.

The cast brought a wide range of talent to the stage, among them many people from around the region who I have had a chance to see in many different productions over time. Credit should be given to each of them for the way they handled set issues on opening night— desk coverings that were not secure, pieces of furniture not being placed correctly during set changes, signs (paper) coming off the set and a prop gun that didn’t fire properly— the cast flawlessly worked through those issues without missing a beat in the show, a true nod to the professionalism on the stage.

The portrayal of Violet Newsead by Robyn Bloom was well developed and flawlessly executed. Her comic timing was perfect and her progression from the beginning of the show to the powerful woman at the end of the show was well-defined and evident. Judy Bernly, played by Caitlin Grant was another well-defined character. I was with Grant from the beginning, rooting her on as she struggled to start over and find herself. When she finally stood up to Dick was the one moment in the show I wanted to jump out of my seat and cheer. Maribeth Vogel did it again and astounded with her performance. Having seen her in several roles recently and— full disclosure, having directed her in the past— she was as talented as ever playing the role of Roz Keith, the “assistant” to Franklin Hart Jr. and the one person that was obsessed with him at Consolidated.

Doralee Rhodes, one of the most iconic roles in the show, was performed by Lucy Bobbin and though Bobbin possesses an amazing talent, her performance as Doralee was inconsistent and lacked the development needed to fully portray the character. Part of that problem is living up to the iconic and enormous shoes that Dolly Parton has set to the part, and  the other part of the problem was that each of the three main women grow through this show and Bobbins growth as Doralee wasn’t as evident in her character as it was in her costume. Even with that, Bobbin’s rendition of “Backwoods Barbie” was one of her finest moments on stage, enabling the audience to peek into the heart of Doralee and connect with her.

Richard Greenslit’s performance as Franklin Hart, Jr. is one of the most difficult for this reviewer to be able to talk about because Greenslit was able to create the slime-ball of Hart perfectly – so much so that I hated Hart from the moment I saw him. His acting was spot on as Franklin Hart, Jr., but his singing was weaker than I would have expected. The mismatch of strong character delivery and weak vocal execution was disappointing.

Rounding out the cast, were Nathan Moe as Joe, Justin Moe as Dwayne Rhodes, Neal Townsend as Dick Bernly/Bob Enright/Detective/Guard, Douglas A. Thomas as Russell Tinsworthy/Doctor, Constance Lewis as Josie Newstead, Beth Cohen as Missy Hart, Rachel Leann Kemp as Maria Delgado, Renata Hammond as Kathy, Jen Retterer as Candy Striper, Lisa Rigsby as New Employee, and Mary Guay Kramer, Tracy McCracken, Ellen Welsh Quinn, and Rebecca Unkenholz as the typing pool. Each of these cast members did a fine job in their roles, but special mention has to be given to Angie Townsend in the role of Margaret Pomerance. Townsend portrayed the drunken woman with perfection and the comic timing of a professional actor. When Margaret returns from rehab, Townsend’s ability to change was impeccable. She left me wanting more and I hope to see her in future productions as she was a joy to watch on the stage.

Costumes by Sharon Byrd were period appropriate and took me straight back to the late 70’s and early 80s’s. With several exceptions, 3 pairs of nude-colored tap shoes, a black top that was shinny when all others were flat, and a dress on Doralee that accentuated the wrong part of her body, the costumes were consistent and enjoyable. The Set Design by Alex Porter was minimalistic but poorly executed.  The backdrop, though representing a city, did not compliment the actors and became distracting when the lights on the cyc behind changed. The set painting and construction needed a little more fine tuning to make for a more polished production.

Lighting Designer Bob Frank worked hard to light a fast-paced musical in a restrictive space, however, there were some issues with inconsistent spot usage, uneven washes, and inconsistent light levels that left certain areas of the stage brighter or darker than others when they should not have been.  The Hair and Make-Up Design by Tommy Malek took me right back to the movie and the time period. With as many cast members as Malek had to work with he should be commended for the consistence and accuracy of the portrayals of the period hair and make-up.

Working 9 to 5 isn’t easy and this cast and crew lead by Kevin James Logan shows us exactly what hardships there can be in the workplace and how to be empowered and overcome those hardships. As I go off to work Monday morning, I assure you I will still be humming the tunes to this show and trying to not let the job drive me crazy as I’m barely getting’ by.

Review: Noises Off at Silhouette Stages