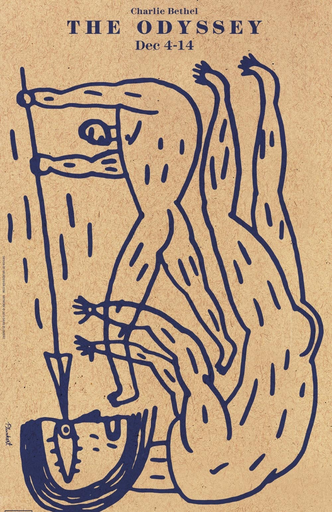 What sort of performance doth await you here? Be it civilized or savage? Humane or hateful? Before the child of morning, Rosy-fingered Dawn, arrives, well, you’ll see exactly what sort of wily adventure you’re in for at Baltimore Theatre Projects. As one of precious few non-holiday shows this December, solo artist Charlie Bethel returns to the stage with his one-man performance of Homer’s epic tale. The Odyssey is Bethel’s adaptation of Odysseus in a fashion the likes of which seems impossible. For an epic so intense the mere notion of a one-man show is mind-boggling but Bethel delivers with truth, integrity, and great waves of amusing entertainment. A limited engagement run, this performance is true to the classic with twists and turns asunder; reminding us of the most important factor in the tale— when Odysseus goes to sleep…bad stuff happens!

Working as the show’s Scenic and Sound Designer, Bethel conceptualizes his version of Homer’s work into a vastly simple construct. The setting is intentionally sparse; furnishings that hint at the notion of a study long abandoned, or a library of some derelict nature. The limited set pieces are like points in a connect-the-dot puzzle, the audiences’ imaginations drawing the connective lines between each piece. There is a particularly striking visual moment during one of the storm sequences where the lighting on the stage has washed away into a darkness that swells with the oncoming soundscape of the maelstrom and Bethel rocks back and forth on a ladder. The seeds of imagination are planted and these little enhancements have a full sized ship pitching and yawing in the waves of the tempest in the mind’s eye as Bethel surges onward in the tale.

The Sound Design is a unique hybrid of effects and Grecian music that augments many of the scenes as they pass. Some of the more disturbing moments that occur throughout the production are enhanced tenfold because of these intricately plotted sound effects. The Island of the Cyclopes comes immediately to mind. Bethel makes a few of his own sound effects as well, and natural scenic destruction adds to the mixture of aural oddities and pleasures experienced along the journey.

To summarize the story here would do a great disservice to both Homer and Bethel’s work. Bethel’s performance ends up reading like an over-engaging and enthusiastic historical lecture. If more collegiate lectures were delivered in this fashion, ancient history would be far more interactive and engaging. Making difficult decisions throughout the performance of what to edit, what to truncate and what to expound upon, Bethel finds the perfect blend of the old literary device “show verses tell” wherein he delivers equal parts of the action through narrative and through engaging these characters as entities that he becomes.

Bethel has indefatigable energy that is boundless from start to finish. Racing through this classic in a fashion that feels suitable so as not to seem too time tasking upon the audience, he delivers scene after scene of events and characters without ever giving the audience pause. The constant momentum and pace helps pull the rewarding ending of the story across the finish-line in a way that really gratifies the audience after their journey of watching the show.

Bethel is an honest performer; joking with the audience and toeing the line of fourth-wall obliteration just enough to keep you intrigued as the story wends itself across the wine-dark ocean and through the myriad of obstacles and oddities that await the protagonist. Taking on the character of Odysseus himself, Bethel makes a minimal effort to separate his voice from that of his own narrative voice. The deep-felt symbolism in this choice is profound; the narrator and by proxy the actor are the man on the journey and in a sense are Odysseus.

Handling the comedy with superb delivery and timing, Bethel also understands emotional levity and trauma. Though there is far less of the latter featured in Bethel’s adaptation, what’s present is heartfelt and delivered with an immense understanding of the gravity of the situation. Bethel’s overall performance is much a kin to a seasoned Renaissance Minstrel wandering from town to town to tell his tale to all who will listen.

Truly you must come here (even if you do come by your feet) to experience The Odyssey unlike any experience you’ve ever had with it before. There is something richly rewarding about facing down this epic tale through the eyes of one man.