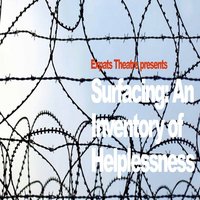 One of the newest companies to grace the DC Theatre Scene— ExPats Theatre, founded by Karin Rosnizeck— is getting their footing under them after a performance at the Capital Fringe Festival this past summer. With an extended version of their production of Surfacing: An Inventory of Helplessness, ExPats Theatre sets up shop in The Atlas Performing Arts Center— in Theatre Lab I— for a weeks to test the waters. The piece, written by Austrian playwright Julya Rabinowich and translated into English by Karin Rosnizeck, has a broad-strokes focus of lives of the trapped, in the case an underground refugee, a kidnapping victim, and a self-imprisoned individual who finds himself isolated due to vengeance-related death threats. Directed by Karin Rosnizeck, the piece is more of an exploratory movement-based performance experience and at times feels rather disorienting.

There is perhaps something to be said for the translation; it appears that some of the text may get lost in translation. What the audience is presented with are shattered fragments of narrative, mere snippets of story that never quite come together, never really gel with one another or the other production elements of the piece, and ultimately create confusion among the viewer. If this is both playwright Julya Rabinowich and Director Karin Rosnizeck’s intention— to generate an unstable sense of chaos, clutter, and confusion (mirroring the experience of being a refugee, a kidnapping victim, and a house-arrestee from vengeance-related violent circumstances)— then they’ve done so exceptionally well. Regrettably, this doesn’t always feel intentional.

Components of the production are strong. There is striking and visceral sound design, crafted by Johnny Dahm Robertson, as well as effusive and startling lighting design conceptualized by Ian Claar. And there are breathtaking moments where the sound and light collide into these stirring sensations that feel unsettling or emotionally charged. But mostly Robertson’s sound design is overwhelming and feels oddly displaced against a lot of what is happening.

Another strong, singular element of the performance is its choreography. Surfacing: An Inventory of Helplessness is more of a movement-based experimental exploration than it is a play or performance. Choreographer Erica Rebollar encourages each of the three performers— Nichole Chimere, Christine Jacobs, Greg Ongao— to discover their bodies in spatially tangential ways as their presence relates to the floor, their scenic props, and to the light and sound being projected into the room. Rebollar relies heavily on gesture-driven, albeit interpretive, repetition and often the dancing and dance-based movements possess a frenetic, perpetual urgency, which drives each of the performers forward into a sort of maddened frenzy. Again, the dancing itself is unique and impressive and loaded with physical interpretation, but feels somehow disconnected from the whole of the performance experience.

The same is true for the Julya Rabinowich’s translated text. The audience is never given the breadth of depth of detail one might expect to receive of these three character’s stories. There isn’t even really a narrative. The notion of “waves” (both physical ones, emotional ones, and the cyclical crashing nature of these turbulent emotional experiences) permeates the experience, but again does not serve as the connective tissue for the show. There are broken sentences, jarring statements, little to no context— even with the preemptive voiceovers during the pre-show and at the start of each actor’s main introduction to the space. The movement-based work is intriguing but lacks narrative focus and inclusion, which makes an emotional takeaway from the piece difficult.

Nichole Chimere, Christine Jacobs, and Greg Ongao are present in their moments; the trio have vastly intriguing dance-based explorations. Their performance experience may have been better served with either a full inclusion of a narrative or a complete erasure of the text. For as edgy and off-kilter as this piece currently is, one wonders if it might have been better served as a textless dance piece, where the brilliant sound design of Johnny Dahm Robertson could radiate all throughout the performance as the trio discovered their own internal narratives through movement.

It’s an intriguing piece upon which to found a company; all of the varying elements of what potentially could be a very successful show are present, they just lack continuity, cohesiveness, and a general sense of inclusion. There is little sprinkles of minutia but the bigger picture of Surfacing: An Inventory of Helplessness remains shrouded and unclear. That is not to say the work isn’t worth investigating. The cast and production team are currently serving as theatrical incubators for what could potentially be extraordinary performance-based theatre as they continue to cultivate their own path with ExPats Theatre.

Surfacing: An Inventory of Helplessnessplays through September 29, 2019 with ExPats Theatre in Theatre Lab I of The Atlas Performing Arts Center— 1333 H Street NE in Washington DC. Tickets are available by calling the box office at 202-399-7993 or by purchasing them online.

The Way Out at Quarry Theatre
Close