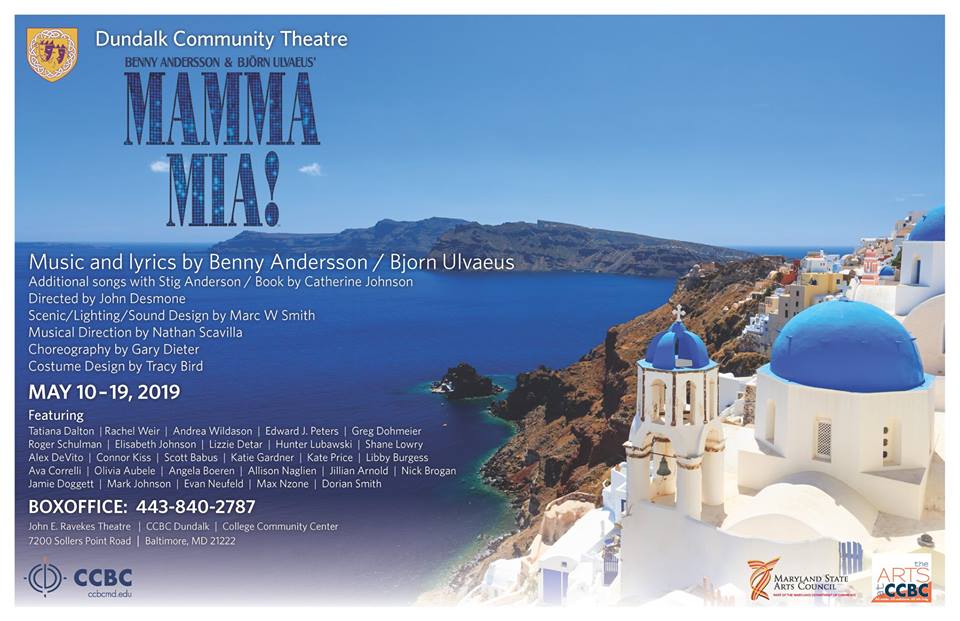 “My, my… how can I resist ya!”—Dundalk Community Theatre ends their superb season with a vibrant and visually stunning presentation of Mamma Mia! “the smash hit musical featuring the songs of ABBA!” With Direction by John Desmone, Music Direction by Nathan Scavilla, and Choreography by Gary Dieter, this show is sure to leave you singing & dancing your way out of the theatre!

I must start by saying that this production of Mamma Mia! is so well-done in terms of technical elements (set, costume, and light design) that, many times, I found myself forgetting I was taking in a community theatre show. This level of artistry is what all local companies should be striving for and from the first reveal of the brilliantly-designed rolling set to the dazzling costumes featured in the Finale, my jaw remained agape. Set design by Marc W. Smith was truly magnificent and put us right in the middle of summer holiday on a Greek island. There was such an attention to detail that took this to the next level down to the water marks on the outdoor facades and the vibrant blue and white Grecian color scheme. While movement of the set pieces occasionally lagged creating scene changes that were a few beats too long, as soon as the lights came up I forgot all about the previous thirty seconds and was right back in the story.

And speaking of lights [also by Marc W. Smith], I was so impressed at the ability of the design to not only illuminate the stage when- and where-needed but to truly highlight the mood of a song or scene in certain moments. They complemented the actors work and the set design perfectly and took production quality from better to best. Bravo! Costumes by Tracy Bird were, simply put, stunning. The pieces were perfectly fit to the performers, appropriately elevating the look from pedestrian to theatrical; it’s such a fine line, and Ms. Bird has stuck the landing brilliantly. My favorite pieces were the iconic jumpsuits worn by Donna and the Dynamos, vibrant, shimmering, and touched with some really specific finishes, as well as the wardrobes worn by Tanya and Sophie. Again, attention-to-detail wins the day; this designer understands this show, what it needs to succeed, and does so with flying colors. Incredible!

Moving to the action onstage, Choreography by Gary Dieter is extremely well-executed and clearly planned to a tee for most of Mamma Mia! Because of this, there were one or two moments where I craved just a touch more freedom for the dancers, though on the other hand, this precision was often to the benefit of the well-paced numbers. The stage pictures Dieter creates, especially during the songs “Money, Money, Money” “Under Attack,” and the Act One Finale numbers are nothing short of breathtaking and add perfectly to the picturesque nature of this production. My favorite choreo, as odd as it might sound, comes during the front half of “Lay All Your Love” in the movement work between Sky and Sophie. I have never seen that number handled so well onstage and it created a chemistry and tension I’ve never seen in those characters. Also of particular note is the zippy and dynamic finale, tying the show up with a beautiful bow and sending you out of the theatre feeling exuberant and energized. Fabulous work!

And driving those musical numbers with know-how is Music Director and Pit Conductor Nathan Scavilla. Assembling a group of skilled musicians is not always an easy feat, but Scavilla being an experienced band leader finds just the right people for the job. A major success factor for any musical comes from proper tempos and the right blend of instrumentation and vocals, and with the help of Sound Designer Marc W. Smith, Scavilla strikes a lovely chord. The harmonies across the cast are tight and well-rehearsed. The band creates a sound that complements the vocals through the course of the night while still getting their chance to appropriately rock out: an absolute must for the ABBA songbook. Thank you for the music, Nathan!

Director John Desmone leads the group here with a clear and precise vision that speaks to both his directorial experience and his clever creativity. The actors do occasionally fall victim to the book and its myriad of faults, but for the most part, they and Desmone have added in so much smart visual comedy that it often has that ability to transcend the text. These funny bits keep the story as fresh as possible and that is what really makes the difference in this production. Occasional pacing issues aside (it was opening night after all), these moments work to create richer depth and heightened comedy for these characters—a necessary touch indeed. Desmone & his team also must be commended for assembling an immensely talented & notably attractive cast. Every person really looks the part and performs with a clear concept of the characters, adding to the professional polish of this show.

Which brings us to the performers themselves—there is no shortage of talent and energy in this group. The ensemble of this piece, as a core, exhibit their skill in the realms of dancing and singing with charisma and precision. They work together to provide a solid musical and structural foundation for most song-and-dance numbers and are a sight to behold when they simultaneously hit their marks. They work very well not to ever upstage, but rather support, one another and it pays off. Playing Sky’s best men, Alex DeVito as Pepper and Connor Kiss as Eddie provide well-executed comedy. Pepper’s moments with Tanya are of particular note as he tries to pull out all the stops to woo her, sadly and comically to no avail. DeVito makes Pepper an absolute hoot to watch from his first appearance to final moments, also showing off his adept dancing skills. As Sophie’s bridesmaids, Hunter Lubawski as Lisa and Lizzie Deter as Ali start the show off on a high note with their “Honey, Honey” alongside Sophie and create sweet and memorable best friend characters.

Mamma Mia! would be nothing without the Papas! Edward J. Peters as Sam, Roger Schulman as Bill, and Greg Dohmeier as Harry all excel vocally and bring their own special spins to these roles. Dohmeier plays Harry simply but to great effect. His rendition of “Our Last Summer” with Donna sounds lovely and shows us the relationship they had as friends without being too saccharin—not an easy feat. As Bill, Schulman brings a sweetness and depth to his role that we don’t always see from the character. He plays it with an openness and vulnerability that is refreshing, especially during Sophie’s number “The Name of the Game” and following scene as well as during his interactions with Rosie. And playing the role of Sam, Peters brings out a slightly wry sense of humor, while still showing the character’s more passionate side, which in balance works really well here. He also serves as one of the vocal standouts in the show. His “Knowing Me, Knowing You” is delivered beautifully and with a great deal of honesty & technical skill and “SOS” alongside Donna offers the perfect blend of power and heart that is required in that number. Great work, Dads!

The Dynamos are dynamite and they’re back for one night only! Andrea Wildason as Rosie serves up the funny, throwing out zinger after zinger throughout the show. She gives us a very naturally comedic performance while still interacting lovingly with her co-stars. At times her presence onstage felt almost a bit too casual, but she usually found her way back through the text to playing Rosie with the theatrical flair necessary. Her best moments come during “Dancing Queen” when she gets to have some retro fun and play up the aging performer shtick to great effect. And as the other half of the Dynamos goes, Rachel Weir as Tanya is sheer perfection. Weir has created a character so believable, you might swear she just walked off the set of The Real Housewives. From the minute she slinks onstage, she captivates and nails every single comedic bit with bitingly sarcastic aplomb, still managing to make this character loveable. Her interactions with Wildason and DeVito are truly priceless and “Does Your Mother Know” gives her a moment to also show off her prowess in the areas of song and dance. Well-dressed, well-studied, and well-staged, Weir has created a Tanya not to be forgotten!

We can’t do a wedding without the bride and groom, and Shane Lowry as Sky and Elisabeth Johnson as Sophie are a match made in Heaven. Mr. Lowry gives us hands-down the best acting in the show in terms of scene-partnership and believability. He hits just the right notes in his musical moments, both vocally and emotionally, and makes Sky’s more serious material, which can oftentimes come off as melodramatic and even curt, accessible and relatable. He is having a ball onstage and it shows, especially in his moments alongside Ms. Johnson. Their chemistry is palpable and comes to the forefront in all its glory during “Lay All Your Love.” Lowry has taken the time to fully flesh out a human being while still filling the position of the handsome young romantic lead in musical comedy… surely a triumph. And Elisabeth Johnson plays Sophie transcendently. She is a gifted actress & singer with a clear understanding of her character and how to play her accurately. Watching Johnson almost feels like watching a performer from another time; her acting style makes the 1999 setting of this play feel real somehow and helps the audience connect with that time period. She also has a superb voice and exhibits her dulcet tones with excellence from beginning to end. A performance not to miss!

And finally, as the “Mamma” Donna Sheridan herself, Tatiana Dalton shines. This role is no easy task vocally, and Ms. Dalton glides her way through song after song with ease and style. Her finest moment definitely comes in the bittersweet & sentimental “Slipping Through My Fingers.” In this number she has the opportunity to show off both her smooth voice and her adept acting chops. She is a fantastic performer with an understanding of how to relate to others onstage, and throughout the entire show, exhibits the many sides of her character with skill. Carrying the audience through with her on the journey, Dalton ultimately delivers Donna to a happy ending perfectly befitting any great musical comedy. “The winner takes it all,” and Ms. Dalton along with the rest of this incredible cast cross the finish line triumphantly.

Mamma Mia! plays through May 19, 2019 with Dundalk Community Theatre at CCBC Dundalk in the John E. Ravekes Theatre— 7200 Sollers Point Rd. in Baltimore, MD. For tickets call the box office at (410) 285-9667 or purchase them online

Mamma Mia at The Hippodrome
Close