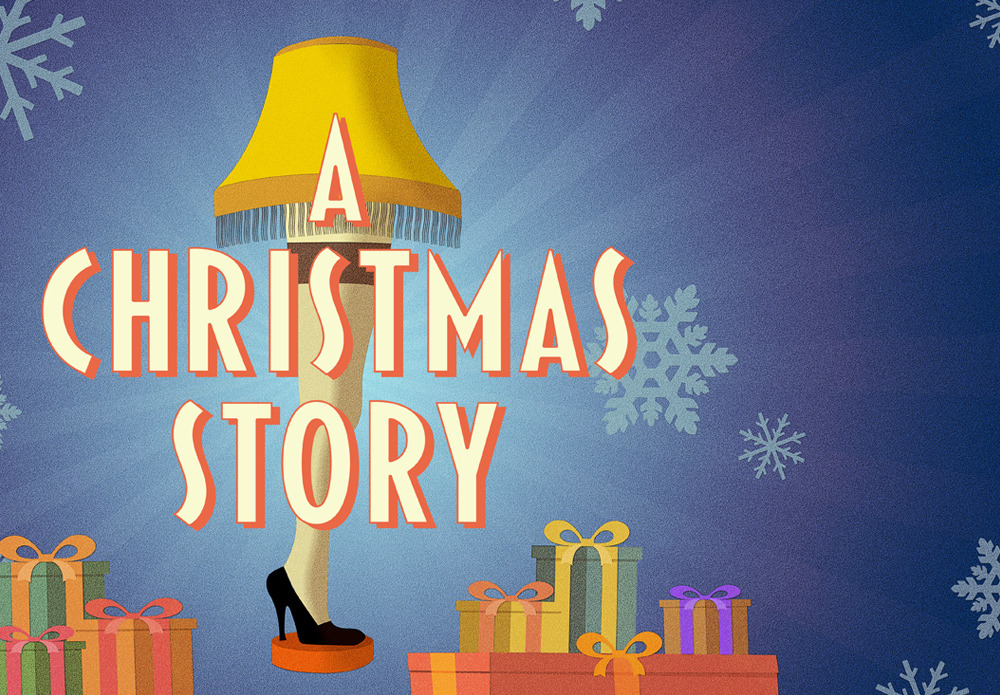 You’ll shoot your eye out! You’ll shoot your eye out! You’ll shoot your eye out when you hear just how many different theatres are all doing A Christmas Story this Christmas season!! BUT— fear not! St. Gabriel Miracle Players are the first AND they are the only ones to be doing the non-musical version! So you won’t find any leg-lamp kick-lines at St. Gabriel’s this November, but you will find a talented bunch of youngsters and youngsters at heart doing their seasonal magic on the Miracle Players’ stage to bring you that timeless— since 1983— tale of little Ralphie, his desperate yen for an Official Red Ryder Carbine-Action Two-Hundred-Shot Range Model Air Rifle with a compass in the stock and this thing that tells time, the Old Man’s Major Award, and of course those blasted Bumpus Hounds! Directed by Heidi Toll, this jolly old Christmas fable is one for the entire family— and St. Gabriel’s will even do you a turn better by serving up dinner before the show!

The one place where the show could use a bit of improvement is its scenic changes. This might have a little something to do with the Director being the one-woman run crew who is also doubling up as the stage manager, but regardless, the scenes linger a bit too long in darkness while some of the heavier and bulkier set pieces get switched around. This aside (and the attempt at interweaving a few musical underscorings that missed the mark just a bit and were fewer than anticipated) there is a lot of fun happening on the stage. Everyone’s favorite lines and scenes from the film are right there live before your eyes, and The St. Gabriel Miracle Players can guarantee that it’s a dog-gruffin’, mothball-flipping, dig of a good time, to potentially quote the Old Man, of course.

Toll, who clearly isn’t wearing enough hats the run crew, Stage Manager, and Director, also assists Sharon Zelefsky with the costumes for the show. All things considered they look pretty swell, taking everyone in the audience on a quick trip down memory lane, circa 1943 in Hohman, Indiana. The costumes aren’t insanely iconic the way certain holiday movies are, though where it counts— like Ralphie’s infamous deranged Easter pajamas and Randy’s “coat where he can’t put his arms down”— are on point and draw the audience back to their fond memories of the film.

Despite the hiccups and bumps along the way, which included a last minute major cast replacement, the show was heartwarming and endearing. With adorable little girls— Mayah Lohrmann and Elinor Bower playing the scientifically superior Helen Weathers and the sweeter than mom’s apple pie Esther Jane, respectively— the cast is chock full of that simpler time to which we all wish we could return. The company even finds little ways to sneak real youngsters into the production, making Ava Cantwell and Lily Haney a part of Black Bart’s nefarious crew when he shows up in one of Ralphie’s Red Ryde BB-Gun fantasy sequences. Tommy Peisinger plays the baddie ‘Black Bart’ but gets much more time to make a nasty character out of the show’s big bully Scut Farkus. With that killer attitude in place, every time he races after the boys it becomes a thrilling and slightly scary moment.

Those aforementioned boys, Flick (Natalie Haney) and Schwartz (Therese DeMarco) do a fine job of being the schoolyard companions for Ralphie and the bully-bait for Scut Farkus all throughout the show. Haney and DeMarco do an exceptional job of cross-dressing their parts, why unless you knew them (or looked in your program before the show got underway) you’d never know they were girls playing boys! With DeMarco dropping her voice down to create a convincing male character, she gives Schwartz that extra edge needed when they’re seen together outside of the school house getting up to all sorts of school-boy behaviors. Haney has the whine of Flick’s character refined down to a science and the whole “flagpole-triple-dog-dare-tongue” scene is hysterical; you’ll die laughing over their antics, especially when it comes to poor Flick’s fate.

The man wearing many hats in the production, which he cleverly displays physically stacked atop one another during curtain call, is Nate Lohrmann. Playing the Delivery Man, the Canadian Christmas Tree Lot Owner, Santa Claus, and Red Ryder himself, the cowboy extraordinaire, Lohrmann finds clever little ways to distinguish each of his characters from his others. He walks tall and with pride as Red Ryder, he’s a brief blip of a cameo as the delivery guy, and his Santa Claus is quite convincing, but it’s his fabulously o’er-laid Canadian accent that makes the Christmas Tree Lot Owner character a real scream. Matching Lohrmann’s scene-stealing antics is newcomer Molly Laska playing Miss Shields*, Ralphie’s Teacher. While Laska is no stage first-timer, this performance in A Christmas Story marks her first production in the Baltimore area. Laska infuses a larger than life energy into Miss Shields, particularly during the “best theme ever” fantasy that Ralphie has, which is so comical you can’t help but squeal with delight.

Little Randy (Ben Fregeau) is too cute for words. He really only says “I gotta go wee-wee” and “Santa! Santa!” but that’s all you need with a kid that has that much gumption and gusto! Fregeau really has what it takes to make those repeated lines the prize of the audiences’ eye and when he gets stuck in his coat, when he pops up from behind the couch, and when he starts crying about various and sundry, it’s just the most precious thing on the stage. Mother (Terri DePaolo) and The Old Man (Paul Ballard) are quite the pair in addition to their youngest son Randy. DePaolo has that aloof nurturing nature about her that everyone remembers from the mother in the movie while Ballard has his streaming strains of profanity nuanced out like a fine art. And when Ballard gets going about the turkey? It’s hilarious.

Finn Smith is a fine Ralphie Parker. He’s cheeky, well-grounded in the scenes, and matches to utter perfection the mouth-movements whenever his character is ‘speaking’ in scene but you’re hearing Ralph as an adult narrating what’s happening. His facial expressions are priceless and the way he engages in the fantasy scenes (take your pick, between the Black Bart bad guys scene and the Life-Boy-Soap Blinding scene, there’s a barrel of laughs in each) is really something that harkens back to the way the film handles those dream-like moments.

Gene Valendo delivered an impressive performance considering he was a last minute addition to the cast, being brought in to replace an ill actor in the leading role of Ralph Parker as an adult, also known as the show’s principal narrator. Sitting outside the scenes with book in hand (and let’s be honest, that’s a cute way to frame it up even if the actor didn’t need the script just for reference…the reading of an old family Christmas tale is charming and who wouldn’t buy into it if the narrator had a book in his lap?), Valendo is a vivacious and lively narrative force that guides the on-stage scenes to life with his engaging voice and animated facial expressions. There are times that Valendo’s narration was so animated he looked ready to leap from his chair, directly into the scene and transform into young Ralphie to actively relive the moment himself! And it was quite remarkable just how in sync he and young Finn Smith were when it came to those shared narrative moments.

Don’t tell Santa you want a football. Don’t even tell him you want the Official Red Ryder Carbine-Action Two-Hundred-Shot Range Model Air Rifle with a compass in the stock and this thing that tells time! Because you’ll shoot your eye out! Tell him you want tickets to see A Christmas Story at St. Gabriel Miracle Players this Thanksgiving season. And if you’re real lucky, he’ll gift you that present early!!

A Christmas Story plays through November 18, 2018 at The Saint Gabriel Miracle Players— 6946 Dogwood Road in Baltimore, MD. Tickets can be purchased at the door, by calling Dan Conley at (410) 747-5626 or by purchasing them online.