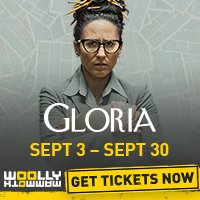 Adam Grant wrote, “The culture of a workplace – an organization’s values, norms and practices – has a huge impact on our happiness and success.” Never has this been truer than in Branden Jacobs-Jenkins’ Gloria, Directed by Kip Fagan at the Woolly Mammoth Theatre Company.

Fagan has a clear understanding of Jacob-Jenkins’ work, and his staging is brilliant. Life, especially in the work place, is full of ups and downs, twists and turns. As if riding this emotional roller coaster that is Gloria wasn’t enough, Fagan tickles your funny bone, or slaps your face, or sometimes even gut punches you around every corner. It’s as if he grew up in a home that was half fun house and half haunted house, and he brings his childhood to the stage. Sometimes what playwrights means to convey to their readers is left on the production room floor to be swept away. Kip Fagan has embraced Gloria as it is written and elevated it from page to stage in a way that is believable, expressive, and amazing. As soon as the set went dark, right before intermission, the gentleman seated next to me jumped to his feet (I suspect to see if he had left a puddle) and shouted to me, “What in the f*^k just happened?” Well played Mr. Fagan. Well played indeed, sir.

Award winning Set Designer Misha Kachman delivers once again. The transformation from office to coffee shop is quick and beautifully designed. The attention to detail brings everything together. From the frosted glass to the menus on the wall, you feel as though you are sitting in both locations. Kachman’s use of space is second to none. Watch how quickly the copy room becomes a coffee house.

Colin Bills, Lighting Designer, and Sound Designer Tosin Olufolabi don’t spend time in anyone’s shadow. Bills sets the tone with perfectly placed specials, and a mood setting cornucopia of color. The use of what appeared to be fluorescent lighting brought realism to the office setting. From the time you enter the theatre to the final track, Olufolabi’s musical selections grab your attention, shake you, and warn you to buckle up because it’s going to be one hell of a ride. Again, attention to detail plays big here. For example, whenever the coffee house door is opened you can hear the city come alive. Bills’ lighting again is huge here as he demonstrates the ability to draw your eyes where they need to be but allowing you to take in the hidden gems like the street.

I have known fashion gurus, well at least those who know much more than me, who could look at a person tell what “season” they are and dress them accordingly. Costume Designer Kelsey Hunt consulted her cerebral palette as she clothed the pretentious, the self-centered, the weird, the anxious, the stressed, the self-absorbed, and the girl next door; and she does it as though Sigmund Freud were Rachel Zoe. She has an amazing ability to match the garb with the id.

Ahmad Kamal (Lorin) is the one person in the production that plays the same character throughout the show. He is an audience favorite because he is, or at least we’d like to think he is, us. Kamal delivers a heartwarming performance and teaches us that no matter our circumstances, we should not lose faith in the goodness of our fellow man. He made me think that just maybe the show should have been called Lorin.

Alyssa Wilmoth Keegan (Gloria/Nan) plays the title role in act one and does it so well that you kind of feel a little uncomfortable. He monotone delivery and look-through-you stare answer the question, “I wonder what ever happened to that girl that always ate lunch alone?”, and yet she makes you feel for her. There is a part of you that just wants to hug her, but the other part is saying, “Run!” Whatever sympathetic feelings you may have had for Keegan in act one will quickly disappear in act two. Here we finally see Nan and the more she speaks the more you’ll have to fight your urge to slap her. Keegan gives us a wonderful performance of two contrasting characters.

Eunice Hong (Kendra/Jenna) is that person we wish we could all be in the work place. She arrives when she wants and speaks her mind freely. Of the six cast members Hong owned the stage. She understands how to mix comedy with drama and does it flawlessly. Hong has moments where she really shines like in her monologue about how the old guard isn’t dying off fast enough, and when she allows us to see the human side of Kendra in act two. Yet there are times that her delivery is too fast, and some lines get lost. The biggest disappointment for me was, unlike the rest of the cast, she played both of her roles the same way. It was very confusing during the LA transition.

That guy that just skated by in high school and college is exceptionally played by Conrad Schott (Dean/Devin). You know the one. The guy who never played by the rules because there was always someone there to bail him out. Schott shows a guy who finally realizes that he wants more out of life but isn’t sure if it is too late. Up to this point he has had no plan and Kendra makes it clear that he has gone about as far as he is going to go. Much like Hong, Schott’s character undergoes a change from act one to act two. Circumstances force him to rethink his life and Schott shows that growth in his character. He also makes it perfectly clear when he transitions to Devin. If you’ve ever dealt with IT, you know Devin.

Justin Weaks (Miles/Shawn/Rashaad) is as cool as a dog’s nose in a wire muzzle. Weaks transitions smoothly from the quiet yet calculating Miles, to the hip barista Shawn, to the flashy Rashaad. He had the least amount of lines of all the actors, but you won’t forget him. What he does say he says with authority, crispness, and style. Another actor with great stage presence. Where the script cut him short in speaking, he makes up for in his body language and facial expressions. I can’t wait to see him in Woolly Mammoth’s upcoming BLKS, and Describe the Night.

For me, the show could have gone on for another hour if it meant we got more of Megan Graves (Ani/Sasha/Callie). Graves brings to life three different characters and gives a performance of each that will make you question if you are watching Gloria or a staging of Flora Schreiber’s Sybil. Unlike most of the cast whose characters we either don’t see or have some major change to their physical appearance or costuming, Graves remains pretty much the same. She relies solely on her talent as an actor and oh what a talent it is.  Callie is stand offish and disinterested until she finds out a tidbit of information from a guy who just wants to be friendly. This is in total contrast to the smart, bookish, nerdy Ani that is the office person that everyone just loves. The passion that Graves gives us as Ani makes it very hard to hold back a tear. In between the two is the doting, butt-kissing, trouble maker that is Sasha. Pay attention to how she manipulates Nan, a characteristic not shown by Ani or Callie. Overall, Megan Graves gives a performance that is not to be missed.

Note to the folks at Woolly Mammoth: This was my first experience at WM. The box office staff and ushers were so polite and welcoming. The countdown and follow up emails, including the survey, were a nice touch and really made me feel that WM cares about their patrons. It was disappointing that the actors and tech crew were not available after the show. Thank you for a wonderful evening.

Nothing To Lose (But Our Chains) at Woolly Mammoth Theatre Company