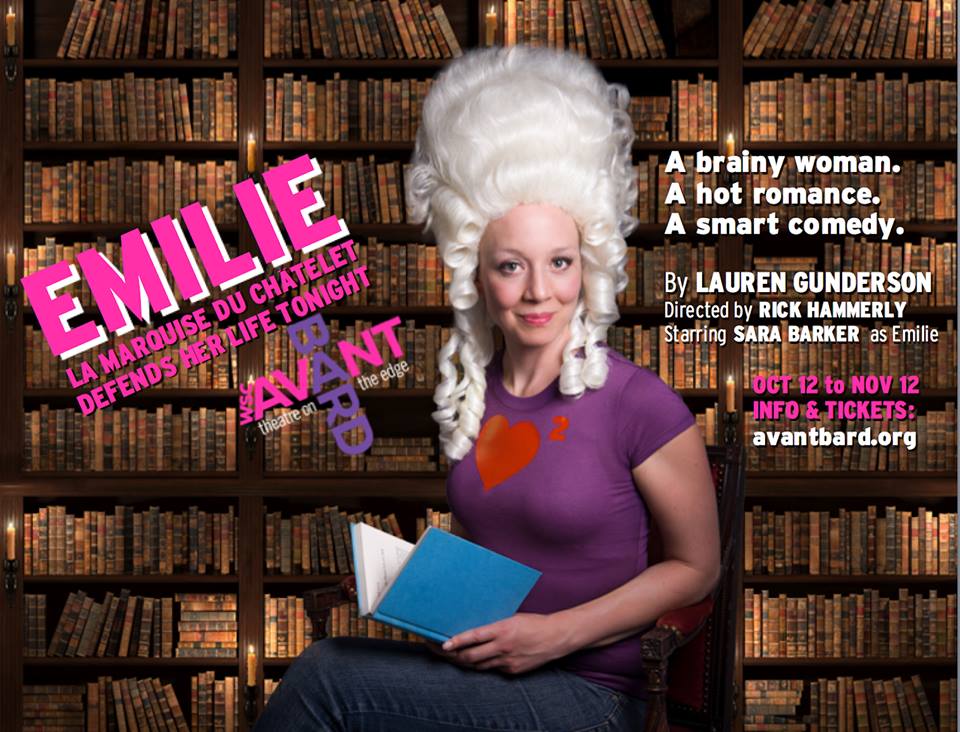 A life lived fully can still change the universe. Surely that must mean your life has meaning, if it’s changing the universe. Of course, it’s not what we mean but that we mean. And your life too can mean something if you live it fully by going to see the area premier of Lauren Gunderson’s Emilie La Marquise Du Châtelet Defends Her Life Tonight currently playing at Avant Bard. Directed by Rick Hammerly, this hot romantic comedy gives a conflagration of meaning to the smart woman who predates Einstein. Zippy, witty, poignant, and passionate, this production is one for the books when it comes to proudly putting the female forward in the limelight not only for all that makes her woman but for her brains, compassion, and overall existence as a human being too.

Director Rick Hammerly ensures that the audience will be sufficiently captivated and well cared for over the course of the two hours’ stage traffic. Utilizing Movement Coach Elena Day to choreograph the movement of the five-person ensemble creates a fluidity to the piece that establishes a balance between the present reality of the hereafter, which is where the play starts, and the lively recollection of 18th Century France, wherein Emilie’s life occurred. There is a weight loaded into the performers’ movement; Day’s choreographic approach to the piece moves forward like the gears of a clock, pushing time through because it is ceaseless and waits for no person, not even Emilie.

Teaming up with Sound Designer Frank DiSalvo Jr., Hammerly’s approach to playwright Lauren Gunderson’s scintillatingly brilliant script becomes electrifying, quite literally. DiSalvo augments those striking moments of ‘shut-down’— wherein the reality of the replay of her life comes short-circuting to a halt every time the active entity of Emilie physically touches another from her past— with an intense sound scape. This couples with Lighting Designer Joseph R. Walls’ illuminating tactics and together these moments are shocking and breathtaking. DiSalvo is responsible for a great deal of aural stimulation throughout the performance as well; the soundscape which he concocts for each scene and each shift between scenes is profound, matching the sentiment of Emilie and her nostalgic experience of life.

Set and Properties Designer Greg Stevens works with Costume Designer Danielle Preston to create a skeletal framework of an imaginary world. Everything is on wheels when it comes to Stevens’ set, whilst most of Preston’s costumes hang unseen off of the back of the seating banks, allowing for quick changes. Both Stevens and Preston’s approach to their design elements are subtle, contemporarily minimalistic whilst simultaneously capturing the essence of 18th Century France. There is a cleanliness to both of their creations, though not a sterility, one which enhances the effect of the piece’s ensemble nature without pulling too much focus from the performances at hand.

This quintet of performers move as if at times they were one seamless entity. This falls sharply in line with the premise of memory that Playwright Lauren Gunderson has set forth. Gunderson’s work is sharp; there is a smartness and a cleverness to the way she exposes the life experience of Emilie La Marquise Du Châtelet without sheltering the unpleasant bits, even when the character herself wishes to avoid them. Gunderson, proving to be a master at cheeky repartee— particularly when it comes to the rapid-fire banter often throttled and vigorously volleyed between Emilie and Voltaire— produces a masterful piece of theatrical bliss; this is not just an ordinary romantic play with comedic elements, or a humorous waltz down an obscure memory lane. Gunderson has a unique and unmistakably intelligent voice and has provided a clear window into the meaning of such a historical figure, giving her voice, wings, and tenacity to overcome what the times would have made of her then.

Though often in the performance the quintet move through the same electrifying current, each performer brings something striking and uniquely their own to the production. For Steve Lebens, playing the husband to Emilie— among others— it is actually his comedic and poignant, albeit brief, portrayal of Newton. With vivacious facial expressions that defy description, he draws hearty laughter from the audience every time Newton is called upon, or thinks he’s called upon, to enter the scene. This is a sharp contrast to the more somber and solemn character of Emilie’s husband, which Lebens undertakes with great reverence and care.

Lisa Hodsoll, like Lebens, takes on various characters though it is that of Madame, for which she is credited. A more curious and fascinating character, though equally as brief in appearance as Lebens’ Newton, is the role of Emilie’s mother.  As Emilie’s mother there is a reserved austerity about her portrayal, almost an arrogance reserved for that age-old notion of “Mother Knows Best.” Hodsoll, who is expedient in her quick costume changes and physicality adjustments, keeps all of the characters separate from one another with a minimal effort. The Madame, is somewhat of a comic plug, existing to break some of the spiking tension that is rupturing at its peak between Voltaire and Emilie at that point in the play.

The curious character of Soubrette, as played by Billie Krishawn, creates a sense of wonderment in the production. Literally, the word is a descriptor for an actress or other female performer playing a lively, flirtatious role in a play or an opera. Gunderson uses this notion of soubrette to expose the sensually seductive and wildly alluring feminine wiles of Emilie because Krishawn’s character becomes Emilie in memory, stepping in to intercede (with a magical and almost dreamlike tinkling of bells and chimes, compliments of Frank DiSalvo Jr.) whenever real stuck-in-the-hereafter Emilie almost touches someone from her memory. There is a powerful reckoning behind Krishawn’s portrayal of Emilie in these moments, as well as when she plays Emilie’s daughter.

Indescribably passion, intolerable tantrums, ridiculous levels of melodramatic exuberance, all of these things are capture to levels of near flawless perfection in Brit Herring’s portrayal of Voltaire. Channeling prepubescent immaturity for Voltaire’s sulking fits and moody tantrums, Herring achieves a comedic level of intrigue without feeling disingenuous or manufacturing farcical artifice to do so. Delving headlong into the rich and hearty arguments that Gunderson pens between Voltaire and Emilie, Herring is unafraid to bring his A-game to the table, delivering a robust and vigorous foil to the titular character. There are moments of volatile chemistry between the pair, moments of earnest genuine compassion as well, all of which stem from a solid understanding of the character on Herring’s behalf as well as the exquisite performance that Sara Barker gives as Emilie.

Speaking with raw and earnest truths even when Emilie’s emotions confuse the character, Sara Barker earns the titular responsibility of the show with a superior performance, doing Gunderson’s words, themes, and overall plot structure a generous justice. For as much as Barker parlays to the audience through spoken word— oft accompanied by frantic gesture and or pacing— there are equal parts emotion and thought expressed to the audience in her silent facial expressions. When looking through the panes of glass on herself (as played by the Soubrette) or glancing across the space at one of the other characters whose presence majorly impacted her life, Barker brings volumes of her character’s inner monologue directly to the surface before she ever utters a word. There is a remarkable brilliance in her portrayal, everything from the way she rediscovers these moments, to the way she lives the epiphany of new discovery by the show’s conclusion. Sara Barker defends her acting chops in his performance and arises triumphant as Emilie.

Safety bores us. And that’s sad. Be neither bored nor sad and take a chance on this area premier at Avant Bard; it is an assured promise that there is great meaning to be uncovered in Emilie La Marquise Du Châtelet Defends Her Life Tonight.

Inside the Closet, Inside the Mind: An interview with Factory449’s Sara Barker and David Lamont Wilson