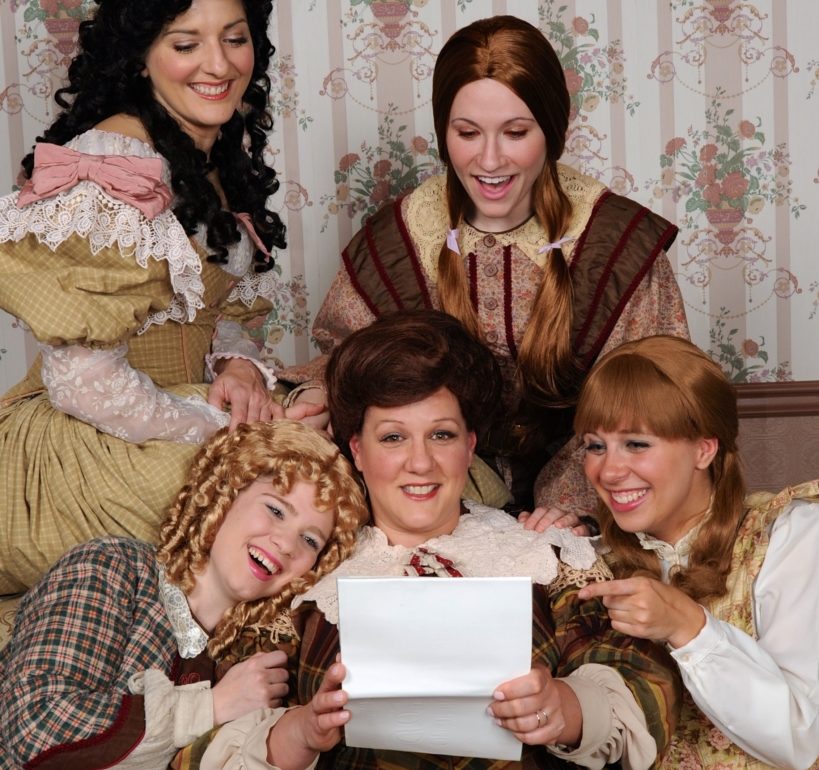 Astonishing! It’s astonishing how sometimes when you dream your dreams come true in extraordinary ways. And Charm City was dreaming of a musical that would awaken the soul for springtime. Dreams are coming true with Dundalk Community Theatre’s production of Little Women. A remarkably performed, sensationally sung, and overall impressively handled musical Directed and Choreographed by Tom Wyatt with Musical Direction by Nathan Scavilla, this riveting story, based on the novel by Louisa May Alcott, takes on a life all its own once live upon the stage and fulfills your every dream of wishes and wonder when it comes to the ‘little women’ of the March Family.

Wearing the three-pointed hat of Scenic, Sound, and Lighting Designer, Marc W. Smith sets an appropriately fantastical aesthetic to this literary classic turned rogue stage musical. Smith’s work with both Sound and Lighting design fully embrace the emotional structure and well-laid pacing of the production, particularly when it comes to moments of tightly focused spotlights on Jo and warm amber glows for the midday sun in the beach scene. Smith’s work as a scenic designer is striking and praiseworthy not only for the myriad of scenic shifts, which are timed with exacting precision to keep the show rolling along, but the intrinsic beauty of each carefully crafted scene. Full picturesque backdrops for the snowy New England grounds and the beach scene create an exciting contrast against the attic framework and various furnishings that populate the March home. Not overly complex but detailed enough to look realistic, Smith’s scenic design transports the audience to the reality of Alcott’s novel with imaginative tendencies.

The costumes, procured from A.T. Jones & Sons, have been wrangled and arranged by Director and Choreographer Tom Wyatt. Looking ever so Civil War-era appropriate, the plethora of colors and patterns seen throughout the performance is marvelous. The Valentine’s Day ball gowns are an especially nice touch and serve to awaken the minds of the audience when thinking about the grandeur of such events from a time so long ago. Wyatt finds places to infuse the show, which is not in the least dance-heavy, with sprightly routines that add a lively element to the performance overall. “Five Forever” is the prime example of Wyatt’s choreography, a little jig-like number featuring the four March sisters and Laurie.

The show moves along at an adventurous pace. Wyatt provides rapid scenic shifts that keeps the audience drawn into the tale and he keeps the dialogue scenes flowing flawlessly from one to the next, seamlessly weaving the musical numbers into their fabric with ease. Despite the three hour run time, which may be somewhat due to Artistic Director Tom Colonna’s lengthy curtain speech, Wyatt keeps the audience on the edge of their seats and fully engaged with this show. The show itself, having only a simple story to tell and even simpler music to accompany it, finds purchase of chimerical proportions under Wyatt’s wings. His direction of the production drives home the emotional impact of the story in addition to the plot while thoroughly developing these characters through the impressive talent he has pulled forth onto the stage.

Wyatt’s most impressive display in the production is not, however, the exceptional pacing, the sprinkling of finely stepped choreography, or even the ability to keep the audience engaged with such a simple and time-worn story, but rather is the raw emotional earnestness with which the acted scenes are played. The bitter exchange between Amy and Jo at the fireplace, the tender moments shared on the beach with Beth and Jo at the Cape, these moments which exist between song to build the narrative construct of the tale unfold with deeply ingrained emotions that speak to the audience as if they were written solely for them. All too often spoken scenes in musicals are glossed over and dismissed, but Wyatt ensures that this is not the case with Little Women.

Living up to the haughty caricature of her character’s nature, Holly Pasciullo delivers a perfectly prickly performance as the abrasive Aunt March. With an exceptional handle on her sarcastic deadpan timing, the barbing one-liners quipped at the expenses of others land with solidarity and source a great laughter from the audience. Not without vocal talent, Pasciullo holds her own in “Could You” a duet with Jo, where the finer points of feminine living are articulated in an excruciating fashion. Dismissive, derisive and wholly unpleasant, Pasciullo is a delight to watch as this embittered fusty character and her overall poise only adds to the dry witted charms of her delivery.

Vying for the title of cantankerous old coot, James Hunnicutt takes to the role of Mr. Laurence with a snide and strict grumpiness that almost puts Aunt March to shame. Hunnicutt’s comedic timing is punctually delivered, maximizing the laughs from the audience in a similar fashion to that of Pasciullo’s deftly delivered deadpan. Following the brief yet clearly evident character transformation of Mr. Laurence through Hunnicutt’s charming portrayal, the audience takes great pleasure and amusement in the sillier side of the fussy old grandfather. “Off to Massachusetts”, a duet sung with Beth, is a perfect showcase of Hunnicutt’s rich, deep vocal talent.

Lumping the love interests together hardly seems fair, but when it comes to Laurie (Gino Cardoni), John Brooke (Jim Baxter) and Professor Bhaer (Kenneth Ewing) they all stand on the same platform of impressive performers when it comes to singing, emoting, and acting on the whole. Baxter’s doe-eyed romance with Meg (Amy Luchey) is the stuff of storybooks, which given his astute position as Laurie’s tutor seems almost foolish, but given how quickly smitten he becomes with the eldest March sister, it’s easily forgivable. “More Than I Am”, a duet shared between the pair, grows with a glorious glistening vocal clarity between both Baxter and Luchey as they ground themselves with warm, rich sounds like honeyed tea to sweeten the profession of their love to one another. Luchey has a stellar voice that marries well with Baxter’s when they perform together, and her voice carries a great deal of harmony when singing songs along with the other March sisters.

Kenneth Ewing, the aloof and almost standoffish Professor Bhaer, delivers his character in tried and true fashion, remaining bristly and easily irritated by the antics that unfold around him. Commended for his unwavering German accent, which not only never falters but is also perfectly articulate and understandable, Ewing does a fine job of interacting with Jo and Mrs. Kirk (Stephanie Shade) at the boarding house. “How I Am” is a prime example of his emotional versatility. Ewing imbues this number with rich emotional complexity and his belted sustains are remarkable. Coming together with Jo for the duet, “Small Umbrella in the Rain,” Ewing reveals a full character transformation as well as more of his glorious singing abilities.

Gino Cardoni is a whizzbang of wonder, a peppy pip of perky positivity that is just too precious to be ignored. Popping onto the scene as the eagerly enthusiastic Laurie, Cardoni delivers not only quirky comic moments as the awkward teenaged fella, but a surprisingly well-toned and clearly delivered voice. “Take a Chance On Me,” the first vocal number Cardoni tackles as Laurie, is as refreshing as the white winter’s snow laid across the backdrop of the scene before the ball. Vibrantly living a million dreams in this number as well as the quintet, “Five Forever” (performed with the four March sisters), Cardoni is a radiant burst of energy that is delightfully contagious, particularly once it comes to the saccharinely and syrupy rendition of “The Most Amazing Thing,” a duet shared with Amy.

All little women have a mother, and Marmee (Eileen Keenan Aubele) holds the title of matron to the four March sisters. Aubele has a deeply moving vocal ability that carries the lower ranges as well as the upper ranges that are written into her character’s songs with grace and ease. Her acting ability, much like the acting ability across the board from all of the named characters, is spot on in accordance with the narrative and emotional complexity of the tale. “Here Alone” is an immensely melancholic number where Aubele pulls the emotions through the words of the song, pouring her morose but touching feelings into each word. “Days of Plenty” has a similar echo and again showcases the striking vocal talent that Aubele possesses.

Amy (Jennie Phelps) is a petulant snot of a child. Phelps masterfully captures the juvenile immaturity of the character in her persistent pouting and unyielding whining. Though not featured in a vocal solo until her duet with Laurie late in the second act, Phelps voice blends beautifully with the other March sisters under the Musical Direction of Nathan Scavilla. Beth (Allison Comotto) who is also not featured in a solo song until the second act, is a sweet and mild-tempered child. Comotto’s duet, “Some Things Are Meant to Be”, shared with Jo, is a moment filled with tender and mournful emotions, Comotto’s swan song as it were. Comotto is delightful in the role and finds her footing among the other March sisters with ease.

Christopher Columbus! Someone alert the Weekly Volcano Press to Sherry Benedek’s astonishing performance as Jo March! Carrying the story, both of her sisters and the show itself, Benedek radiates perfection throughout the entirety of the show. Smart and edgy with tomboy flare, Benedek delivers the epitome of the maverick March sister in her portrayal. Stalwart determination blazes like cannon fire in her rendition of “Better.” “The Fire Within Me” allows Benedek to belt her soul forth, shining as brightly as the sun with this moment of self-discovery.  Remarkable in all of her duets and group numbers, Benedek possesses the emotional depth of the Marianas Trench. But it’s “Astonishing”, the Act I finale number that truly allows Benedek to defy gravity both vocally and emotionally, showcasing a full range of her talented abilities.

Whatever you’ve thought of Little Women in the past— be it the book you remember reading in school, the movie you’d seen or any stage adaptation you’d seen— this is your chance to love the show, fall in love with the story all over again, and thoroughly enjoy the tale as it enchants you for an evening. Little Women at Dundalk Community Theatre is the show of their season, a true delight of a musical, not to be missed!

Little Women plays through May 8, 2016 at Dundalk Community Theatre— — College of Baltimore County Dundalk in Building K, at the John E. Ravekes Theatre – 7200 Sollers Point Road, in Baltimore, MD. For tickets, call the box office at (443) 840-2787, or purchase them online.