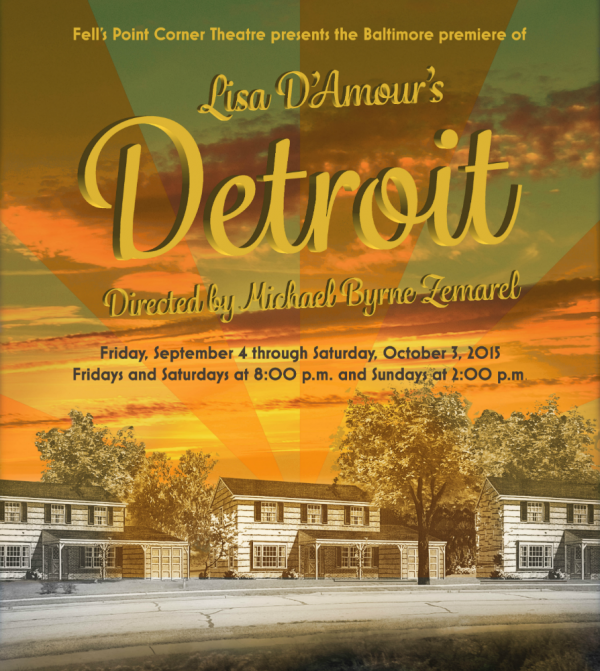 The lost art of communication speaks volumes about the devolution of our existence as human beings. Most of us don’t know our neighbors names or what they do for a living, because who borrows a cup of sugar from the neighbors anymore? Who has time to bake anyway? Fells Point Corner Theatre is baking up a world of poignant drama and dark humor, making the communicative connections that our modern society lacks with the Baltimore premier of Lisa D’Amour’s Detroit. Directed by Michael Byrne Zemarel, this illuminating work will start a conflagration of conversation among theatregoers and may even inspire you to go home and get to know your neighbor.

Playwright Lisa D’Amour, hailed the M. Night Shyamalan of the playwrights, delivers a strong piece of work for the stage bound together with dazing and stunning passages of dreamscape imagery that border on poetic prose. Her carefully crafted characters exist within their own world, one which has been meticulously created with details abound and dimensions aplenty. Winding all of these components into a well-written drama with steep edges of humorous plummets, D’Amour shocks the audience with her twist ending as well as her messages woven throughout drawn together by the show’s drastic conclusion.

Director Michael Byrne Zemarel attacks the work with gusto. Refusing to shy away from the sexual innuendo that is laced into the playwright’s words, Zemarel plays connect-the-dots with the character connections as they unfold throughout the performance. Augmenting the pauses that occur around these textual clues really allows the show’s overall character arcs, relationships, and ultimately the ending to feel connected to one another rather than something that came out of left field, while simultaneously still arriving as a shocking twist.

Zemarel’s approach to D’Amour’s convoluted ideas, which although brilliant often require a mental map to sift through, makes the play as a whole more accessible to the audience. He takes a light touch to the more comedic moments of the play, choosing to let these highly humorous and wildly inappropriate moments cultivate naturally between the actors rather than attempting to mine the script for levity. This approach gives the performance a feeling of existing in a natural reality and allows the audience to be easily swept up in the story without feeling as if they are watching actors work through a play.

Zemarel guides the pacing of the show with perfection, a difficult task to do with any drama, but particularly one as modernly diverse and curiously tangled as the one D’Amour has written in Detroit. The energy levels are continually maximized to their fullest potential as well, which makes the chaotic moments of pandemonium thrilling and titular, but also sheds a glistening light on the more subdued moments as the energy is quickly internalized by the actors to keep it present but not as obviously physicalized.

One of D’Amour’s biggest constructs in the work is the socioeconomical disparity between the two couples. This is reflected most keenly in the collaborative effort of the cast in their costumes. Ben and Mary, the yuppie suburban educated couple wear clothing that consistently matches their lifestyle. Sharon and Kenny look the epitome of backwoods yokels struggling to find their financial footing with Sharon’s daisy dukes and midriff tops lined up perfectly against Kenny’s grungy t-shirts and knee-torn jeans. This overwhelming echo of the play’s economical platforms helps focus the audience to the major differences between the couples, disorienting them from some of the deeper intrinsic issues that occur as the show moves along.

In a play where light is the pun of the locale, Lighting Designer Charles W. Danforth III steps up his game in regards to illuminating design. The special effects that occur toward the end of the production are an amazing blaze of brilliance and cannot be further addressed for fear of giving away the show’s twists, but Danforth’s work in that respect is mesmerizing. There are other moments throughout the performance, however, that can be addressed in regards to his design. A gentle creep of warm pink sunset radiates over Ben and Mary’s back patio during the ‘lawn party’ scene and is subtle enough to blend into the background and yet completely sets the tone for that moment’s mood. Danforth also creates a similar moment when the women are outside at night with the subdued blue lighting and hinted slivers of moonlight that dance upon the rooftop.

True theatrical magic occurs when Set Designer Bush Greenbeck gets his hands on this production. Building a fully functioning, rotating two-house set is an outstanding accomplishment for any Scenic Artist, but particularly given the constraints of the intimate stage at FPCT. Greenbeck creates a magnificent piece of functional art that serves as two separate back patios— one for the yuppie couple and one for the backwoods locals— and the aesthetic matches these notions accordingly. The delicate sky blue siding that melts down into scrubbed brick gives the yuppie couple’s house a sense of polish and pretentiously upper-middle class pride, while the basic grainy wood that frames the other house looks unfinished and scattered. Greenbeck’s work is stellar and a crucial component of this play’s success.

The energy of the production is carried by the four person cast, spearheaded by the Sharon character, who is played by Rachel Roth. Setting an astronomically high bar of expectations, Roth charges through the show with an incendiary blaze lighting her character’s soul, which forces the other performers to race with enthusiasm to keep up the pace. The result is an intensely driven and wondrously motivated piece of theatre that keeps the audience’s attention from the moment the play opens through to the bombastic conclusion of the show.

Having only a momentary cameo of an appearance, Larry Levinson appropriates the character of Frank with a heartwarming bittersweet nostalgia that kindles the spirit. Though only given a moment’s interaction with the show’s other characters, his picturesque monologue of a time gone by is delivered with soul-assuaging sincerity. Levinson lives presently in his wistful memory, capturing the essence of how neighborhoods used to exist when people knew their neighbors. A charming, albeit disjointed, fragment of D’Amour’s larger agenda, Levinson delivers this moment with stirring verve.

Taking on the socially awkward half of Ben and Mary, Greg Jericho as Ben settles into the role in his own fashion. Nerdy and uncertain but with goofy misplaced charisma, Jericho lets the prevalent tension between he and Mary (Beth Weber) surface early in the performance. This allows for the plot to thicken with haste and showcases a strangulation of relationships through the simplest of exchanges. Weber delivers the epitome of a high-strung, edgy and anal-retentive middle-aged professional woman whose life is about to unravel but is being held together by a singular neurotic thread. In the middle of the first act Weber delivers a striking confession to the character of Sharon and portrays ‘wit’s end’ in a harrowing but completely believable fashion as her sanity unwinds physically, verbally, and emotionally.

The character interactions between Weber’s Mary and Rachel Roth’s Sharon are some of the most fascinating in the production, superseded only by the blatant sexual entanglement between Sharon and Kenny (David Shoemaker.) Looking a bit like a disgruntled ex-porn star of the 70’s, Shoemaker eases into the disturbingly hilarious role of Kenny with practiced patience. His accent is the subtler of the two when it comes to the backwoods couple, but his energy— though often internalized— matches hers line for line. It’s their constant canoodling and outlandish flirtations that drive the chemistry between their characters in the show that make his portrayal intriguing.

Rachel Roth carries the blazing banner of fully charged energy in this production; a true team leader that corrals the efforts of her co-stars into pushing this performance to its fullest potential. Roth is an enigmatic energetic firework who erupts onto the scene like an rainbow sparkling wrecking ball creating a path of gloriously blinding and beautiful destruction in her wake. Whether it’s her insane rant about the dog that Sharon and Kenny don’t own, her deep emotional disruption about knowing the neighbors, or the ludicrous elation over going camping, Roth owns each and every moment that her character stakes a claim to, and does so with unrelenting passion and panache. Her commanding presence captivates the audience and entices them to laugh, gasp, and cheer— among a great many other things— throughout the show; a true fiery spirit that guides the performances like a burning beacon through D’Amour’s work.

The performances are real, the subject matter one that can easily be taken to heart. Uncover yourself and your neighbors and the truth behind such situations with a viewing of FPCT’s production of Detroit. It’s the perfect firecracker to kick off the fall season.

Detroit plays through October 3, 2015 on the main stage at the Fells Point Corner Theatre— 251 S. Ann Street in historic Fells Point of Baltimore, MD. Tickets can be purchased at the door or in advance online.