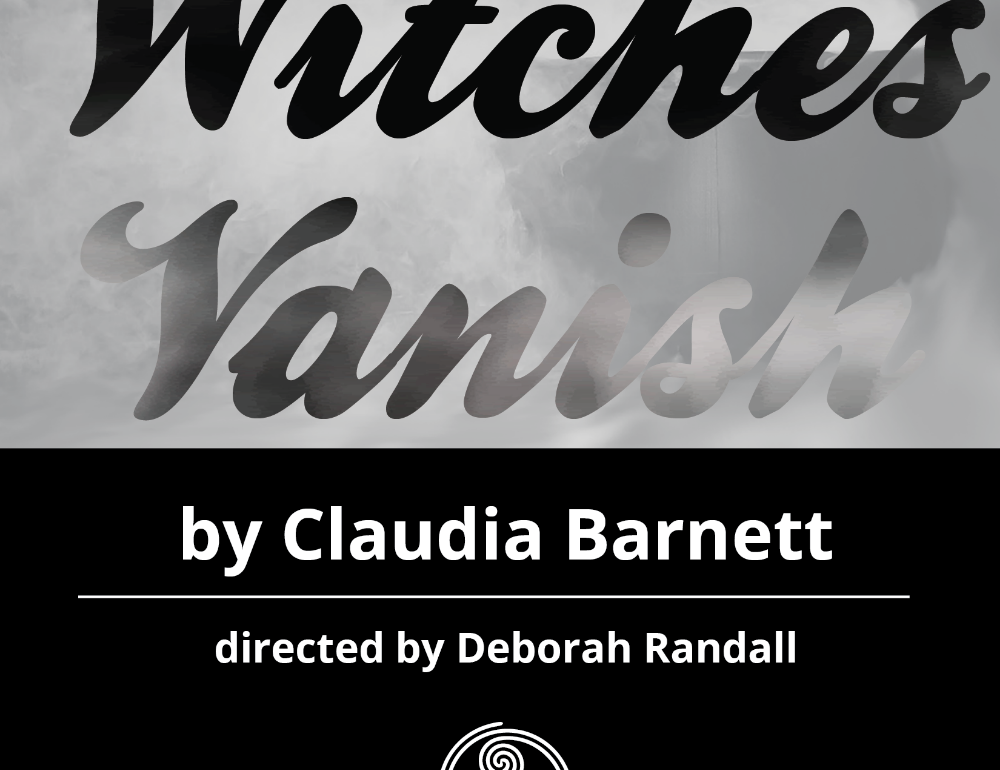 Fair is foul and foul is fair when tragedy runs through the air. How long can a blind-eye be turned to the everyday tragedies of woman that vanish? From Juarez, Mexico to right here in the United States, women are vanishing all the time— be it physically or erased from their identities of religion and culture by oppression— it has become a cultural phenomenon that is all too often not addressed. In an evocative new work by renowned playwright Claudia Barnett, Witches Vanish comes to Venus Theatre in conjunction with the Women’s Voice Theater Festival. Directed by the company’s Founding Artistic Director Deborah Randall, this harrowing piece ensconces the audience in the grim reality of a gruesome cultural fairytale as experienced through nine interwoven vignettes. Gripping, engaging, and jarring, this new work possesses theatrical integrity as well as a formidable message.

Witches Vanish is not the first of playwright Claudia Barnett’s work to come across the Venus Stage under the fierce Direction of Deborah Randall. This prior working knowledge of Barnett’s style enhances the experience for theatergoers immensely as Randall transforms the well-written word into a living theatrical sensation without the bells and whistles of contrivance or sensationalism. These two colossal presences in their field are the perfect representation of female-powered work in the theatre. They are unafraid, unapologetic, and uncompromising with the work, Witches Vanish, pushing the envelope of comfort to the audience so that the gravity of the situation contained within the play’s major themes is actualized.

Barnett’s work is striking and raw. Her inclusion and focus of women not only vanishing from Juarez but from all over the world throughout time is a harsh reality that needs to be discussed and her vessel of discussion— this intricately woven series of vignettes— is the epitome of conversational starters when it comes to the dialogue between the performers and the audience. Barnett’s piece is flooded with imagery, both beautiful and haunting, grotesque and serene. This juxtaposition of beauty, a traditional trait of femininity, and garish destruction creates a shockwave of evocation that echoes again and again throughout the duration of the performance.

Director Deborah Randall approaches the piece from the inside out, focusing on the emotional impact of the situation’s reality. What do you do when no one will help you discover what has happened to your vanished daughter? Where can you turn when it is the government who is responsible for the vanishings? How do you cope with a loss that great? All of these questions are addressed and answered in a symbolic fluidity that eases the piece along from one scene to the next. Keeping with her through-line of the season, Randall incorporates a darkened fairytale element to this production by including masks (designed with Tara Cariaso of Waxing Moon Masks.) This use of masks serves a twofold purpose, dehumanizing the women to show how easily they are erased from their existence in addition to making them universal; a mask covering a face is used to represent the “everywoman” in these circumstances.

Randall furthers the concept of darkened fairytales with the use of distorted puppets and dolls. Seemingly harmless objects that are a long-standing tradition of feminine childhood or girlhood, these puppets and dolls are put to gruesome purpose throughout the production. One particular scene uses a disfigured marionette puppet-doll as the main focus for a particularly disturbing but realistic subject matter, making the story easier to pallet as it separates reality from actuality, creating a beautifully surreal incarnation of the tale. Randall drives the pacing of the show through each of the scenes, moving the show with a graceful connectivity that really bridges the gaps between the tales.

Choosing to adapt the work, originally slated as a three-person show, Randall includes two additional ‘characters’ listing them only as Shadow Witches (Jennifer Berry and Leticia Monet.) This inclusion of these phantoms is a curious approach to a great many things in this performance, including the identity of women and the show’s overall symbolism and themes. Berry and Monet slink along in shadow (in gloriously dark glimmering robes designed by Randall and masks from Waxing Moon Masks) and become an integral part of the scenes where the three witches recite their iconic texts from Macbeth. At first Randall infuses these shadow-witches as the cauldron themselves, rocking and simmering as each vignette bursts open, but with every added disappearance the cauldron grows and the shadow witches can no longer contain the great losses. They are ever-present, a representation that someone is always watching these girls as they vanish— even if no one else recognizes that they are gone.

The striking design element that delivers the play to its full potential is the Soundscape create by Sound Designer Neil McFadden. Working conceptually with Randall to deliver the full impact of these vanished women, McFadden creates voice recordings of vanished statistics— the name of the woman, her age, and where she vanished from— and plays them in stacked loops atop one another. These uniquely disturbing sound bites play between scenes, and at times are so jumbled that you can only hear snippets or fragments of who these women were and where they were last seen. This is a brutal but brilliant symbolic representation of the way these women have been lost to the world, their identities vanished in a jumble of other worldly events, and is emotionally unsettling to hear. McFadden also creates other evocative sound effects for the various vignettes throughout. Whether it is tinkling ice and howling wind when a scene is beyond bleak, or realistic atmospheric sound that augment the scene’s location, McFadden crafts an awe-inspiring Soundscape that tells the tale of these women with due respect.

Listed only as Witch One, Witch Two, and Witch Three, these three individuals take on multiple roles throughout the process of this performance, existing as witches that cackle maniacally when a scene comes to its unfortunate end before easing back into the three disturbing voices of fate that they are. The performances across the board are well grounded in the show’s ever-shifting reality and make for an intensely captivating 90 minutes of live theatre.

Vivian Allvin, who starts the story off as a sprightly young girl, delivers the unshakeable reality of children vanishing as she revisits the character and tale of ‘La Cenicienta’ multiple times throughout the performance. Her innocent naiveté makes digesting what happens to her a truly difficult undertaking for those with emotional openness in the audience. Versatile and complex, Allvin takes on other roles throughout the performance, including a stomach-turning delivery of a five-year-old that is delivered with unyielding and horrific honesty.

Lakeisha Harrison is featured in a great deal of scenes that involve Barnett’s beautiful imagery. During a scene entitled “Swimming in the Afternoon”, Harrison unfolds vividly illustrious imagery in her text, heard not only in her voice but seen in her eyes. The same is true late in the show when she takes on a different persona, discussing her ‘moonchild.’ The emotional shift in this later scene is astonishing as she starts out a loving and deeply moved mother and morphs into a twisted and disgusted thing; a sad but true reckoning of what happens to children that are ‘snatched and ruined’ from their villages in Africa. Harrison has a commanding stage presence and has a distinct cackle when transforming back into one of the witches three, as if she is the leader of these darkened hags of fate.

Tara Cariaso brings a musical gift to the performance. Her sensual and serene voice is featured singing in various sketches throughout the production, adding a tranquil yet haunting sensation to these moments. “Swimming in the Afternoon” entreats the audience to her surreal representation of a mother hen, where her physicality and speech cadence are delivered exactly like those of a chicken. Cariaso also takes on the innocence of a sheep in a later scene, and plays this moment with demure sincerity. Fully present in each character that she adapts, Cariaso holds the attention of the audience throughout the performance, especially when she takes to narrating a section of the story.

The show is non-linear and exists both inside and outside of time and location. That is what makes it unique. The messages wrapped within the text and performance action is what makes it worth seeing. Barnett and Randall have fused a partnership of reality and fairytale, of existence and fantasy that shines light on a dark and taboo subject that needs to be addressed. A stellar and inspiring new piece of theatre with cultural and gender relevance is being unveiled at Venus Theatre, and this is the moment to take the opportunity to come and see it.