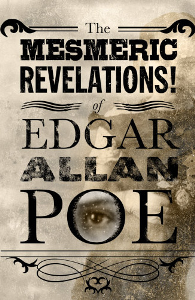 Are you asleep? Good. Let us begin. A vestibule awaits your arrival inside the doors of the Enoch Pratt House; a house preserved in time and seldom available to the public. Instructions await you from one of the house’s many stewards— exploring is encouraged, speaking unless spoken to is prohibited, unearthly events may occur. An intensely immersive theatrical experience like no other in Baltimore, Washington, or any of the surrounding metropolitan areas, The Mesmeric Revelations! Of Edgar Allan Poe is quickly becoming Baltimore’s own Sleep No More— a site-specific New York attraction of a similar nature based on the Bard’s tragedy Macbeth. Baltimore’s rich flirtatious history with Edgar Allan Poe sets the tone for this hallowed evening amid the halls and rooms of the historical manor home; a perfect setting for thrills, chills, and the mesmeric.

Fact. Fiction. Living Dead. It’s all present. Save for Edgar. Or is he? A truly remarkable and unique exploratory experience infuses its way into the ether of existence for two short hours of the evening’s time. A haunting and intense venture that will leave you questioning, disturbed, but thoroughly steeped in the otherworldly essence of a time that out steps our own. Conceptualized by Glenn Ricci and Directed by Ricci with Susan Stroupe, this one-of-a-kind experience is an intellectually fascinating thrill-attraction the sort one might imagine around Halloween. With six live…presumably live at any rate…inhabitants that interact with the audience and each other throughout the course of the evening wondrous strange things are bound to happen.

The space alone is a staggering; a breathtaking manor with treasures and delicacies laid throughout it would be easy to turn a blind eye simply to explore all of the little secrets decorated inside the manor. Scenic Designer Kel Millionie has enchanted the era of Poe into the home; segments set apart from one another so that rooms melt into one another like a dream that bleeds as it shifts. Ursula Marcum, responsible for the hundreds of props and brilliantly curious set decorations enhances the experience for the individual with her intricate world of mysteries wrapped into each element. There are cabinets, shelves, books, poems; so much to discover and uncover that one could see the show at least once just to absorb the aesthetic.

Driving the performance— if one must call it such— forward is the ever present soundscape crafted (save for a few tunes) by Glenn Ricci. It is unearthly; inhuman; sounds from another world— perhaps another time. Ricci’s pulsating music swells to augment moments like the séance, dropping to a hush in other more chilling moments. Spiritual essence lingers in the soundtrack that Ricci has created; wafting through the house like a subtle mist that quickly morphs into a dense fog when crescendos of music overtake the scenes.

Costumes Designer Stephanie Parks invests in the couture that Poe popularized in his time; the gothic dark look that permeates the very fibers of the soul. Black is a trending color though Parks’ work is not without its colorful essence and lace. The garments suit the actions and paint a layer of character onto these mobile inhabitants of the experience; dress-up for the denizens looks dapper, daring, and deadly.

The experience itself is impossible to describe; an event that defies words. A blow-by-blow account wouldn’t even come close to doing the evening justice as every person’s experience is individual. The residents of the manor will engage you, some more than others, and some result in secretive explorations of areas otherwise restricted to the public. Follow these phantoms at your leisure, and remember often that extraordinary things happen in places and with people when very few people are looking.

The cast of humans who have embodied these spirits trapped out of their time are extraordinary in and of themselves; fully ensconced in the world that has been created around them. Though each have names there are none really recognized until the evening’s conclusion. Their professions, however, are easily identifiable given the nature of their interactions both with each other and the guests attending the manor for the evening.

The Detective, as he were (Alexander Scally) is most methodical. Hell bent, perhaps, on solving the heinous murders that surface, his character is stoic and a bit unapproachable if maddened with passionate drive. Scally cuts an intimidating figure, particularly when he raises his voice and is found mainly to the front of the main room in the house’s left. Question cards make his story that much more intriguing, but be mindful as he is a man on a mission.

Perhaps the most disturbing or disturbed individual of the evening is The Barkeep (J. R. Baker.) Like an entity out of The Twilight Zone there is a terrified frenetic energy inside of this Barkeep that once it erupts there is no turning back. Seemingly at first made of wax Baker delivers a truly frightening impression of a still-life statue, which becomes all the more warped as the show gets under way. While Baker’s character can usually be found patronizing the bar, which is tucked conveniently under the staircase toward the back of the long foyer, the Barkeep is not without movement and secrets of The Barkeep’s own.

Eliza (Jenna Rossman) is a curious character in her own right. Though I followed her the least in my time spent inside the Mesmeric Revelation— not for a lack of interest mind you— she comes with her own frightening quirks and sassy attitude that somehow deviates from the expected timeframe. Rossman’s character is obsessed with performance and certainly knows how to make an interest down the grand staircase when the time comes for it.

Sarah (Shannon Graham) is a physicalized representation of the woe and macabre overtones that haunt Poe’s work. Almost a wraith of sorrow, Graham’s character is in a state of perpetual mourning. Drifting about through the house as if time and space are inexplicable fantasies to her, Graham’s character is definitely of interest. It is her character’s interest in the intricacies of the set’s decorations that really awaken the other senses— those of scent and touch— that guests are invited to engage throughout the performance.

Virginia (Natanya Washer) is another curious character trapped out of time and space. Washer’s physical distorting moments, a great deal of which take place in the smaller room off to the main hall’s right (the one with the piano) are beautifully grotesque or perhaps grotesquely beautiful and a bit spine-tingling to behold. Her awkward silence sets her apart from the muttering and weeping of Sarah or the boisterous outspoken nature of Eliza.

And there is V (Tanner Medding.) Summoned simply by a knock at the door and looking much like a proper gentleman or a Viscount, Medding’s character is shady at best. As if he were not a part of the house, Medding stalks about making contact with the others as if he were a visitor or an intruder. There are striking moments that guests must discover when it comes to this character called ‘V’ but only under the right conditions and in the right locations can they be witnessed.

Seeing the show more than once is an absolute must. There is no way to witness and experience everything on just one evening inside the manor. As the events is free-form, there is no requirement that you be in any one room at any one time. Simply obey the rules, be mindful of Edgar, and do not let the madness consume you before you wake.

The Mesmeric Revelations! Of Edgar Allan Poe occurs on select evenings through May 1, 2015 in The Enoch Pratt House at The Maryland Historical Society— 201 W. Monument Street in Baltimore, MD. Tickets for this event are currently sold out, but be on the lookout for added dates by keeping up with the website.

A Dream Within A Dream: An Interview with the Co-Creators of The Mesmeric Revelations! of Edgar Allan Poe

Review: Poe’s Last Stanza at Do or Die Mysteries
Close