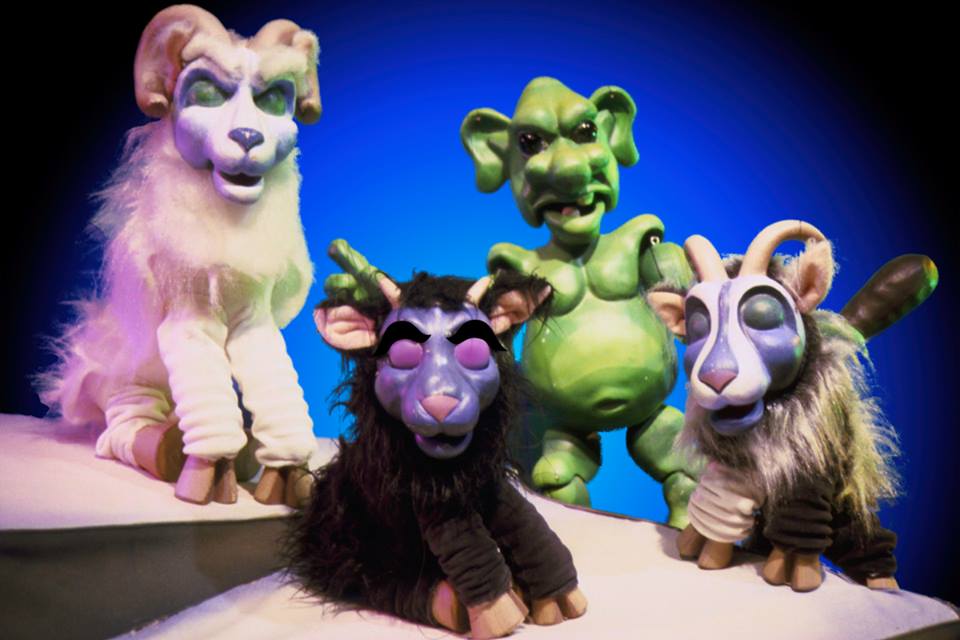 Once upon a time there was a magic little puppet theatre who told exciting children’s stories with even more exciting puppets! The Puppet Company at Glen Echo Park is moving further into the fall with their production of The Three Billy Goats Gruff. Narrated and performed by Company Founder Christopher Piper, the tale as you remember it is perfect for children of all ages and is customary has a few little humorous nods for the grown-ups in the audience as well.

The tale of the Billy Goats isn’t a terribly long one so this particular performance includes an extra special introduction to the three main types of puppets that are used at The Puppet Company. Christopher Piper greets the audience and quickly has them paying rapt attention as he introduces the three main types of puppets— hand puppets, rod puppets, and marionettes. But the fun doesn’t stop there as Piper encourages the children to make hand puppets using their very own hand.

In a fun and fantastical demonstration using only his thumb and fingers (and later a simple rubber ball and felt) we are introduced to Maribelle, one of the oldest hand puppets in Piper’s repertoire. She’s a fun and spunky gal with a lot of comedy to offer to the audience. The children also get introduced to Madam Wazo, better known as the Evil Stepmother from Cinderella, who is a rod puppet. There’s even a very special marionette bear named Bimbo! He does incredible tricks with Piper’s help. It’s an exciting adventure that is part of the show before the story begins and the children seem to eat up every minute of it.

Once the story starts, Piper takes to using marionettes which are fascinating to behold in action. Three goats— little brother goat, middle brother goat, and big brother goat, all live on the side of a gorgeous mountain. The structure of the set allows Piper to rest at ease in the top of the mountain and manipulate the marionettes from above. The rotating set piece is magical in its own right, slowly spinning around when the goats need to head toward the scary troll bridge.

Piper is a master of the marionette, not only in their movement but in manipulating more than one puppet at once! His movements are fluid and after a while you don’t even notice the strings. The other unique quality that piper brings to the show, as he plays all of the puppets, is the distinctive and different voices of each character whether it’s the wise, albeit severe, big brother goat, the nonsensical jibberish speaking little brother goat or the grumbling troll at the bridge. Piper has an individual sound and approach to each one.

The troll at the bridge is by far the coolest of the marionettes as he is built disjointed and his limbs fly comically apart when the moment is right. Watch out for his glowing eyes! Another brilliant show perfect for introducing children to the true wonders that are puppets.

The Three Billy Goats Gruff plays through November 21, 2014 at The Puppet Company in Glen Echo Park— 7300 MacArthur Boulevard in Glen Echo, MD. For tickets call the box office at (301) 634-2270 or purchase them online.

Review: Rapunzel at The Puppet Company