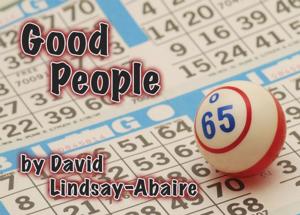 Silver Spring Stage closes their 46th season with a riveting production of David Lindsay-Abaire’s Good People. This captivating dramadey about life struggles from rock bottom is both humorous and heartwarming; the perfect combination of reality and optimism blended into a brilliantly acted evening of theatre. Directed by Michael Kharfen, it’s an emotionally engaging opportunity to view life from many angles, including the less fortunate.

Set Designer Mike Hovde creates two contrasting locations within the confines of the uniquely angled stage. The initial scenery is crude and simple; covering a variety of scenic locations from the back alley of a Dollar Store in South Boston to the impoverished interior of Margaret’s home. Using fold-out panels, Hovde makes the transitions from one location to the next an ease that does not overburden the scene changes. It’s Hovde’s inspirationally lavish set that arises from the deep interior of the stage in Act II that catches the eye. Representing a posh home interior of Chestnut Hill, the walls are a rich green, the floor is hardwood slatted, and the living space is tastefully adorned with expensive accents. The difference in the sets juxtaposes the reality of the play’s socio-economical overtones into reality for the audience to visualize.

The scene changes move efficiently and are delicately overlaid with clever soundscapes created by Sound Designer Kevin Garrett. Often taking trendy music with lyrical relevance, Garrett expedites these changes with songs that drive the tempo. His use of background noise is sparing, but fits when necessary to heighten the authentic sense of the play’s realism.

Director Michael Kharfen works the nuances of the script to perfection. The writing is brilliantly layered; deeply entwining socio-economical thematic elements with heritage and pride in ones’ roots. Kharfen’s ability to drive the focus of these themes through his actors is impressive. The expertly crafted moments of silence during tense scenes between Margaret and Mike are ferocious and intense; fueling the emotional flames of the scene without utterance or movement. Kharfen’s approach to the play as a whole speaks volumes of his ability to address modern standing issues in a theatrical endeavor that compels the audience to think, feel, and experience reality with an objective opinion.

The acting in the production is sublime. The approach to the “Southie” accent is consistent across the board, with the exception of Dottie, but as her character is a bit off the beaten path, marching to her own drum, it feels as though the accent slippage is intentional. Margaret and Mike master the sound of true Boston spirit; simple phrases and delivery making all the difference in this production where the main focus is attempting to arise from the roots of one’s past.

Stevie (David Dieudonne) is explored as a mostly reactionary character. Despite his brief appearances, Dieudonne has fully conceptualized his character as if he were a main player. The jumpy and anxious physicality imbued to the character in the opening scene is expressed vigorously; clearly creating an identifiable persona and concise character choices. Most of Dieudonne’s responses in scenes are played out through silent facial expressions, whether they are exasperating frustration with Margaret in the opening scene or perpetual state of disturbance and confusion during the bingo scene; all are intriguing and very entertaining to watch.

Dottie (Declan Cashman) lives up to her character’s namesake; being just a bit off-color in her quirky ways. Cashman’s approach to the role adds humor to some of the more tense situations, particularly at the bingo hall. Her spastic verbal outbursts that seem to come from outer space add hilarity to the general conversation conducted between the three main female characters in Act I.

Jean (Marianne Meyers) is a brash and mouthy pistol. Capturing the essence of a true Boston Southie, Meyers creates a gritty character that borders on scintillatingly scathing in her sharp delivery of zingers and quips. With a broadsword for a tongue, Meyers bashes down Dottie, Stevie, and even characters that are only ever mentioned in one bristling blast of her gruff-natured existence. Truly a scene-stealer during the bingo hall scenes, her menacing and threatening physical responses to Stevie are uproarious, particularly her ‘approving arm-punch.’

Kate (Tanya Baskin), as the only non-Southie in the play, brings a spirited balance to the show. With her calm and collected persona and distinctively non-Bostonian accent, Baskin draws the outside world into the sheltered lives of the native Southies. Her emotional expressions— often done through a quick glance or perfectly delivered silent pause— are heavy and carry through the entire scene with a swift and weighty gravity. Her interactions with Mike and Margaret create some of the most edge-of-your-seat intense moments in the production.

Mike (Kevin Dykstra) does an exceptional job of establishing his nerves and waning patience early on in the performance. Dykstra’s scenes with Margaret (Roxanne Fournier Stone) have impeccable pacing. Their initial encounter in his office becomes a well-paced race up an emotionally tense cliff-face; each building upon the other’s remarks and banters until it all comes to a fascinating head. Dykstra’s face is particularly animated, especially when his character becomes confounded by Margaret.

Stone, as the protagonist, is a stunning performer who truly delivers her character’s story in the rawest and most accessible fashion. The tension that her silences— and often her razor-witted quips— create between her and Mike are so thick that they could be split with a cheese knife. Her emotional delivery during the penultimate scene at Chestnut Hill is shocking and tumultuous and a true reward for the audience that has been captivated by her story up until that point. Stone has a sensational command of her gritty, streetwise Southie character, making her believable and likeable in one fell acting swoop.