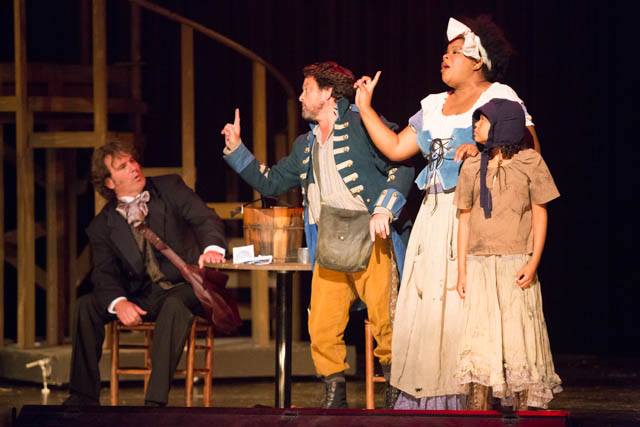 The question of ,‘Do you hear the people sing?’ is being heard all throughout the Baltimore and Washington area this summer as Les Misérables makes its way across the professional and community theatre circuit. Howard County Summer Theatre joins in the revolution with their production of the Broadway sensation and with a cast of over 100 individuals there is no question as to whether or not you can hear these people sing. Raising their own army of support right upon the stage, HCST has the largest cast for a powerful blast of sound in the area this summer. Directed by Tom Sankey with the Orchestra led by Kevin George, the beautiful music is delivered with strong voices, and a good smattering of local talent.

Constructing a barricade is never an easy task and Set Designer Joe Blasko goes back to the traditional basics, filling the stage with a cluttered assortment of wooden furniture procured from the streets by the students. Blasko fits wooden staircases— both spiral for Fantine’s final descent and militaristically squared for Javert’s approaches— into the set but his most impressive feat is the staging for “Javert’s Soliloquy.” Both Blasko and Director Tom Sankey pay a tribute to the original way in which the scene was staged before theatres began getting caught up in the technical spectacle of flying actors or creative interpretations that change the script. The bridge set is stunning in its simplicity and with a subtle strobe effect (compliments of Lighting Designer Lauren Stetson) the entire moment is one of striking tragic beauty.

The cast is filled with an exceptional handful of noteworthy talent, and with over 100 people would be hard not to be. Many of these talented voices and personalities pop up in the ensemble. Sankey, working with Choreographer Amanda Tschirgi, finds fascinating and creative ways to block the multitude of people throughout the performance that does not overwhelm the audience with their presence. One of the best examples that springs to mind is during “At the End of the Day” when the street-urchin ensemble start out in a clump and in staggered and jarring motions that match the rhythm of the music, diffuse themselves forward crawling and lurching toward the audience like a desperate blood-thirsty mob. “Master of the House” has similar creative blocking, allowing Thènardier to mince his way through the masses making the number a foppish little comic routine.

A hands down show stealer is the character who never utters a word and is seen only briefly just before “Master of the House.” Little Eponine (Camden Lippert) catches the eye during her sassy encounter with Little Cosette (at this performance Nicole Wildy.) Strutting herself across the stage as Madam Thènardier (at this performance Kay Washington) tells the other child off, Lippert gives a comic mocking performance of the young girl that has the audience in laughing hysterics— a new comic moment in the otherwise heavy emotional production. Other performances of note include the strong vocal solos performed by Grantaire (Cameron Cox) throughout various student numbers, including “Drink With Me.”  Enjolras (Steven Fleming) also brings a powerful voice to the mixture of students, leading the students to revolution.

The staging of the show is impressive, one of the most striking moments coming to mind being the staging of “Empty Chairs at Empty Tables” where the Director, Choreographer, and Lighting Designer (Sankey, Tschirgi, and Stetson, respectively) work together to create a truly harrowing image of the students parading in as shades of their former selves. It is little moments like these created among the masses that sets the HCST production apart from other largely-cast productions.

Marius (Justin Moe) brings a strong and clear voice to the ingénue character and certainly has his pick of the ladies as both the roles of Eponine and Cosette are double cast. At this performance, Eponine— played by Christina Mattera— and Cosette— played by Megan Crampton— bring depth and character development to the stage alongside Moe’s portrayal of Marius and the three voices blend splendidly for the “A Heart Full of Love” trio. Both Crampton and Mattera have impressive and powerful voices that translate emotions through their songs, really evoking expression from their character’s woes. Crampton’s rendition of “A Little Fall of Rain” is moving and Mattera finds layers of depth in the usually vapid character of Cosette during “In My Life.” Moe rounds out the trio with strong emotions playing out ferociously during “Empty Chairs at Empty Tables.”

The show becomes a presentation, many of the lovely voices relying solely on the beautiful well-recognized music to tell the story of Jean Valjean (John Day) and others. When performers like Todd Hochkeppel growl into the grit of a character like Thènardier during “Dog Eat Dog” it makes that moment of the show that much more interesting. Javert (Matt Scheer) approaches his existence in a similar fashion. With an operatic sound that swells to fill the auditorium during numbers like “Stars” and “Soliloquy” his voice carries the fine tune of both these songs with vocal brilliance.

With strong and beautiful voices, this is an opportunity to experienceLes Miserables at Howard County Summer Theatre. This production’s use of double-cast roles gives audiences a unique opportunity to see the show performed in several different ways. Enjoy the show while you can as it is only around for a few weekends.

Les Misérables plays through July 12, 2014 at the Howard County Summer Theatre in the auditorium at Mt. Hebron High School— 9440 Old Frederick Road in Ellicott City, MD. Tickets may be purchased in advance, from a cast member, at the Chatham Mall Music & Arts Center, or in advance online.