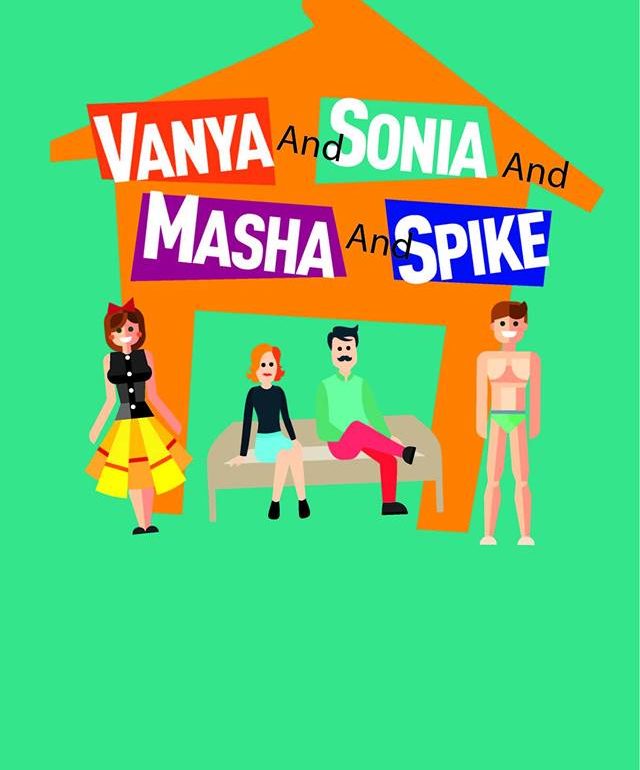 Dances With Durang: Cockpit in Court presents Vanya and Sonia and Masha and Spike, by the author of The Actor’s Nightmare, and it’s a theatre nerd’s dream. Cockpit in Court at CCBC Essex (formerly Essex Community College) presents Christopher Durang’s homage to Chekhov through August 6th at the Cabaret Theatre in the Robert and Eleanor Romadka College Center. This play has a morsel of everything— comedy, tragedy, suspense, horror— wait, no. There is no horror. I am horrified for a few moments, but I’m supposed to be, so that’s fine.

The show is 32% farce, 27% surrealist, 53% Chekhov, 17% Albee, and if you’re okay with that math, you’re heading to the right show. If you’re fond of the classics, if you’re unflustered by absurdism, if you don’t mind nearly naked actors, if you’re unbothered by contextually appropriate F-bombs, you’ll find a lot to enjoy in this show. If you’re dragged along as someone’s hapless date, there’s wine for sale in the lobby. And you’ll probably like the show better than you think you will.

You’ll find the college just off 695’s Exit 7 for Rosedale, although the campus is still called Essex. There’s plenty of free parking, with sections named for the Greek alphabet, which gives you a slightly better chance of remembering where you’ve left your car than a regular letter designation. Not all of it is currently accessible, as there’s some construction currently underway. Expect a bit of a walk from parking to the curb, then again from the curb to the doorway, on a slight hill. Mobility-compromised theatregoers might encounter issues with the approach, so allow plenty of time, and any device of personal assistance appropriate. There’s ample space to accommodate such things. The Cabaret is upstairs in the clean and well-lit Romadka College Center, and rather resembles what used to be called a Multi-Purpose Room. Don’t accidentally wait downstairs, because the main theatre is presenting Sister Act.

I’m a fan of Durang’s work. I think it’s fun, even when I don’t understand all of it, which is most of the time. My best pal, a Neil Simon fan, thinks Durang is weird. That may be why, though I find Neil Simon very funny, I prefer Christopher Durang. This is a particularly theatrical piece of theatre, and deliberately so. I find myself wishing I’d thought to keep track of all the theatre references at the beginning, because there are so many. The dialogue is great fun. At first, every character sounds pretentious— and I’m not sure I like any of them, honestly— but somehow, I get used to their speech patterns and in the middle of the second act, I discover I love them all.

The cast serves up a heaping helping of comedy— each of them have beautiful timing, and Director Linda Chambers clearly understands that each character must have an individual approach to comedy, and she arranges shining moments for everyone individually as well as in groups. Patrick Martyn plays a solidly befuddled Vanya, who is accustomed to being comfortable. His moments of discomfort are a squirmfest of hilarity. Liz Boyer Hunnicutt brings to Sonia a slightly melancholic vulnerability, flavored with bright dashes of both fury and hope. Her face is delightfully mobile, and I’m retrospectively disappointed that I haven’t seen her perform before. As Cassandra, Laura Weeldreyer displays excellent comedic chops in each of her abrupt mood switches. Holly Pasciullo brings a brittle tension to Masha, only gradually revealing her underlying fragility. Her sudden laughter and moments of self-deprecation are exquisitely realistic. Spike, as played by Tim Neil, is obliviously vain and self-involved, and lovely Anna Steuerman plays Nina with a dewy freshness that makes Masha’s furious reaction to her very existence completely understandable.

Production values are perfectly perfect for the venue: lighting lights properly, sound comes in on cue, and the set stays where it belongs and doesn’t block the view. The setting of a lovely farmhouse in Bucks County, PA, is less idyllic-sounding than in the past, considering recent events, but the sense of relaxed tranquility communicates clearly. I can see how this would be a difficult space for a set designer, but the clever solution of doorways at each of the corners works. You may not be able to see all four of set designer Moe Conn’s wonderful portals clearly, depending on where you’re seated, so be sure to look around at them during intermission. My favorite is the window, which is very nicely done. Costuming a contemporary, or nearly contemporary, show might seem less fun than period pieces, but costume designer Alyson Shirk comes up with some inspired choices. Masha is the picture of glamour every minute, even in her beautiful nightgown, except for the moment when she plans to be at her very best, which is how comedy works. Cassandra’s…. whatever they are’s…owe as much to jersey fabric as Jersey Shore, in an endearing and lively way.

Snacks, sodas and wine are available both pre-show and during intermission. The Cabaret Theatre permits food and drinks inside, as it’s set up like a cafe, though only water is permitted in the mainstage theatre downstairs. I quite enjoy my $4 glass of wine. The restrooms are large and clean, capable of accommodating the Cabaret crowd with minimum waiting. Tonight’s audience seems playful and relaxed, and presumably more technically savvy than most audiences, as actor bios are available only by accessing one of those weird QR codes that I thought had gone the way of AOL and MySpace. It’s printed on the 8×10 sheet that serves as a programme. There is a workaround for those of us who won’t relinquish our flip phones, however: get a teenager to read the tiny web URL and type it into your search bar.

Vanya and Sonia and Masha and Spike plays through August 6, 2017 at Cockpit in Court in the upstairs Cabaret Space of The Robert and Eleanor Romadka College Center at the Community College of Baltimore County Essex Campus— 7201 Rossville Boulevard, Essex MD. For tickets call the box office at (443) 840-2787 or purchase them online.

Vanya and Sonia and Masha and Spike at The Highwood Theatre

Vanya and Sonia and Masha and Spike at Colonial Players

The Unexpected Guest at Cockpit in Court
Close