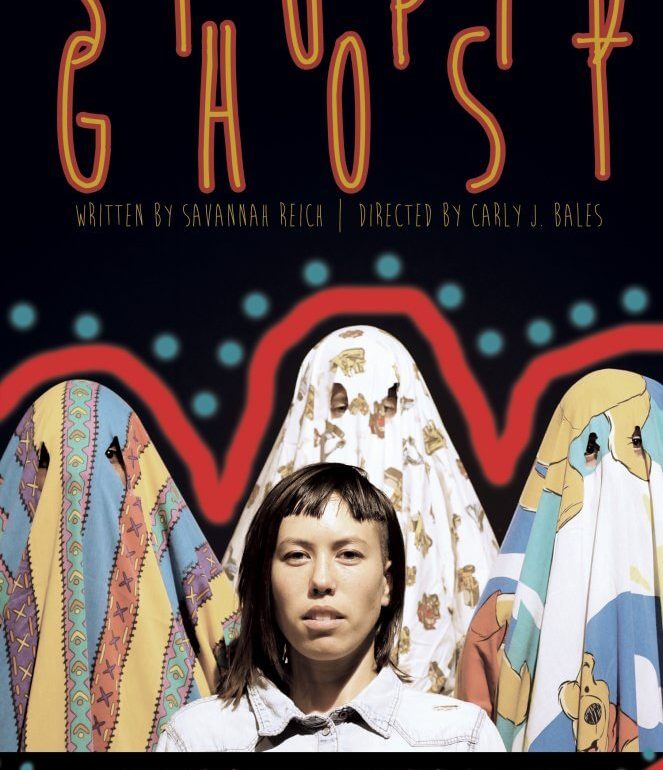 The broad specter-spectrum when it comes to ghosts is limited to the dichotomy of baddies and goodies. There are the spook-you-till-you-scream, chain-rattling, malevolent haunts that will get you. And there are the friendly kind— the happy haunts who materialize for a midnight spree with the vocalizing and harmonizing and socializing. But what if neither of those categories were true? What if ghosts just were? They exist; they drift clueless in the woods while listening to music and have no intention of helping or hurting you. You might even venture to say they’re dumb, even more so when the humdrum non-existence of their post-mortal coil is disrupted by an encounter that turns their focus to the living. Kicking off their 2016/2017 season, Annex Theater Baltimore presents the east coast premiere (being just two days shy of the world premiere) of Savannah Reich’s Stupid Ghost. Directed by Carly J Bales, this extemporaneous exploration of how ghosts navigate their world is an hour-long endeavor to engage with these ethereal entities on an esoterically evocative level. Charming and laced surprisingly with heart, this witty neo-surrealistic play feeds the audience a dose of humor, with profoundly enlightening considerations to keep in mind

There is little to be said by way of complaint about this production, with the largest slight being that much of the lighting feels arbitrary. While Lighting Designer Rick Gerriets’ design work intricately encompasses the nocturnal element of his luminary plot (a dual effort achieved with an assist from Projections Designer Sonya Norko), it’s everything else that possesses an ill-placed charge, particularly the random color fades— like the occasional off-green focus on certain characters when they speak. Despite the lighting being somewhat unbalanced, it is synchronized in working solidarity with the soundscape cultivated by Sound Designer David Crandall. Capturing the essence of an outdoor area at night, Crandall invites the audience into the realm of the play and uses these soundscapes, often like a tempting through-line to settle into the realm of the play’s reality.

Costume Designer Jordan Matthews brings about the lighthearted and almost irreverent tone of the play’s humor with the vivid garments that are attributed to each character. In addition to these plucky selections, the name labels— in their most basic sense, like “ghost” or “mother (possessed)”— are affixed firmly to the front of the outfits to add a documentary style commentary in this humorous vein. Matthews’ most impressive construct in the costume world, however, are the traditional ghost bedsheets. Crafted out of juvenile patterned sheets with little holes cut for eyes, these drape-on sheet-costumes are a nostalgic throwback to childhood in addition to being a blanket stereotype for how so many of us perceive ghosts.

A nod of boo-gie (see what’s happened there?) goes to Choreographer Madison Coan, not only for the fluid movement of the meandering ghosts at the top of the show, or the slow-motion capture of startling movement at the show’s conclusion but largely for the wild dance-party ghost quartet throw-down, which features some wild and entertaining moves among the four sheet-covered ghosts. The dance not only fits the avant garde nature of the play but gets the audience bouncing their butts along in the seats as it happens.

Playwright Savannah Reich has made a profound commentary on ghosts as a whole tucked away inside a simplistic and a bit silly of a teenage melodrama. The profundity of the play comes to a full head during ‘brief taxonomy of ghosts’ segment, which features Kevin Griffin Moreno addressing the audience as a Lecturer who has appeared from outside the context of the show, which up to that point was actively in progress. Reich’s exacting language with Moreno’s smooth and ominously tranquil voice creates an eerily inviting presence, cultivated by the way Director Carly J Bales guides this moment of show out into the house. It is Reich’s poetic statement here about the true nature of ghosts and what they really encompass that haunts the audience long after the play’s conclusion.

Reich’s writing overall is smart. There is a cleverness to the way she has penned the characters, particularly Ghost (played with spirit by Emily Hall.) Dismissively narrative in the way that only a late-aged teen can be, Hall serves as the narrative poltergeist to the story’s tale. It’s her haunting glassy eyes, which are perpetually glazed with a hint of death even when she’s excited about tasting life, that rivet the audience to her portrayal. The tone of her voice, the careful way in which she places certain words into the ether, all of these lens serve to tie the threads of the living world to that of her ghostly experience in a highly amusing and yet deeply unsettling and strikingly beautiful way. 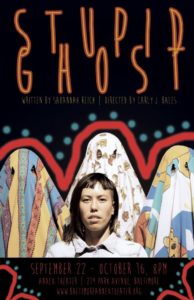 Bales, who works the intricate nuance of Set Designer Ren Marie’s playful space to its fullest potential, finds ways to shift locations swiftly and keeps Reich’s work moving forward, paralleling the way the world doesn’t stop turning despite souls departing to the realm of ghosts. Ren Marie, as the individual responsible for the slightly spooky forest, proves to add a layer of locational simplicity to the show, allowing the audience to be drawn into the quirky personalities of these characters, rather than the external decorative factors of the play’s world.

The remaining three performers— Trevor Wilhelms as the possessed mother, Mike Smith as the perpetually confused teenage boy John Pierre, and Danni Tsuboi as Ronnie aka “pretty girl”— each settle comfortably into the script working alongside and opposite of Emily Hall’s Ghost. Wilhelms’ possesses as madness in his portrayal, which is fitting considering the zany nature of the character that he adapts while Tsuboi delivers a much more straight-laced grounding, rooted primarily in the fear of the character as Ronnie’s world flies apart at the logical seams. The “open-mic” style scene featuring Tsuboi delivering a heavy confession is a sharp moment that grips the attention. Smith, as John Pierre, has a firm handle on the notion of “awkward teenage boy” and this caricature representation only adds to the unfortunate and humorous situation in which the characters find themselves.

So go, live a little. Get out and see Stupid Ghost at Annex Theater. You wouldn’t want to be haunted by a missed opportunity that could transform itself into one of your many ghosts, would you?

Stupid Ghost plays through October 16, 2016 at Annex Theater— 219 Park Avenue in Baltimore, MD. Tickets may be purchased at the door or in advance online.

Review: The Lord of the Flies at Annex Theater

Review: The Master and Margarita at The Annex Theater