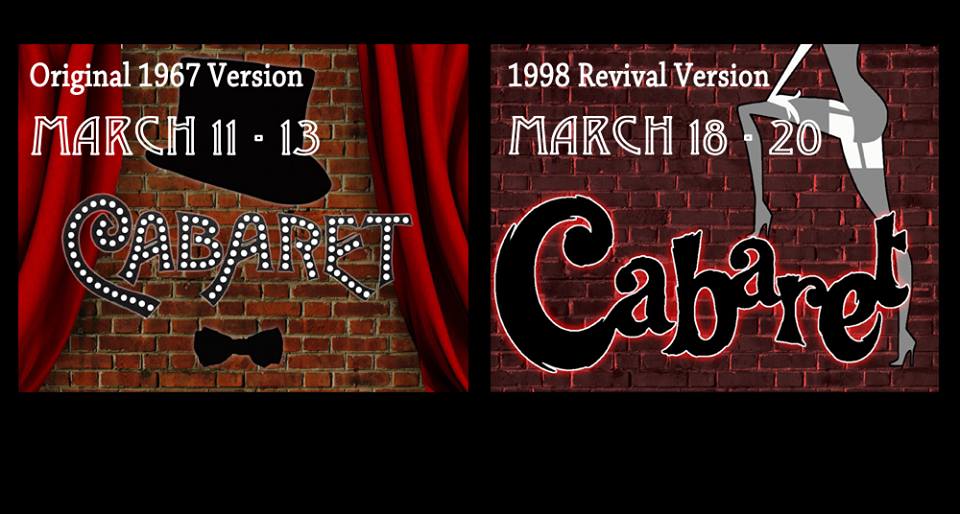 Willkommen! Bienvenue! Welcome! Fremde! Etranger! Stranger! For a one-weekend limited engagement of just five nearly sold-out performances, The Highwood Theatre of Silver Spring has been transformed.  Meine Damen und Herren, Mesdames et Messieurs, Ladies and Gentlemen…The Highwood Theatre is proud to give you, and don’t forget to give it back when you’re finished with it, the 1998 revival version of Cabaret! Performed inside the tawdry yet tasteful Kit Kat Klub, the revival version of Kander and Ebb’s racy musical is an astounding production the likes of which you’ve never seen, if for no other reason than the level of dedication and commitment that these high-school-aged performers are delivering consistently throughout the show. Directed by Matthew Nicola with Musical Direction by Kevin Kearney, this evocative performance showcases a plethora of talent and visionary concepts from the imaginative minds of the future of theatre. 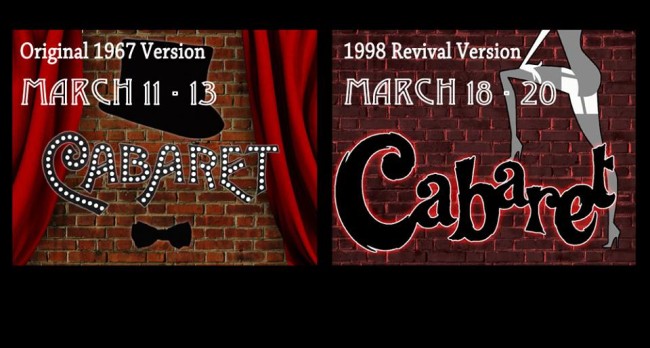 The Highwood Theatre space is intimate to say the least and the notion of mounting a full-scale, full-length musical— particularly one known for its vast scenic changes and lively atmosphere— is a tall order, but an order that is filled to the brim with vigorous aplomb by Set and Lighting Designers Matthew Nicola, Kevin Kearney, and Toly Yarup. (Nicola is the ’98 revival director, Kearney music director for both productions and Yarup the director of the ’67 original, which was performed the weekend previous with a cast of middle-school-aged students.) Nicola, Kearney, and Yarup transform the space into a runway, perfect for the tawdry and tempting Kit Kat Klub. The way in which the design team trio focuses on the minutia of the space’s layout— red and white chalked graffiti on the walls or spangle streamer curtains draped behind the pit— creates a specific aesthetic curtailed to the dark but delicious nature of the show.

Their combined efforts to create a solid and emotionally guided lighting plot for the show is particularly impressive given the unique staging space of the performance. Falling into the well-recognized notions of green floods during “The Money Song” and softened blue spots when Sally sings her more harrowing cabaret solos, the trio of designers affects notions of strong pathos to the audience, creating striking visual cues that are well matched to both the performances and the music of the production.

A show like Cabaret demands more than just a salacious salt in the air from scenery and lights, however. This poignantly pungent punch is delivered from Costume Designers Tip Letsche and Erika Sparks. Finding costumes that appropriately hint at the lewd conduct inside the Kit Kat Klub while fitting the bill of 1931 Germany is no small task when outfitting high-school-aged performers. Add to that fabricating costumes that allow for access of quick-change, as the cast is doubled and tripled up to fill some 20-0dd roles with just nine performers, and Sparks and Letsche have their work cut out for them! The sequins are a tasteful touch every time they appear in the club dance numbers, but it’s the more period-appropriate pieces, like the cameo broach on Fraulein Schneider’s very frumpy dress, that catch the eye. Sparks and Letsche also do an exceptional job of giving Sally Bowles a classy look that speaks of her English tastes and her nightclub addictive lifestyle.

The most boldly ambitious thing that arises from this production is Director Matthew Nicola’s overall vision of the performance. With just nine actors executing nearly two dozen roles, the idea that such a show could not only be cohesive and fluid but simultaneously entertaining and enjoyable is somewhat chimerical, but with Nicola’s commitment to his framework and the dedication of the young performers, the show becomes a smashing success. With the exception of the Emcee and Sally Bowles, every performer doubles up as a Kit Kat Klub boy or girl in addition to their principal character. (It becomes even more amazing as these sensationally talented students sneak off to the sidelines to play instruments as a part of the live orchestra, bringing the concept of “Life is Beautiful” into a full rotating circle for this production.)

Nicola’s overall vision focuses on the most important element of any performance— telling the story. Creating emotional attachments among the performers to the scenes in which they are acting in addition to what they are singing becomes a crucial part of Nicola’s production and this allows the audience to really connect with these characters and their journeys. Nicola and the design team even infuse projected footage from the times against the back wall to cover some of the trickier scenic/costume changes (as getting people out of their Kit Kat Klub couture and into appropriate character clothing can be quite challenging), and this immersive approach really saturates the audience’s experience of 1931 Berlin.

A well-deserved round of applause needs to be given to Choreographer Imani Gaston. The routines, though simple in their existence, are complex in their execution and reflect a sharp connection between the darkness of the show’s book and the fun and playful nature of the music. The intense kick-lines that resurrect themselves again and again throughout the process are some of Gaston’s finest work and should be praised, not only because they have great synchronicity but because of just how well they are fitted across the very narrow stretch of stage up near the orchestra.

Victor (Henry Wiebe) and Bobby (Christopher Brown)— or is it Bobby and Victor?— either way both are fantastical Cabaret Boys, but where they really shine is in their roles as Clifford Bradshaw (that’s Victor!) and Herr Schultz respectively. Brown’s overall approach to Schultz is meager and somewhat introverted, which is perfect for the coy flirtations he shares with Fraulein Schneider throughout the entirety of the first act. His singing voice is dulcet and delicate, making duets like “It Couldn’t Please Me More” and “Married” delightful little tunes. Wiebe, though not given as many chances to showcase his vocal prowess simply because Kander & Ebb failed to write a great many songs for Cliff, has an equally round and fulfilling sound when singing his verse in “Perfectly Marvelous” and the haunting verse he delivers leading into the “Finale Ultimo.” Wiebe also has strong emotional ties to his character, especially when it comes to bursting in fits of rage and frustration during the second act.

Leora Cherry, who along with Max Rome and the rest of the Kit Kat Klub members, provides such wonderful sources of pre-show stimulation getting out among the crowd and really enticing the audience to play along. Cherry performs the German verses of “Married” while a dazzling mirror-ball of blue and silver float through this number, her voice matching the luminescent quality of the light trick in this number. Rome, who also plays the eager Ernst Ludwig, is quite versatile as well, sliding into a more sinister existence once the plot goes from light and fluffy to deep and dark. Sydney Acuff is another Kit Kat performer who takes on multiple roles including that of the Gorilla during “If You Could See Her” and really draws the audience into the number by loping down to the stage’s edges and getting sweetly into the faces of everyone watching. Keep an eye all three of these performers during the bigger ensemble dance routines as they really keep pace with the movement of the songs.

Shannon Leach, whose primary role is that of the saucy and edgy Fraulein Kost, gives the audience something to talk about when playing with her sailors (performed mostly by Acuff, and once by Dylan Kaufman.) Mindfully present when in her Kost-character moments, Leach delivers a bristly dose of comic relief when it comes to arguing with Fraulein Schneider (Madison Middleton.) Leading into “Tomorrow Belongs to Me” (the second time it is heard), a duet that is shared with Rome’s Ernst Ludwig character, her robust voice carries her well-crafted German accent into the song with the appropriate gusto and sentiment for what is truly happening in that scene.

Middleton, who like the rest of the cast takes up as a Kit Kat Klub dancer, grounds her performance of Fraulein Schneider in a harrowing reality. Truly magnificent when it comes to inviting the audience into her journey, Middleton evokes brutal emotional realizations, actualizing a complete and shifting story arc for her character, especially when it comes to singing “What Would You Do?” Displaying that her innards are composed of fierce German grit and pride mingled with fear, desperation, and uncertainty, Middleton steals the show with this number. Bonus praises are deserved for her ability to carry her intensely German accent into her singing voice. Fully aware of her spatial relationship to other characters, the audience, and her own existence on the stage, Middleton is a powerful performer with a stellar voice that creates her own remarkable reality inside this world of Nazis on the rise in Germany.

Hello, Darlings! We didn’t forget Fraulein Sally Bowles (Ally Peek) not in the least. Vying for the front runner spot of the show against the enthusiastic Emcee (Dylan Kaufman), Ally Peek delivers a unique interpretation of the English club girl that really shakes up any preconceived notions that the audience may have about the character. Peek has exceptionally vivid facial expressions and with the intimacy of the venue this allows for her internal thought process to be more readily visible. Taking the character in the vein of the high-strung cocaine addict, Peek explodes emotionally throughout the performance and does so with panache. Her voice is strikingly powerful and there are full belted moments of hard and heavy sustains that showcase her ability to perfection such as the end of “Mein Herr” and “Life is a Cabaret.” The most haunting moment of Sally’s story is when Peek flies apart at the seams at the end of the aforementioned number creating a beautifully revolting moment like the glorious carnage of a train wreck from which you cannot avert your eyes. Versatile and vibrant, Peek is the perfect match for the part.

Dylan Kaufman masters the mark of a true showman. Charming, cheeky, and charismatic, Kaufman’s willingness to play with the audience, make perpetual eye contact, and engage fully with them whether he’s singing, speaking, or dancing, makes him a one-of-a-kind Emcee. This fun enthusiastic and eager nature is a sharp contrast to Peek’s frenetic and frantically spastic existence. But don’t be fooled by Kaufman’s convivial candor as his character is not all fun and games. Hitting the dynamic and drastic shift from fun and fancy free to gravitationally grounded in the severity of the situation, Kaufman showcases his darker side quite viscerally; the moment he utters out “to me” at the end of “Tomorrow Belongs to Me” and the iconic knife-twist ending of “If You Could See Her Through My Eyes” are so shocking and dark that it hardly seems to have come from the same person. Loaded with a contagious energy, Kaufman lives up to the title of master of ceremonies and ensures that every moment of the production lives up to the show’s overall vision: Life is Beautiful.

Stunning, stellar, and wonderfully engaging, this youth performance of Cabaret is quite the dream and quite the show. Be sure not to miss it during its one-weekend engagement at The Highwood Theatre.