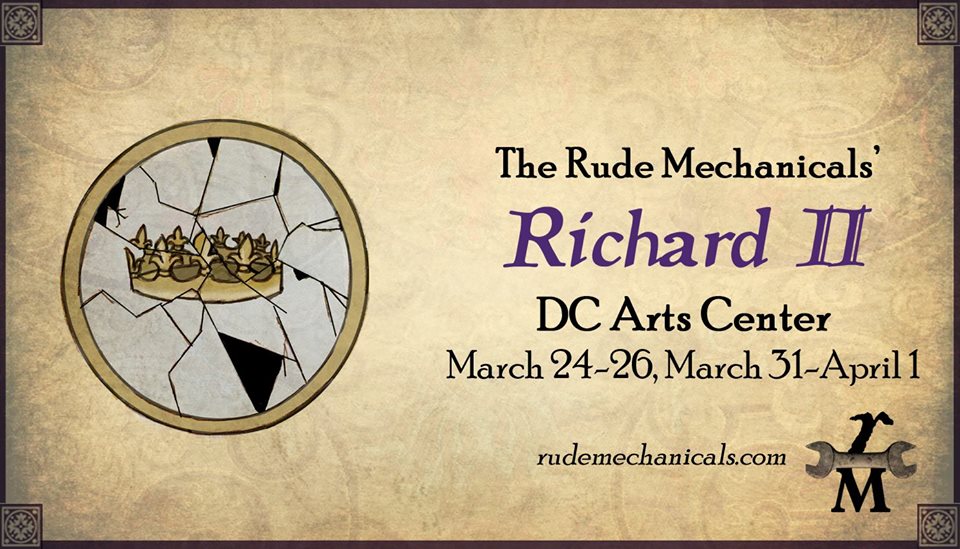 When first to speak on the venue known as the DCAC

But fear not, playgoers, for I share with you

Laboriously titled The Life and Death Of

They present to you from one floor above

A judiciously rendered version that moves quite free

Of this early and poetic tale of history

Directed by Michael F. McCarthy and penned by the Bard

‘Tis a ho-hum tale, ‘t’wont make you think too hard.

No cripple on this stage will audiences’ see

Excepting York and his palsy, but that’s just one hand

One small choice from one very tall man

Let me stop the hyperbole and purple prose too

And get to it proper, by it— this review

While Michael F. McCarthy is the show’s Director, Assistant Director Alan Duda has stepped up to the plate with a long-coming concept deep in hibernation with The Rude Mechanicals now brought to light and fruition. Bridging the gap between the company’s audience and the work they do has been a long-standing goal of Duda’s as well as of the company. Finding a way to make Shakespeare more accessible to the masses who are not necessarily familiar with the text, the time, the language, etc., or who enjoy theatre but just don’t have a readily working knowledge of Shakespearean understanding, is something Duda has achieved with the framework he has layered over this current production of Richard II.

Introducing the show, in full period getup, as “PSI”— meaning pre-captioned for the Shakespearean Impaired— Duda plays the role of William Shakespeare himself, “spoiling” the plot as the show gets underway. In a clever and well-crafted series of rhyming verses that follow the iconic meter of the Bard but use modern language, Duda provides little couplets of information before each scene to allow the audience a basic understanding of what they’re about to witness. This is an excellent way to make a connection with the archaic text and dated language used therein. By providing a similar cadence and rhythm of speech patterns, laced with modern words, the audience— even those familiar with Shakespeare (and especially those who are but find the histories to be dull or uninteresting or confusing)— are more readily able to process and digest the scenes they witness. Duda deserves a pat on the back for his ability to create clever rhyme— all of which he penned himself— that tells the story without giving away too much in each of the explanatory interludes.

Director Michael F. McCarthy is able to take a lengthy, albeit poetically striking, history and judiciously render it into a swiftly moving, abridged stage adaptation that keeps the plot and character strengths intact. McCarthy should also be praised for his subtle use of stage blocking when it comes to the limited venue space provided in the DCAC. During the tower encounter, McCarthy stages both parties in parallel stances to one another, both facing outward with one party staring out and upward as if craning their gaze up to those ensconced in the tower, and the other party glancing downward. This allows for suspension of disbelief when it comes to the lack of scenic difference and overall physically leveled play space. Overall the pacing of McCarthy’s production is smooth, no hiccups or bumps along the way, though the nature of the show itself is somewhat dull. This is a factor that sadly cannot be helped; Shakespeare simply didn’t pen Richard II to be invigorating and full of gruesome action or hysterical antics.

The fluidity of the production’s pacing is assisted by Sound Designer Eric Honour, whose inclusion of sound effects is sparing but well matched to the overall simplistic aesthetic of the performance. A clopping horse hoof here and there along with the somber tolling of bells when appropriate is all Honour needs to draw the audience into the theatricality of the experience, keeping it realistic without adding too heavy a dose of sensationalism. Lighting Operator Luke Craver assists in this department as well, shifting the lights up and down whenever the character of Shakespeare is speaking and again when scenes start and finish. These basic approaches to designs, along with traditionally period appropriate costumes done in the vein of minimalism, allow the audience to focus on the substance of the plot rather than the spectacle of theatrical engagement.

There are few downsides to the production, other than the show’s inherent dullness, which to some may be fascinating, and on the whole is no one’s fault but Shakespeare’s. In an attempt to age his character, the Duke of York, actor Joshua Engel takes on a forced vocal mutation which softens his speaking and even in the intimate spacing makes him difficult to hear and understand. This problem persists in his moment of uproarious outrage, as Engel takes the character to a polar extreme of raging fury, but is shouting so forcibly that the articulation of his words go by the wayside. This aside, Engel’s performance is well-received, particularly in the consistency with which he affects his physicality— demonstrating York’s palsy.

One of the most enjoyable characterizations in the production is that of John of Gaunt, portrayed by Wayne De Cesar. The reeling monologue, which features many a pun on his name, is fascinating, delivered with a perfect balance of humor and severity and the sudden switch between the two happens so flawlessly that it’s an oral sleight of hand. Note too De Cesar’s brief portrayal in the second act as the Queen’s Groomsman, a hilarious little burble of understated comedic relief in the production, complete with a fusty affection of voice and appropriation of physical stance. The Queen (Claudia Bach) says more with her reactive listening, as expressed through detailed facial features, than she does with the actual text she is given, rendered to almost nothing in this edited version of the production. Bach does err on the side of emotionally overactive when retreating into her text, but it makes the parting scene between her and the titular character rather striking.

Our brief encounter with The Duke of Norfolk Thomas Mowbray (Peter Eichman) is fleeting but memorable. Appearing only in the scene where he is banished, Eichman makes the most out of his glorious seconds in the spotlight. With a ferocious temperament and equally frightening stance and sense of physical presence, Eichman makes Mowbray a character to be feared. This, however, is juxtaposed sharply against an equally ferociously present Earl of Hereford, Henry Bolingbroke (played by the incomparable Jaki Demarest.) With vibrating vim, Demarest goes for the jugular in this verbal spar against Eichman, and the resulting war of the words is an intense one.

Demarest delivers an emotional roller coaster of an experience as Bolingbroke. The harrowing finale scene, featuring the brutal dismissal of Exton (Liana Olear) and the end of Richard II (Sarah Pfanz), is Demarest’s pearl, shucked clean with brute emotional strength from the play which she’s transfigured into her oyster. Olear, whose approach to entering that scene is quite remarkable, flees upon Demarest’s outcry and even if it weren’t scripted in that fashion, her response makes Demarest’s expressions that much more meaningful.

Like a color guard on the march for Demarest’s banner of brilliance in this production, Bishop Carlisle (Lynda Clark) and the Duke of Aumerle (John Wallis) create moments of poetic justice around her, serving as her council and as physical decoration to her insurmountable stage presence. Clark and Wallis, much like Erin Nealer, playing Sir William Bagot the Knight of the Shire, hold their own in scenes with Demarest, making for an intriguing dynamic of characters and the way that several of these characters have been amalgamated from other characters which did not make the final cut in the production.

Sarah Pfanz dons the crown quite literally as Richard II.  Bringing a rare but uniquely appreciated youthful exuberance to the titular role, Pfanz does a brilliant job of creating a sympathetic character out of this child-king. Pfanz’ mannerisms and overall approach to the text readily portrays the naiveté and simplicity of the character without delving into the potential veins of adolescent tantrums, madness, or other pitfalls that all too often gather around this iconic Shakespearean character. Much like Demarest, Pfanz has an exceptional hold on the Bard’s language, meter, and overall delivery of the outdated text and makes her emotional connections with the character crystal clear.

The production on the whole is unique in its endeavor to bridge the gap between non-Shakespearean theatergoer and Shakespeare’s work and on the whole is well done, well worth investigating. The production has five performances over the course of its run, tickets are limited as the venue has limited capacity. Do not wait to purchase your tickets for The Life and Death of Richard II.

The Life and Death of Richard II plays through April 1, 2017 with The Rude Mechanicals at the DC Arts Center in the Adams Morgan neighborhood of the district— 2438 18th Street NW, Washington DC. Tickets are available for purchase at the door or in advance online.

Review: The Life and Death of King John at The Rude Mechanicals