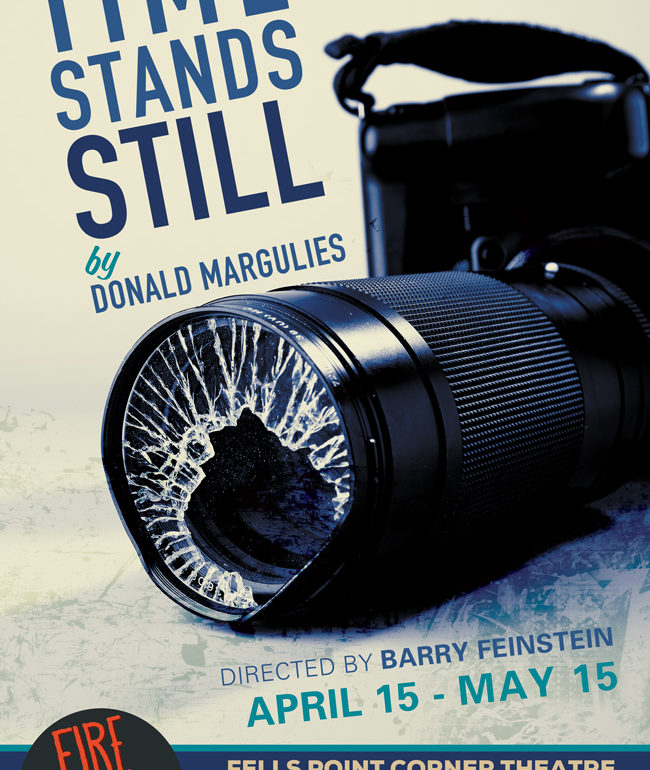 Can something be cathartic and desensitizing at the same time? In order to achieve catharsis then you must feel something but if you’re desensitized then you’re numb. Such a phenomenon is possible, as proven in the climactic and harrowing drama Time Stands Still by Donald Margulies now appearing on the Main Stage of the Fells Point Corner Theatre. Directed by Barry Feinstein, this shattering theatrical experience is a memorable masterpiece that shakes the fibers of your core beliefs, drawing a clear dividing line in the sands of current political issues. Evocative, brutally haunting, and emotionally visceral, Feinstein and the cast of Time Stands Still brings a potent dose of poignantly relevant theatre home to Baltimore in an unforgettable show that exposes hell on earth made palatable and packaged as an evening’s entertainment.

Donald Margulies’ story is so striking on its own that intensely labored upon aesthetic details are unnecessary trappings that would weigh the production down overall. Keeping this in mind, Set Designer Bush Greenbeck and Lighting Designer Charles Danforth III approach the play from a minimalist angle of simplicity. Greenbeck’s set is, however, worthy of praise not only because of its basic existence and staying purposefully out of the way of the show’s story telling but because of the gritty verve it provides subtly simmering in the background. The walls are plain, but slightly soiled, the way you’d imagine a loft style apartment in New York City to be in this day and age. The vaulted walls with skylight fixtures is a nice touch to the aesthetic on the whole to create depth in an otherwise limited space.

Director Barry Feinstein works with Dramaturg Barbara Migeon to carefully bring the work, which is hardly dated, forward with an even more poignant relevance. Shifting the references from the Iraqi conflict to the current Syrian refugee crisis gives the play an immediate urgency because of its topical relevancy and drives the emotional dynamics of Margulies’ writing home even harder for anyone following the news. There are a few hiccups in Feinstein’s breakdown of the beat structure that create miniscule moments of rushing or awkward pauses, but these aside, he delivers exemplary vision to the four-person cast consistently throughout the production.

The caustic chemistry that drives the four characters of Margulies’ work is penned perfectly into the script and articulated with exacting precision by a cast of dynamically talented actors. James and Sarah exist outside of Richard and Mandy while simultaneously wending their lives through the supporting characters’ existence. The opinions addressed and expressed by Margulies in the dialogue exchanges are harrowing and emotionally heavy. The cast does a stellar job of thoroughly articulating each of these arguing points and making these characters and their viewpoints frighteningly realistic in such a way that drives both brutal catharsis and shocking desensitivity home to the audience at the same time.

Mandy (Linae’ C. Bullock) is a stereotypical airhead sort of character. Feinstein’s initial approach to having Bullock deliver the character as campy and melodramatic is a bit over the top, almost unpalatable, but is later reprieved by her deep emotional grounding to the character’s outcries in the second act. Bullock showcases a tremendous switch of personality from Mandy in the first act and Mandy in the second act and it’s her bitingly honest monologue asking what is “an ordinary person” like her meant to do that really stings with deliberate force.

Richard (Jeff Murray) initially appears as the throwaway character, the take-him-or-leave him sort that may have been written into the script for balance of the other extreme character types. Murray’s interpretation gives the character of Richard a rich depth and a firm grounding in the archetype of the American Dreamer, the man who just wants to enjoy the simpler things in life. Versatile in his delivery, whether it’s mouthing off hard at James or doting upon Mandy, Murray gives a lively performance that settles into the groove of the show right alongside the others.

James (Michael Donlan) and Sarah (Claire Carberry) are the core of Time Stands Still. Both in their moments of volatile argument or deeply expressive tenderness, their relationship dynamic is constantly disrupted by one thing or another. Donlan and Carberry understand the dynamic of their characters’ story arc and deliver with certitude one of the most gripping and dramatic series of arguments experienced on the FPCT main stage in quite some time. The overlapped pacing that Feinstein gives the couple has a painful authenticity to it; the shouting over one another in real time echoing exactly the way real arguments unfold when heated tempers and stubborn passions butt heads.

Carberry’s initial physical portrayal of Sarah is heartbreaking to watch. Her struggles with panting and breathing as she hobbles to the couch in the first scene have a heavy hand of realism influencing their every step. Stuck deep in the emotional mire of her character’s PTSD, Carberry delivers some truly haunting moments both early on and later in the performance when breakdowns come into play. Emotionally solid and tethered with shocking strength to the beliefs of the character’s feelings, Carberry does Sarah a great justice in her portrayal.

Donlan has something strangely artificial about his overall delivery to the character of James, but in this instance it actually serves the work. There is a forced feeling to a great deal of his earlier exchanges with Carberry but this folds perfectly into the relationship dynamic and when the proverbial shit hits the fan in the second act there is an epiphany of clarity that crosses through his character making those contrived moments feel surprisingly authentic for being forced. Achieving a brilliant catharsis at the top of the second act during his drunken rant, one of the most poignant takeaways from the play is exploded in gruesome color in this moment.

Unapologetic for its raw emotional exposure, and fully prepared to draw forth tears while simultaneously emptying the audience of all feelings, Time Stands Still at Fells Point Corner Theatre is an evening of sharp contradictions that will tear you emotionally asunder and change the way you evaluate your connections to current hot-topic issues.

Time Stands Still plays through May 15, 2016 on the main stage of the Fells Point Corner Theatre— 251 S. Ann Street in Fells Point in Baltimore, MD. Tickets may be purchased at the door in advance online.