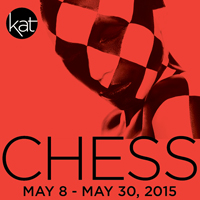 We go on pretending that stories like ours have happy endings. But in the game of chess, who can say where the story will end? One king conquered, one queen fallen; a gripping story of love, war, and a deceptively simple board game set to stirring music comes to live in the Kensington Arts Theatre production of Chess the musical. With their most ambitious production to date, KAT succeeds in winning over the audience with the Music of Björn Ulvaeus and Benny Andersson, the Lyrics of Ulvaeus and Tim Rice, and the Book of Richard Nelson. Directed by Lisa Anne Bailey with Musical Direction by Scott Richards, this mesmerizing musical will captivate the heart, ensnare the senses, and touch the soul in fashion most evocative.

Astounding does not begin to describe the beauty and sheer grandeur of the set that Scenic Artist James Raymond, and his large team of set constructionalists, has put upon the stage of the Kensington Town Hall. In what is recorded as the largest and most intensely involved set design in KAT history, Raymond brings a harrowing fairytale concept to life before the eyes of the audience with his massive sweeping columns that tilt backward like toppling rooks. The stage thrusts out, marbled to perfection in its painted design with black and white as well as blue and purple inlay, and draws the action of the show that much closer to those watching. From the dripping chandeliers and the shimmering curtains of ethereal glitter there is something mesmeric and intriguing about the set that holds a sense of mysterious wonder to it. Given the magnitude of the events happening within the show, Raymond has matched the set design perfectly to the performance.

Courtney James and Nick Carter work together to craft the couture end of the show’s aesthetic, matching the iconic chess board to the fashion statements conceived upon the characters. Checkered patterns as well as monochromatic grayscale coloring dominates the fashion lineup in the pressed suits and stiff skirts of the 80s. Carter and James are not without hints of color, however. A delicate lapis necklace adorns Florence later in the show, and hints of other blue and purple tones can be found sprinkled throughout the costumes; a subtle compliment to the blue and purple of the floor and distorted whimsy of the backdrop. Jewel tones in those same blues, purples, and  hints of gold accents populate the unfathomably fanciful outfits on the ensemble for “One Night in Bangkok” displaying that Carter and James know color as well as they do black and white.

Masterfully creating emotion with the use of light is Lighting Designer Ben Levine. As each scene draws to its conclusion, Levine dims the lights into a moment of suspended animation; a dusky silhouette falling on the stage and the moment looks like a frozen capture of the sentiment that closed the scene. These moments of shadows that serve as still life representations of the emotional turmoil of the show are serene and haunting. Levine showcases his knowledge of precision dramatic lighting as well, not only those captured silhouettes of living actors but during the chess match and the arbiter’s number at the top of the second act. A purely exquisite use of lighting ties together the many aesthetically pleasing design elements of this show creating visual perfection throughout.

Musical Director Scott Richards fills the auditorium with the swells of the overture and carries those eerie, albeit beautiful, melodies throughout the performance in perfect balance of volume and tempo. Never overplaying the performers and marking pace to them without exception, the sound of live music is the perfect complement to this performance. In addition to conducting the orchestra, Richards is responsible for the intense senses that radiate from the ensemble. Particularly during “Arbiter’s Song” where the ensemble exudes a ferocious sound in their backup chords, Richards’ work is greatly approved of and appreciated.

Director Lisa Anne Bailey imbues the show with high stakes, taut dramatic tension, and earnest characters. The reality of these people crafted into the show are shown at their most exposed, even when that level of exposure is guarded cloistered and defended by abrasive outward personalities. Bailey’s ability to focus on the book and telling the story through these astonishingly well-crafted songs is remarkable. Her focus on the undercurrents and side plots of the overall show is as sharply honed as the main story and the juxtaposition of these story arcs run flawlessly parallel while simultaneously weaving their way in and out of the audience’s perception under her direction.

The ensemble is populated with voices the deliver bursts of powerful sound and energetic harmonies. Though the ensemble numbers are few, as the musical itself is similar to an American opera in the sense that there are four principles with two supporting voices and a smattering of featured cameos, the sound is heartfelt and tremendous when they are featured. “One Night in Bangkok” along with “Endgame” are two examples of such an infusion of sound enormity. Choreographer Cathy Oh should be noted for her work in both “One Night in Bangkok” both at the beginning of the number with the entrancing limb-illusion dance, and as the number progresses for the complexities of her use of chairs in the routine.

Chess has a smattering of cameo characters; the pawns of the musical if you will, whose sole functionality is to move the plot along. The performers in those roles craft an exquisite depth into these mechanical constructs, giving them human emotions and raw pathos that are worked seamlessly into their songs. Gregor (Rich Shegogue) has the distinguished honor of opening the show with “The Story of Chess.” This number sets the tone for the musical and Shegogue’s rich baritone-tenor mixed sound is perfectly suited for this opening; a lesson ingrained in the emotions of his voice. Returning later in the performance, Shegogue’s heart-melting rendition of “Father’s Lullaby” easily stirs a tear to the eye, the song sitting with comfortable ease in both his vocal and emotional wheelhouse.

Walter (Quinn McCord) and Molokov (Christopher Overly) are seedy sidekicks and might be labeled comic support if there was humor to be found among their characterizations. Both McCord and Overly bring strong vocal support to the roles as well as readily defined nuances of their acted scenes outside of the music. McCord dissects his rhythmic duet with Freddie, “Winning” with a practiced ease and settles casually into “Let’s Work Together” exchanging quips of recitatives with Overly in this duet.

While anything but minor, Svetlana (Nina Jankowicz) arrives on the scene with an ominous thunder that rolls silently up through her rigid physique. Jankowicz provides a buttery melting echo of morose decline for her portion of “You and I” where both vocal intent and technicality flourish in the moment. Her accent, thick and robust, carries well into both this number and “I Know Him so Well” a duet shared with Florence. Again with a mournful tone, this duet is well worth the wait of the show to hear such well-matched perfection as the two females blend together for the eleven o’clock tragically beautiful ballad.

The Arbiter (Garrett Matthews) is an attitude; a stoic human brick of defiant sarcasm and exacting ruthlessness that comes together all in one number. With a single look, which is truly more of a glare, Matthews sets his eyes to annihilate the reporters that approach him leading into the song. Providing a huge sound with a subtle sip of sass seething under the matter-of-fact exacting rage, Matthews delivers a chilling presence here. A ferocious and blinding flame of intent burns raw in his core, penetrating his ultimate belted sustain at the end of the song as well as the bulleted staccato patter throughout “Arbiter’s Song.”

With an arrogance that heralds his entrance, Freddie Trumper (Randall Dunkle) is easy to dislike as a character. At first Dunkle’s performance feels flat and disconnected, but much like the strategic game of chess, his performance is deceptive and not at all what it seems. Plotting against the audience maneuver by maneuver and song by song, Dunkle makes the character almost painstakingly static but the tactical forethought pays out tenfold when he reaches his own eleven o’clock number of “Pity the Child.” With an enormous sustain and vocal power that could shake the Russian space station out of orbit, the song crashed over the audience with immense force. Every withheld emotion of nostalgic regret and recollective remorse bursts wide from inside Dunkle’s character and spills out in a raw and unadulterated rendition of this song.

Remarkable performances do not stop at Dunkle’s deceptively well-played match between the two halves of Freddie’s character. Anatoly (Ward Ferguson) and Florence (Teresa Danskey) are the lead characters of the show. Ferguson and Danskey are astonishing both in character creation and vocal prowess; stunning the audience to applause and silence with their individual performances, but especially with the chemistry that grows quickly between them. “Terrance Duet” showcases that their voices belong together in song as her emotional clarity tangles gentle with his delicate baritone sounds. “You and I” and it’s “Reprise” are equally striking, though they hold very different emotional meanings, and again display how perfectly Ferguson reads and responds to Danskey’s voice and vice versa.

Delivering a robust and aurally fulfilling rendition of “Anthem” at the close of the first act, Ferguson achieves a wholly operatic sound that causes the heart to swell with pride even if he is singing for a nation not our own. The emotional honesty that is reconciled early on during “Where I Want to Be” is astonishing; his voice strategically laced with hints of otherwise guarded emotion, revealing his life’s discontentment one sustained phrase at a time.

Danskey is a powerhouse performer that floods each solo and song with vibrant emotions. Raw and exposed like the other emotional performances in the show, it is difficult to find praiseworthy words that do her singing justice. It is rare to have an individually so emotionally in tune with the character’s needs, stakes, and desperations; never once does Danskey call these into question or doubt. As if she has become the character and has poured her soul into it, numbers like “Heaven Help My Heart” and “Nobody’s Side” speak directly to the heart’s of the audience. An earnest sensation in the role, Teresa Danskey steals the show and lands it to well deserved thunderous applause by the time the finale lands.

Chess plays through May 30, 2015 at Kensington Arts Theatre located in the Kensington Town Hall— 3710 Mitchell Street in Kensington, MD. For tickets call the box office at (206) 888-6642 or purchase them online.