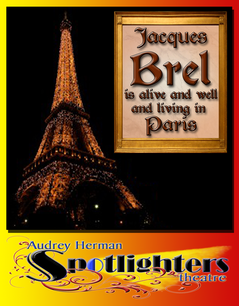 Bienvenue sur le carnaval! Where the broken sands of time and fairy floss floats o’er the fairgrounds of The Audrey Herman Spotlighters Theatre. You won’t recognize a single song in this flash of 21 vignettes, at least not by their lyrics, but the iconic melodies of Jacque Brell tinkle blissfully under each song inviting the audience into a cantering calliope of romanticism, cynicism, and jingly jaunts of whimsy. Directed by Timoth David Copney with Musical Direction by Michael Tan,