Lynn Nottage’s play, Intimate
Apparel, tells the story of one woman desperately reaching out for real,
unguarded, intimate human connection, and it is fitting that Silver Spring
Stage, with its intimate and engaging black box and overall style, should
select this piece to conclude its 2018-2019 season. Directed by SSS Board Chair
Seth Ghitelman, this emotion-driven production provided an entertaining and
thoughtful experience. 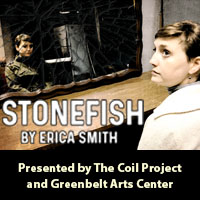 Stonefish is an original play by
Erica Smith and directed by David Dieudonne.
Without wishing to spoil, Stonefish
revolves around fraternal twins Mason and Dixon (both played by Amanda Zeitler)
their younger brother Lewis, (Ren Stone) their father Stan, (Sean Butler) and
their piano teacher, Christopher (Matt Baughman.)  The play itself deals heavily with grief and
trauma.

There is
little one can say about the plot without spoiling the thread of the story
except in that while it is a clever concept,

There is a song in The Last Five Years titled, “I Can Do Better Than That” and if The Montgomery Playhouse & Theatre @ CBT want to fill the seats, Producers David Jones and Elizabeth Weiss really need to do better. To ad lib a line from Mel Brooks, “What they did to Jason Robert Brown, Booth did to Lincoln.” When you put up a show with only two actors and music by JRB you need to make sure that your actors and Musical Director are up to the task.

You feel the feverish chill of something suspenseful about to happen. There is a prickle at the hairs on the back of your neck, a tingle that flickers up your spine, and the ever so sudden jolt of your entire body when you hear anything sounding remotely close to a gunshot. You’ve contracted a terminal case of Thrilleritus malignus! And your only hope for a cure is going to see Silver Spring Stage’s production of Ira Levin’s Deathtrap.