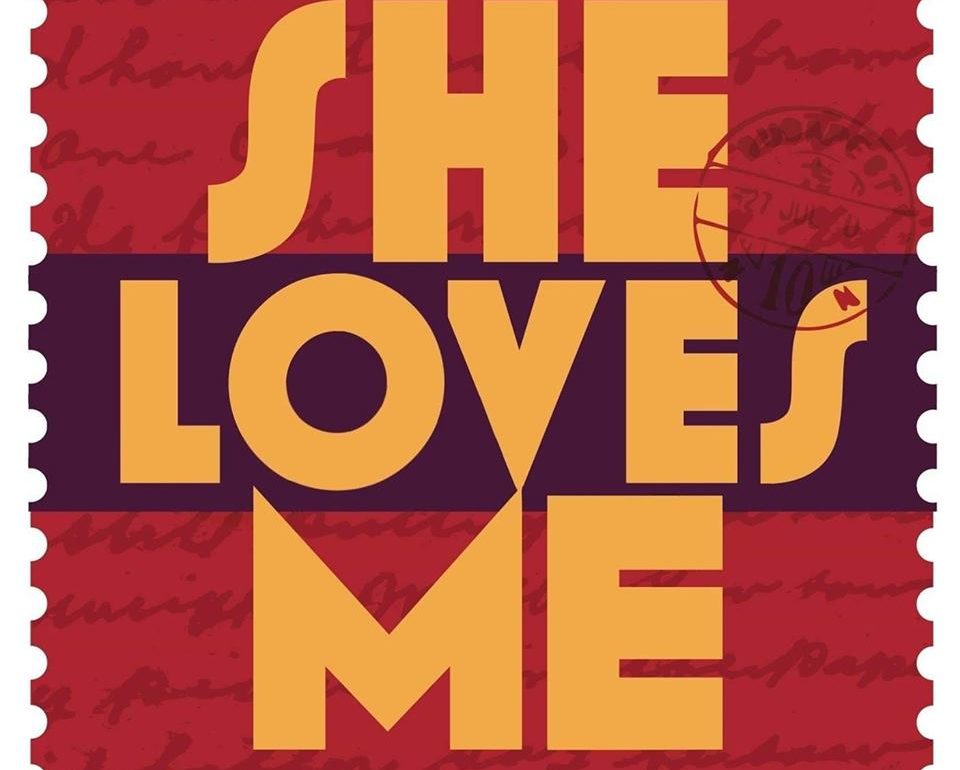 Thank you, Madam (and gents and everyone), do come again, do come again— to Silhouette Stages to see a rather invigorating production of She Loves Me, Directed by Stephan Foreman with Musical Direction by Andrew Zile. The dated and somewhat stale musical finds a vivacious new life under Foreman’s magical direction; his attention to detail, precision casting choices, and overall approach to the performance gives it a bubbly exuberance that makes for a thoroughly enjoyable evening of musical theatre (even if they are tricking you into your first Christmas show of the 2019 calendar season— in mid-October.)

Gorgeous does not be begin to accurately describe Stephen Foreman and Nicolas Carter’s set design. With a construction team a dozen and a half deep, Foreman and Carter have fabricated what is arguably one of the most striking, functional, and aesthetically pleasing sets to grace the Slayton House Stage in quite some time. And everything finds itself on this striking, functional, and aesthetically pleasing set bathed in shades of pink, compliments of Lighting Designers Atticus Cooper Boidy & Maggie Urban. Boidy and Urban delve into the notion of the Perfumery and delicately dip various scenes in soft mood lighting, like a visual perfume, if you will, scenting the stage with luminary accents that are perfectly balanced against the show’s sentiment.

The marvels of Foreman and Carter’s stage— everything from the hinged pull-open interior of Maraczek’s with its whimsically curved walls (that appear to be the hybrid lovechild of the romanticized ideal of Budapest, Hungry circa 1934 and a Dr. Seuss encounter) to the slide-in Broadway-style rig for the back ribboning room of the store— is polished with a strong headnote of professionalism. But the wonders don’t stop there. Properties Mistress Ande Kolp has created a magical enchantment all her own. Designing a rather fancy logo for the Maraczek brand, Kolp has stamped it on everything— from wooden badges that the sales clerks wear, to the bottle labels of all the various productions, and more. Seeing shelves filled with bottles and boxes and tubes of things that look like they come from inside this whimsical world of fantastical fiction is a bonus delight for anyone watching the show.

Deana Cruz-Conner completes the look of wonderment in this production with her sartorial selections, with nearly all the costumes befitting of the time and social standing of the characters. Ironically enough, its Cruz-Conner’s costumes on the female ensemble that really pop, particularly on Customers #1, #2, #3, and #4 (played by Maggie Mellott, Sarah Kalafos— with the voice of a cherubim— Ande Kolp, and Twila Marie Duarte.) These outlandish outfits showcase these women’s social standing; they are clearly of high societal circles in Budapest and shopping at Maraczek’s is a fine luxury in which they indulge often.

The show’s one slight, which is forgivable considering how many other wonders they achieve successfully, is the somewhat slapdash choreography conceived and executed during Scene 4: The Café Imperiale. There is a series of dances that occurs therein, which are somewhat haphazard in what does not feel to be an intentional sloppy vein. But the rest of the show is so dazzling, you’ll readily forget the various patrons, and busboys slipping and sliding about during that Act I Finale series.

What you will not forget is Christopher Kabara and his show-stealing performance as the Headwaiter in that scene. With a forced, syrupy voice, Kabara presents the Headwaiter like a shiny, enticing candy-wrapper draped elegantly around a bomb about to explode. His high-strung, over-the-top antics and shenanigans are a scream; you won’t be able to not laugh at all the chaos and calamity that stirs up around his performance in this production. The rage-tremble and psychotic implosion painted across his face only enhance his performance of “A Romantic Atmosphere”, really driving the undeniable humor of his character and this scene, which he dominates, home to the audience. Maggie Mellott and Logan Snyder (as the two busboys) serve to assist and encourage the nonsense of all the incidences inside The Café Imperiale, giving Kabara the boost he needs to win the “show-stealing-ham-n-cheese” award of the production.

Simple but effective in his shop-owning role, Matt Scheer finds an oddly comforting humanity in Mr. Maraczek, particularly during his fond reminiscence of dancing with his wife during the number, “Days Gone By.” Watching Scheer blossom from this someone stuffy but kind store owner into a rage-driven madman, and ultimately denouement into a humble but happy character, is rather impressive as Scheer’s Mr. Maraczek serves as a tertiary character in regards to physical on-stage time. There is a dry humor which Scheer imbues to Mr. Maraczek that helps his character feel relatable rather than just a stock stereotype.

Director Stephen Foreman has done a fine job of hand-picking his cast and pushing the pacing of the production, ensuring that each scene change is swift, all of the action of these scenes vibrates with vision, and that everyone fits the 1934 locale in which he’s chosen to keep the show set. (With the exception of a few narratively spoken hiccups on the part of Ilona Ritter, who just can’t seem to shake her 2019-modernity when delivering spoken lines, and the slightly modern singing sound of young Arpad when he gets his big breakout number; both of these little incongruities are noticeable but hardly distracting from the grandeur and overall success of the show.)

Musically the production soars, wafting up out over the stage and into the audience like a fine perfume. Andrew Zile has created strong harmonic blends, particularly during all of the recurring “Thank You, Madam” numbers. What Zile does best is keep the dervish of sound during “A Christmas Carol/Twelve Days to Christmas” clean, clear, and audibly intelligible. A chaotic cluster of Carolers (Christopher Kabara, Ande Kolp, Maggie Mellott, and Logan Snyder), Customers (everyone else) and Clerks zip frantically about the shop with the tempo perpetually increasing as the song carries on; Zile ensures articulation, clean sounds, and strong blends as this madness descends to its finale.

Bouncing off the walls with youthful exuberance, Justin Diaz’ Arpad Laszlo is like a sugar rush from inside a bottle of very fine scented oil. Filled with tenacity when it comes to his dream of someday being more than just a delivery boy for the Perfumery, of someday rising to the ranks of salesclerk within the walls of Maraczek’s, Diaz has all the energy of a young boy eager to advance in the world. His breakout number, despite having hints of modern singing sound, is enthusiastic beyond compare. “Try Me” is such an excited number delivered by Diaz that when he leaps up onto Maraczek’s bed, you half expect him to be on lifts and drift up into the fly-space. Overflowing with plucky punch, Diaz’ Arpad becomes a fun and loveable character right from the moment you meet him, but one of his best moments on stage is his perfectly timed comic fall when he’s caught listening outside of Mr. Maraczek’s door just after “Try Me.”

Seedy and seedy, Steven Kodaly (Kevin James Logan) slathers on the ruffian’s charm from the moment we’re introduced to him. In an age appropriate role, with all of the rigid strictures of a womanizing grass-snake, Logan struts about like cock of the walk when it comes to this part. His smarmy charm that oozes out during “Ilona” a number that is grossly crooned at Ilona Ritter (Angelica Peaco.) Logan makes it easy for the audience to dislike him, leaving a foul taste in everyone’s mouth especially once he starts belting out his ‘good riddance’ number, “Grand Knowing You.”

Peaco, as the stalwart Ilona Ritter, has a keen sense of comic timing, and a crystalline voice that provides a great deal of vocal compliments to all of her various duets. You’ll readily forgive her modern speaking voice because her singing voice is so saccharine and pretty. Mostly paired off in duets with Amalia Balash, Peaco’s Ilona has an even balance of sass and informative intuition behind her characterization. During her solo, “I Resolve,” the audience gets a firm sense of her character and her vocal capabilities; her defining moment is really best witnessed during her exit of the final scene with a plucky delivery of a comically intoned line.

Honest, earnest, and too quirky-cute for words, Michael Tan tackles the character of Ladislov Sipos with stellar vigor. A warm buttery tone informs all of his moments of song, smooth and clear. “Perspective” is his prime featured number and he delivers it brilliantly. But aside from his singing, Tan really knits into the comic nuance of the character. His comic timing is second to none in this production, particularly when it comes to his zippy entrances and exits from situations where his character would rather not be. With animated facial expressions and body language displays that fully express the comedy of his self-depreciating character, Tan is a supreme comic feature in this production.

Before “You’ve Got Mail” (and everything that came after) there was Georg Nowack (Brad Davis) and Amalia Balash (Kelly Rardon.) The pair are a diabolically invested duo in this clashing romantic pairing. Rardon and Davis carry all of the sugary spite, the bitter back-n-forths, and the molasses-progression of fondness that is needed to successfully turn the relationship between Amalia and Georg into a successful romantic comedy. Their biting exchanges— especially as they come to an explosive head— during the scene in The Café Imperiale feel authentic and really drive the tension of their relationship, creating the perfect springboard for the chaos that unfolds in the second act. Though rarely paired in duet (because of the nature of the libretto) their tones marry divinely during “Where’s My Shoe?”

Kelly Rardon, as Amalia Balash, is a heady perfume, a bit like that oddly gifted scent that you find tucked away in some old chest of drawers you’d all but forgotten about. She’s mysterious, she’s funny, she’s comforting, and all of these qualities endear the audience to Amalia Balash all the more. Her cheeky insistence during “No More Candy” is as enjoyable as her revelation during “Vanilla Ice Cream” (arguably the most absurd song in the show and yet you can’t help but love it once Rardon gets behind it.) Embracing all of the things that makes the character standout, Rardon handles the 1930’s patois with effortless ease and melts into song after song with a glorious sound, particularly her solo “Dear Friend.”

Sprightly and effortlessly loveable, Brad Davis as Georg Novack entices the audience to all be in love with ‘Dear Friend.’ With a warm and robust voice that is perfectly suited for the role and all of the delicate charm and gentle charisma of a romcom leading male protagonist, Davis is both delightful and congenial in the role of Georg. His character work is superb and this grounds the audience in his court, which is critical since he doesn’t receive his first solo singing opportunity until the top of the third scene (essentially midway through the first act), and even then, “Tonight at Eight” is just a brilliantly articulated patter-ballad that doesn’t show off the full bench of his vocal talents. Davis bursts with feelings during the titular number and is so merry on that lamppost that he and the lamppost might take off and float during “She Loves Me.” Truly a fine addition to any cast, Davis makes this show feel complete.

So as the clerks at Maraczek’s say— do come again, do— see She Loves Me at Silhouette Stages before the Perfumery closes its doors for Christmas. (In October.)

She Loves Me plays through October 27, 2019 at Silhouette Stages performing at Slayton House Theatre in Wilde Lake Village Center— 10400 Cross Fox Lane, in Columbia, MD. For tickets, call the box office at (410) 637-5289, or purchase them online.