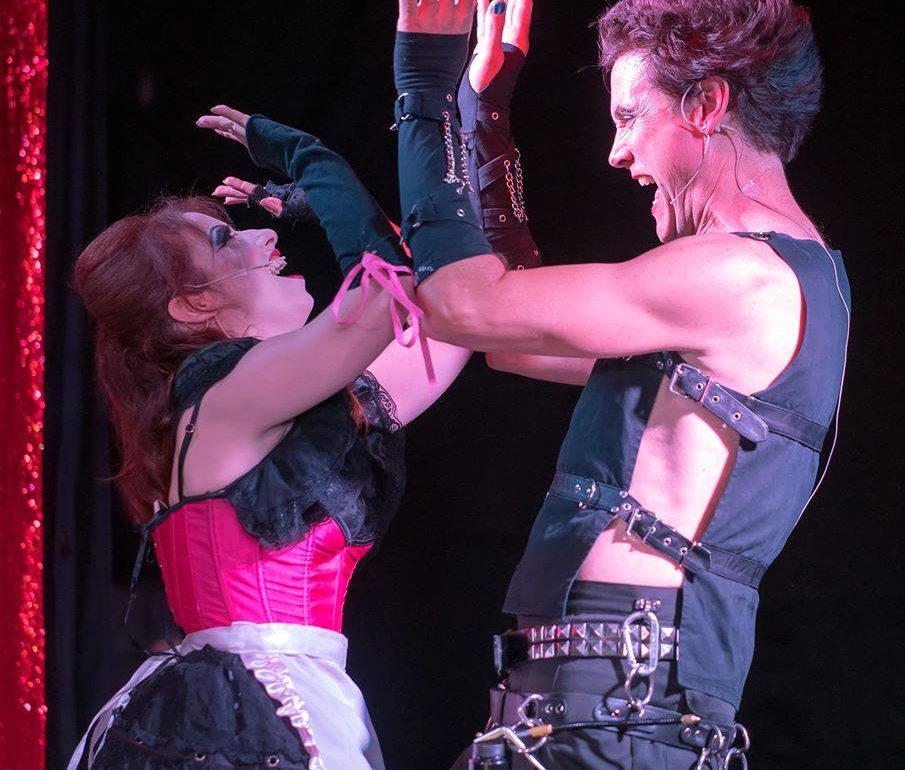 There’s a liiiiiiiight! Over at the Taylor Street Plaaaace! There’s a liiiiiiiii— iiiiiiii— iiiiiiight! Burning in their fireplace, there’s a light— in the darkness of the October-November calendar and it is blazing rainbows, folks. That’s right, as only Wolf Pack Theatre Company can do, they’ve but a kooky and queer-positive spin on an already zany cult classic. Are you just dying with antici— PATION to know what we’re talking about? Cause it’s just a jump to the left (of Bladensburg) and then a step to the right (of DC.) Put your hands on your hips— and HOLD ON TIGHT because Wolf Pack Theatre Company is bringing you their very own Rocky Horror Show. Directed by William Leary with Musical Direction by Kenneth Lautz, and Choreography by Alex Sands, it’s all the memorable and iconic elements of Rocky Horror with clever framework and pro-rainbow pride for miles.

Sticking a live pit at the back of the stage, which pelvically thrusts its way out into the house— it’ll drive you insa—aaay—aaane— provides ample sound to back these talented performers. Technical Hotshot and Special Effects Maestro Stephen Beitzell sets up the microphone balance so that Pit Conductor Jennifer Quilty can concentrate on clean sounds from her musicians. The whole thing sounds rather impressive in so far as balance goes; the pit blends with the vocalists and vice versa. And when the group songs come out, the roar loudly but not harshly. Beitzell works the lighting in trippy and exhilarating fashion; let’s not go…spoiling…too much by giving away in too great a detail what exactly he’s cooking up in the technical lighting lab…but it can be said that this is fairly impressive as far as Wolf Pack lighting designs go.

In the present day a lot of the questionable sexual acts in this production border on uncomfortable, and even though Rocky Horror comes from a different time (and planet…and people don’t quite understand that you just can’t hold something from yesterday by today’s standards and expect it to still shake out as PC, clean, and acceptable) Intimacy Consultant and coordinator Stephanie Davis has done a remarkable job of informing these scenes with an appropriate balance of raunchy dubious doubt and consent. There’s no getting around how the libretto plays out (and watering it down or changing it begs for you to simply do a different show if you’re not comfortable) but Davis makes it fit within the construct of the show.

These intimate moments are often framed by Director William Leary’s clever framework. Everyone is hyper aware of what’s happening. Even though the “show” itself is exactly what the opening number describes— a “Science Fiction, Double Feature”— as we are both introduced to the performance and led out of it with the Usherette (Jessica Cooperstock) both setting up for and then cleaning up after the movie theatre crowd. Little frameups like this give this oddly cult-classic show context. Having Brad witness Janet with Rocky and respond in the background or the ending— where Brad and Janet do a little more than wander helplessly lost and apart from one another in the ether— all cement Leary’s insightful forethought and understanding of an actual story. (Yes, yes, Rocky Horror Show is all fun and games and silly nonsense, but is it though?) This concept applies to characters as well. Our Narrator (the incomparably creepy and delightfully aloof David Weinraub) has an ongoing skeevy relationship with Cooperstock’s Usherette, who becomes a comic accessory to his storytelling as they lounge together on the couch.

Stylistically, Leary has done the show correctly. With just two Phantoms (Rachel Sharp and Jamie Brill) there is little to distract the audience from all that’s happening. Leary works with Rebecca Overly for the show’s esthetical aesthetic, popping rainbows into the makeup and sartorial selection every chance they get. It sends an empowering and positive pro-LGBT+ message that envelops the production the way the moon-drenched shorelines of Transylvania envelop Magenta’s mind and yearning. Frank ‘N’ Furter’s rainbow-glow wing cape alone is breath-taking, not to mention all of the other fabulous outfits featured throughout; even the “square” costumes first seen on Janet and Brad fit the bill for this iconic and yet unique production of RHS.

McKenna Gervase Kelly is flipping everyone’s lid with her dual portrayal of Eddie and Dr. Scott. While the casting duplication isn’t an uncommon choice (often are the two character played by the same actor) it is less often that they’re both played by a woman. Kelly has a ripe accent as Doctor Scott and the larger than life rock-n-roll personality when Eddie rips onto the scene for “Hot Patootie.” Of course herein lies some of the kinkier hilarity as Frank ‘N’ Furter doesn’t chase after Kelly’s Eddie with a chainsaw, but rather a double-edged, double-long…erm…toy. (Probably not a kids show, kids!)

Miranda Austin Tharp deserves a world of praise for her intense tap routine during “Time Warp.” Everyone knows that Columbia gets a tap break. It’s usually a brief one. Tharp makes a full-on scene demanding that she be the focus in that moment, and the she wows the audience with her extended tap-break. As a squeaky obnoxious character who never quite fit inside the Frank ‘N’ Furter house of questionable individuals, Tharp blends right in with all of these oddball creatures and weirdos, giving Columbia some hidden depth that most don’t expect from the character.

Brad Majors (Zach Walsh) and Janet Weiss (Liz Colandene) are your stereotypical squares when first introduced. Walsh has a strong and bold singing sound which really compliments the number “Damn It, Janet!” Of course that ridiculous number, “Once In a While” (which was cut from the film for a reason!) actually sounds halfway decent when Walsh tackles it. It’s a terrible number, but Walsh makes it palatable. Colandene doesn’t bring Janet Weiss to life with the peppy, perky soprano sound that often accompanies the vapid virgin, but rather a much more guttural sound, which is delightfully appropriate for “Touch-A Touch-A Touch Me.” She’s growling her sexual frustrations and needs all through this number and it really hones in on how infuriating living that kind of preserved pristine sexual life can be.

The gun show is ON when it comes to Alexander Bruce Gordon’s Rocky. He’s packing weapons of mass deliciousness when it comes to thrusting those muscles all over that stage. And holy hell— that spread-eagle-side-split jump is enough to stop your heart. Booked for the looks and backing it up with a beautiful voice and talented character responses, Gordon is indeed a sensation as Frank’s “creation.” When he’s fleeing all through the house during “I Can Make You a Man” you won’t be able to concentrate on anything else; his movements are so articulate and watch his facial expressions too. “The Sword of Damocles” seems to be appropriated by the entire cast here, but maybe it’s always been written that way? Would have loved to have heard a more solo rendition from Gordon, given his superb voice.

Riff Raff (Jon Townson) and Magenta (Melanie Kurstin) are two creepers of a kind unlike any Riff & Magenta you may have experienced before. There’s something “Doctor-Horrible-adjacent” going on in Townson’s incarnation of Riff Raff whilst Kurstin is channeling a hybrid of Ursula and Cruella DeVille when it comes to her character’s makeup. The brilliance of these two performers lies not only in their stellar singing voices (both of which lead “Time Warp” and “Transit Beam”, the latter being vocally blasted with thematic perfection), their outrageous interactions with others and one another, but truly in their individuality. They aren’t trying to channel any particular Riff Raff or Magenta that came before them, they aren’t trying to be the stereotypes of these characters; they simply exist as their own uniquely electrifying creation whilst still comfortably wearing the expectations of the audience. You’re fully invested in Townson’s “madness” when he slinks down the stage thrust at the top of Time Warp and every time you catch Kurstin skulking about, with her slight vocal affectation you get a shiver! They’re quite the pair and honest perfect additions to the cast.

Rocking his own true best life when it comes to Frank ‘N’ Furter, Kenneth Lautz is not Tim Curry, he’s not Tom Hewitt or any other “iconic” master of the house. Kenneth Lautz is his own phenomenal creation as Frank ‘N’ Furter. A Frank ‘N’ Queen for 2019, Lautz has got pipes, OWNS that stage with those serious killer stilettos, and is bursting with a revolutionary roar that rings through to a new era. Strutting elegantly like he owns the place, Lautz is possessed of that elusive ingredient, that spark of confidence that makes him his own unique Frank. So vocally vivacious, you’ll give yourself over to pleasure just listening to Lautz’ rendering of “Don’t Dream It— Be It”; he’s so enticing in that number, and really ever number, that you’ll wish he’s warped you with his sonic transducer and made you a part of his floor show. Truly a sensation, Kenneth Lautz has reinvented Frank ‘N’ Furter in a way that works, still maintaining the integrity of the show but embracing a new generation while doing so.

So as Frank says, “don’t dream it— be it.” Be in the house, be on the stage (especially if you’re an RHS virgin!) and be part of this revolutionary rainbow resurgence in Wolf Pack Theatre Company’s Rocky Horror Show this Halloween.

Rocky Horror Show plays through November 16, 2019 with Wolf Pack Theatre Company at The Taylor Street Theater— 3601 Taylor Street in Brentwood, MD. Tickets are available at the door or in advance online.