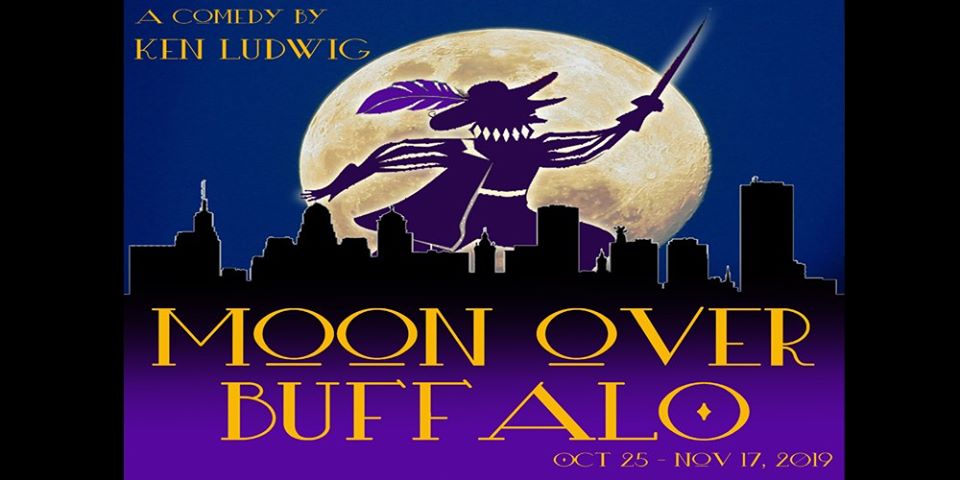 Ken Ludwig’sMoon Over Buffalo is the second installment from Spotlighters Theatre’s 58th season. If you are looking for some gut chuckling, tears down your cheeks humor, then you won’t want to miss this show. Director Brandon Richards has mentored his cast through door slamming, side splitting hysterics that will keep you laughing all the way home.

The first thing you notice upon entering the theatre is the very cozy and well-designed set of Sam Martin. Martin gives the feel of a theatre within a theatre. He successfully transports you from Spotlighters main stage to backstage of a repertory theatre in Buffalo. Costume Designer Tyler Omundsen keeps up the charade with period appropriate costumes for his actors whether they were on stage or in the green room.

Mark Wallace (Paul), John Dignam (Richard Maynard) and Jessie Duggan (Eileen) were a delight and when each gets their special moment to shine, shine they do. Wallace will have you laughing with his physical comedy while Dignam and Duggan keep you smiling with one-liners.

If ever an engaged couple seemed doomed from the beginning it is Lindsey Schrott (Rosalind) and Steven East (Howard). Unlike the characters that they play, Schrott and Howard work well together. Whether playing coy to daddy or keeping Howard in his place Schrott is fun to watch. East is a nervous bundle of energy filled with anxiety and delivers an absolutely pleasurable performance.

Carol Conley Evans (Ethel) knows how to make the most of her time on stage. All eyes were glued to her and the audience awaited her next line with bated breath. She was feisty but not over the top, which played very well. The range of emotion and energy Melanie Bishop (Charlotte Hay) put into her role did not go unnoticed and is applauded. Bishop plays up against every other character in the play and her interaction with each requires a different skill set. Her ability to switch personas and to deliver a spot-on performance is a gift.

If Phil Gallagher (George Hay) does not lose five pounds a night, I’d be surprised. Gallagher is like a life size Energizer Bunny. From the time he enters swinging a sword, to final curtain he is full throttle. Even his drunk scenes are full of physical comedy and non-stop movement. Over the course of two hours Gallagher has a fencing battle with his wife, wrestles his wife’s suitor, and falls into an orchestra pit. As if that were not enough, aside from playing George, he must speak in a French accent, play Cyrano de Bergerac and Elyot from Private Lives. Gallagher puts on a flawless, high energy, stunning performance that simply can’t be missed.

If you are a fan of theatre, a performer, a patron, or even one of those backstage people, you are going to want to shuffle off to Spotlighters and catch this brilliant cast in Moon Over Buffalo. “Theater going is a communal act, movie going a solitary one.” – Robert Brustein

Moon Over Buffalo plays through November 17, 2019 at The Audrey Herman Spotlighters Theatre— 817 St. Paul Street in the historic Mount Vernon neighborhood of Baltimore City in Maryland. For tickets call the box office at (410) 752-1225 or purchase them online.