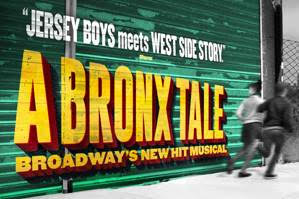 As a performance piece, A Bronx Tale has had maybe an even more colorful history than the events that inspired it. Back in the late 80’s, Calogero Lorenzo “Chazz” Palminteri, a young, struggling actor with big dreams met with a series of closed doors. Intent on making his own luck, he realized that as a child he had a unique experience, and developed a one-man show based on those events. The result was the critically acclaimed 1989 off-Broadway hit A Bronx Tale, wherein he vividly recreated the colorful world of his 50’s/60’s youth and all the even more colorful characters that inhabited it under the aid of veteran four-time Tony Award-winning director Jerry Zaks. Robert DeNiro saw the run and bought the rights to make and direct the 1993 movie version of the piece, again written by Palminteri and starring the two as his dad and the gangster respectively. Broadway eventually called and resurrected Palminteri’s solo showcase for a limited run and national tour in 2007. Then two years ago, the show resurfaced coming full circle in an all-out Broadway musical, again written by Palminteri and directed by both DeNiro and Zaks, with the addition of a superior score by Alan Menken and Glenn Slater.

The Broadway run of A Bronx Tale was a sleeper hit of the season, critically acclaimed and loved by those who experienced it. However, it had the single misfortune of opening first in the biggest and strongest season in decades, and within weeks became buried under theatrical titans like youth anthem Dear Even Hansen, Josh Groban’s Broadway debut in Natasha, Pierre, & The Great Comet of 1812, sentimental 9/11 aftermath Come From Away, and Bette Midler’s steamrolling return in Hello, Dolly. Garnering several Tony nominations but winning none, this quiet gem plugged on solidly for two seasons before packing up and embarking on a national tour, with the entire production team intact, currently appearing at the National Theatre in DC.

Aptly described as “Jersey Boys meets West Side Story”, the basic conceit is based on an incident when Palminteri was 9 and witnessed a mob murder in his neighborhood. Knowing better than to talk, the mob boss involved showed his gratitude by taking young Calogero Palminteri under his wing to protect and educate him, much to the chagrin of his father, causing friction while inspiring many life lessons over the course of the next decade.

One of the recurring themes of the piece is Lorenzo’s creed to his young son, “The saddest thing in life is wasted potential.” Suffice it to say that this touring production buys heartily into that. The pedigree alone is full of heavy hitters at the top of their games the likes of which even the Bronx Bombers haven’t seen. From the top down, Chazz Palminteri (The Usual Suspects, Bullets Over Broadway) has created a book full of humor and heart from his opus, lifting the best of the narratives from his solo piece and placing them into the mouths of his stand-in Calogero and company. Directors Robert DeNiro (Academy Award Winner for The Godfather, Part Two and Raging Bull) and Jerry Zacks (Hello, Dolly, Sister Act, and a lifetime of others) have combined their respective understandings of the piece to keep a tight pace, big laughs, and preserve all the memorable characterizations in Palminteri’s story-telling. The most inspired addition to the team is Alan Menken (Little Shop of Horrors, The Little Mermaid, Sister Act), sitting squarely in his musical wheelhouse as the undisputed king of recreating 50s/60s pop, with his undisputable best score since Disney’s Hercules. Paired with most recent lyricist partner Glenn Slater (Sister Act, Galavant, Tangled), the new team continue to inspire the best in each other.

The cast, featuring eleven vets of the Broadway show, are equally inspired to please and succeed. Joey Barreiro (national tour of Newsies), exuding innate charm and heartthrob good looks, is a solid center as our amiable narrator Calogero Anero (or “C”, as Sonny dubs him). Understudy Joey Calveri (Rock of Ages, Wonderland) performed the critical role of mobster Sonny for this reviewed performance, but one would never suspect he wasn’t the permanent lead. Simultaneously smooth, funny, and terrifying, Calveri has a tight bond with both Barreiro and scene-stealing youngster Frankie Leoni as his 9-year-old counterpart (he’s particularly funny teaching the boy how to shoot craps in the raucous, rocking “Roll ‘Em.”)

Young Leoni’s talent belies his age, as he not only goes squarely toe to toe with Calveri in their comic scenes, but Menken has entrusted him with the biggest production number of the show, “I Like It”, and young Leoni rises to swing with the big boys and carries it off. Original Broadway star Richard H. Blake (The Wedding Singer, Legally Blonde) is the beating heart of the show, reprising his role as Colagero’s father Lorenzo. Blake’s strong, stalwart presence transforms a story about mob murders, racial tensions, and civic unrest into a heartwarming lesson of loyalty, family, and love. He is at his most moving while fighting for his son in his first act closing number, “These Streets.”

Like most Mafia stories, this is a guy tale told by guys about guys, but the ladies in the lesser parts also leave their mark on Calogero’s life. Brianna-Marie Bell is sweet and unassuming as Jane, an African-American beauty from school who catches Calogero’s eye at an inopportune time in American history. She and Barreiro are endearing in their duets, the coy, flirtatious “Out of My Head” and the more worldly “In a World Like This.” Michelle Aravena is warm and sturdy as Colagero’s mother Rosina. While confined to the background as women were then for most of the show, she shines in her eleven o’clock reprise of her husband’s theme, “Look to Your Heart”, opening her son’s eyes to the sacrifices his father made for him.

The entire ensemble is an impressive compilation of exceptional performers who makeup all the other denizens of Belmont Avenue—Sonny’s colorful entourage of comic heavies, C’s doowop boys who comprise his own makeshift gang, the fiery Italian girls they all crush over—as well as Jane’s brother and crew down on her block in the more aware-of-the-times Webster Avenue. All vocally powerful, flashy dancers, and competent comedians, they instill Palminteri’s words and Menken’s music with a vibrant energy. From the moment they literally jump onto the stage (Sergio Trujillo’s thrilling choreography starts off impressive and varies from fun to phenomenal) for the opening of “Belmont Avenue” till they bring the musical to its more understanding conclusion, they are all a blast to watch.

But the unsung star of this production is composer Alan Menken (thoroughly robbed of a Tony nomination). Back where he belongs at the top of his game with a killer score that salutes the best of the musical styles of the period, he takes his cues from the musical themes that Palminteri so clearly delineated in his original solo piece. He gets the show off to a rollicking good start with the rock and roll doo wop “Belmont Avenue”, blends in some Sinatra-like gangland crooning for Sonny in “Nicky Machiavelli” and “One of the Great Ones”, then eases into some early Motown as times change. The Calogero/Jane duets have a young Marvin Gaye/Tammy Tyrrell sweetness to them, and he makes great uses of all his reprises, such as contrasting Calogero and the neighborhood’s first act opener “Belmont Avenue” with Jane and her friends’ more playful and soulful second act opening reprise of “Webster Avenue”, or Calogero’s boys’ doo wop doofus version of “Ain’t It The Truth” with Jane’s brother’s edgier funk and jive reprise. It’s nice to have Menken, who Disney bought for a solid 20 years (where he basically ruled the Best Song category at the Oscars for the first decade of that), back to his roots where he first received acclaim with the superior 60s sounds of Little Shop of Horrors. And this latest fast and fun score gives choreographer Trujillo and music director Ron Melrose all the color and texture they need to do their work painting in all the visual and aural palettes the score inspires. Welcome back to Broadway, Mr. Menken.

So yes, the saddest thing in life may be wasted potential, but that is not an issue at all here. Everyone involved reaches and accomplishes stellar results. But perhaps the second saddest thing would be to miss this first-rate touring production of a show that seriously deserved so much more attention than it received in New York. To borrow a phrase from Sonny, this show is one of the great ones. You just never heard it. Now you’ve been advised. Treat yourself and spend a couple hours on Belmont Avenue at the National Theatre for one short week only.

Opening Night Bonus: When Richard H. Blake took stage after curtain call, the audience expected the annual Equity Fights AIDS speech. Instead they were introduced to a surprise appearance from Chazz Palminteri himself, who thanked the audience, praised the accomplished cast, and gave thanks to the real Lorenzo and Rosina Palminteri for their inspiration, and the real Sonny for providing a life of unique experience. How appropriate and moving, a show that started 30 years ago with one man, to the amazing fleshed-out musical version it evolved into, returned back to the one man who lived and conceived it all. His final words were an invitation to realize the potential we all have inside. A great ending to a great show.

Finding Neverland at The National Theatre

Beautiful at The National Theatre