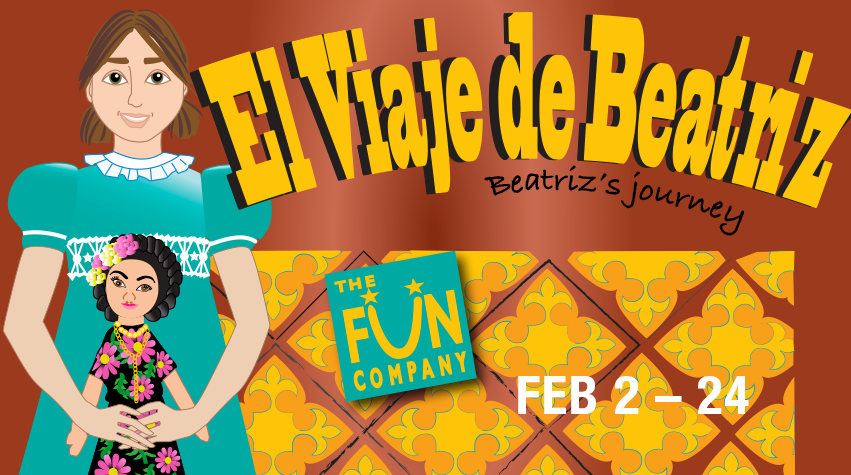 You may not understand every word, but if you listen deeply, you will understand what they’re trying to see. This is a critical component to the extraordinary and brilliant piece of children’s theatre being performed on the Maryland Ensemble Theatre’s FUN Company stage this winter. El Viaje de Beatriz, written by Andrea Moon, and Directed by Daniel Valentin-Morales, is a bilingual fairytale about little Beatriz, a young girl who is struggling with the death of her grandmother. A heartwarming, teaching tale that exposes younger audiences to both the concept and coping mechanisms of anger and grief as a result of losing a loved one, El Viaje de Beatriz has a loud and clear message to spread which is extraordinary for young audiences and a profound reminder for audiences young at heart.

With a whimsical mysticism, Matt Vance’s set transports the audience from downtown historic Frederick, Maryland to a little city village in Mexico. The way the panels slide in and out to transition the scenic location from inside Beatriz’ bedroom to inside her dreamland fantasy is impressive; Vance’s scenery moves with fluid ease, creating professional caliber children’s theatre that captures the attention of the audience readily. Accenting and assisting Vance’s set is Lighting Designer Doug Grove, Costume Designer Stephanie Hyder, and Sound Designer Lauren Johnson. All of the shows creative elements— from the elaborately lavish costumes featured on the King and Queen to the eerie and quixotic shadowy illumination featured during the tree scene to the perfect shattering glass sound effect every time a promise is broken— are perfect for the narrative, enhancing the production whilst still being amusing for younger audiences. Props are owed to Properties Mistress Emily Loecken for all of her fine sorcery featured in this production. Between the “promises” in the promise-keeper’s suitcase to the enormous staff-scepter-wands wielded by the King and Queen, there is so much imagination contained within these tiny miracles that they deserve a series of praise all their own.

Director Daniel Valentin-Morales does an extraordinary job with the show’s blocking, pacing, and overall flow. The piece moves— with the aid of sound and light— from one strange moment in time and space to the next, while still making sense. Beatriz (Jazmine Mangrum) encounters all sorts of mythical creatures and individuals— from the spooky, mysterious trees to the gibbering fictitious flower-fae-folk and then some— and although you can’t always understand what they are saying (just like many members of the audience may not understand the English or Spanish words being spoken at all times) their actions make the story’s action and advancement crystal clear. There is an overarching lesson of learning to listen in the play and Valentin-Morales hones in on that carefully, especially when Beatriz is learning to cope with her anger. The blocking is smooth but fun, each character has a unique movement and a unique series of engaging interactions with Beatriz (and often times others) that helps everyone understand what’s happening on stage no matter what language they speak.

Ivan Diaz and Lia Seltzer, playing the King and Queen, are masters of the slapstick and physical comedy shtick. Their characters (in the royalty scene as everyone in the show is doubled, tripled, and quadrupled up except for Beatriz) are extremely animated both in their physical bodies and in their facial expressions. The King and Queen represent a huge quarrel, and a sort of final lesson for Beatriz and these two actors are perfect matches for that entire encounter. Najee Banks, whose most memorable character is Mortimer the Promise Keeper will stick with you long after the show concludes because of his vocal styling and physical affectations. Spouting some profound, albeit cluttered, pearls of wisdom, Banks’ Promise-Keeper character is one of the most intriguing and fascinating in the bunch. Banks also plays Derecha alongside Izquierda (Prince Mills) and Avanzado (Aubrie Gadra), which serves as yet another wonderful learning moment for both Beatriz and the audience as these three characters— the Spanish equivalent of right, left, and forward— try to move in their respective directions at once whilst being attached to one another. And Jazmin Mangrum does a wonderful job of channeling all of the nuances that a young child experiences when frustrated, angry, and sad, into a believable fashion that suits both her character and the narrative tale.

It is a heartfelt, learning experience that is filled with fun but also with valuable nuggets of knowledge that are wonderful for kids and for adults who maybe forget such important things. Every word will not be understood (not even those zany gibber-jabber creatures know what they’re saying!) but if you listen, you’ll find all the heart and love and wonder of El Viaje de Beatriz that the MET FUN Company has to offer this winter.

To read the interview with Director Daniel Valentin-Morales, click here.

Review: The Cat in the Hat at MET’s Fun Company