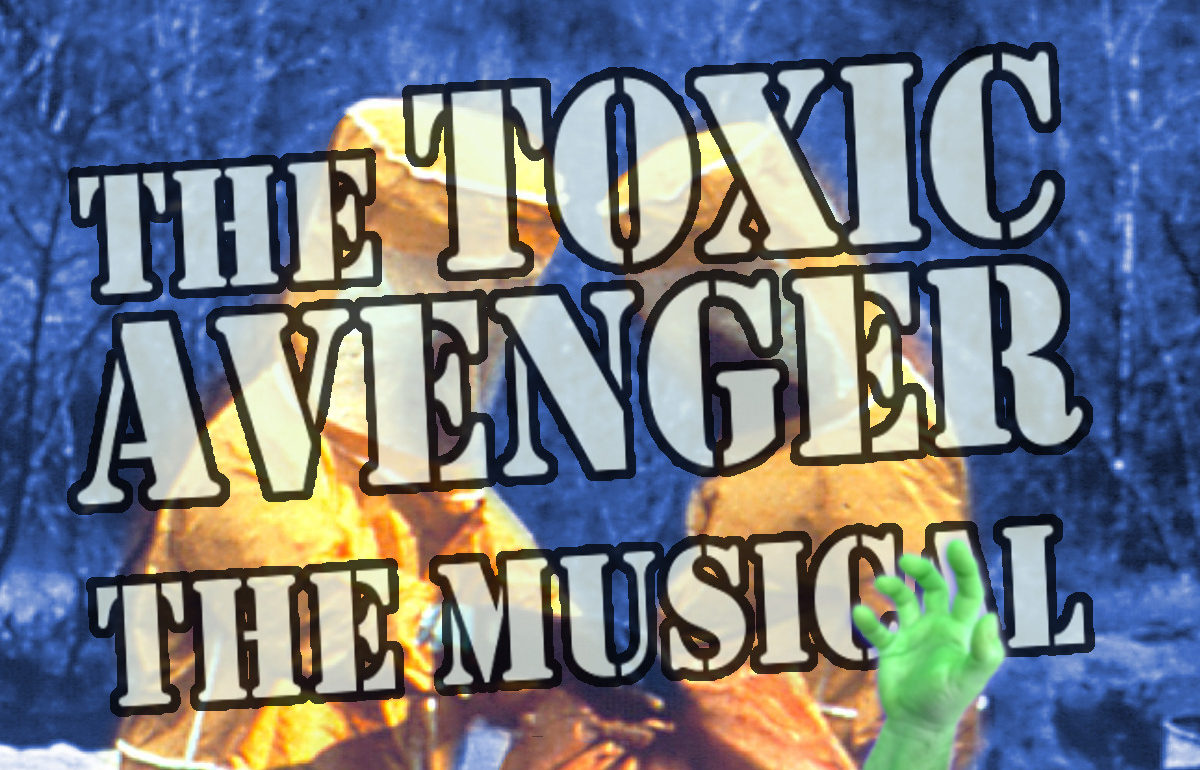 The Toxic Avenger, directed by Jeffery Lesniak, is a musical based on the movie of the same name and both a playful parody of the superhero genre and of conventional musical theatre sensibilities.  The plot revolves around a toxic dump of a fictional New Jersey town called Tromaville and its dark knight—Melvin Ferd the Third, a sweet, stereotypical nerd with a crush on his pretty (and blind—beware there are a lot of blind jokes that get old quickly) librarian friend Sarah and deep-seated convictions about cleaning up the town and calling out the corrupt mayor Babs Belgoody.  When the mayor becomes aware of his sociopolitical intentions, she hires goons to drop Melvin into toxic waste and from there he becomes…wait for it…the Toxic Avenger: a disfigured, green vigilante hell-bent on vengeance and justice.  And wooing Sarah, who is quite taken with this rugged antihero she cannot touch and who definitely isn’t her friend Melvin. 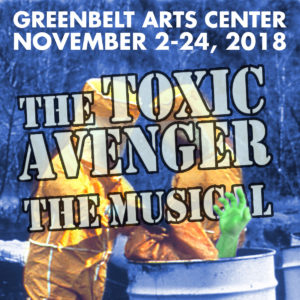 Musicals about green vigilantes aren’t an easy sell, but for those who enjoy comic books and works that deconstruct comic book tropes through self-referential humor, it is a win.  And through strong execution it will appeal to both to aficionados of musical theatre and to comic book fans.

It is often difficult to effectively stage musicals with frequent character changes and a small cast and stage, but The Toxic Avenger is tight and creative, making use of the five-person cast with whirlwind, beautifully choreographed costume changes and an excellent supporting cast.  The set (designed by David Eric Selvin) and lighting (designed and executed by Jeffery Lesniak and Emily Neubauer respectively) are minimalist, to allow fewer distractions to the action at hand (of which there is a lot) and the band (composed of Elizabeth Alford, Rachel Sandler, John McCloskey, Chip Racster, and Larissa Hannon) play onstage, which provides stronger acoustics for a more intimate setting.  They don’t interact with the action onstage, which works well as it keeps the action onstage from losing focus, and the simple efficiency of the set design (trash/waste bins and a painting of the background filled with trash cans overlooking the grandeur of Manhattan) provide enough of a backdrop to inform without overpowering the stage.  The costuming (courtesy of Jeane Binney) similarly is meant to provide a timeless look for a modern era and does so efficiently.

Matt Gray plays the titular role alongside Jessie Duggan, who plays Sarah with equal parts cheer and infectious energy.  Together they provide the show with camp and conviction.  Pamela Northrup is an absolute powerhouse in the dual roles of villainess Belgoody and Melvin’s (Toxie’s) nagging mother (and a nun in one scene.)  One of the strongest numbers in the show, “Bitch/Slut/Liar/Whore” requires Northrup to have a seething belter of a duet with…herself.  And it’s wonderful.  Todd Hines and Michael Iacone, both credited with multiple roles each, have the lion’s share of multiple characters and constant costume changes, and both are excellent here.  They’re a joy to watch in every role they play—and they have so, so many roles to play.

Heather Harris deserves a lot of credit not only for her dance choreography or the delightfully campy fight choreography, but also for staging what are again some borderline miraculous quick costume changes.

This isn’t a flawless production, but neither is the musical in general, nor certainly is the source material for that, but it is an interesting watch.  And it works whether one sees it as a deconstruction of the comic book hero or antihero trope or as a twist on conventional musical theater sensibilities.  What’s more, it is truly fun.  While one could argue that the musical is flawed (is it a true deconstruction of hero/antihero tropes or is it a dark comedic romp?) the production itself is well crafted, the cast forms an overall strong ensemble, the band is good, and the music is catchy.  It is, effectively, what an audience would want in a musical, even if the darker (and there are moments it gets dark, which is not a surprise to those who saw the 1984 movie) or campier themes are not for everyone.

The Toxic Avenger plays through November 24, 2018 at the Greenbelt Arts Center— 123 Centerway in historic Greenbelt MD. For tickets call the box office at (301) 441-8770 or purchase them online.

Return to the Forbidden Planet at Greenbelt Arts Center

Review: Any Given Monday at Greenbelt Arts Center
Close