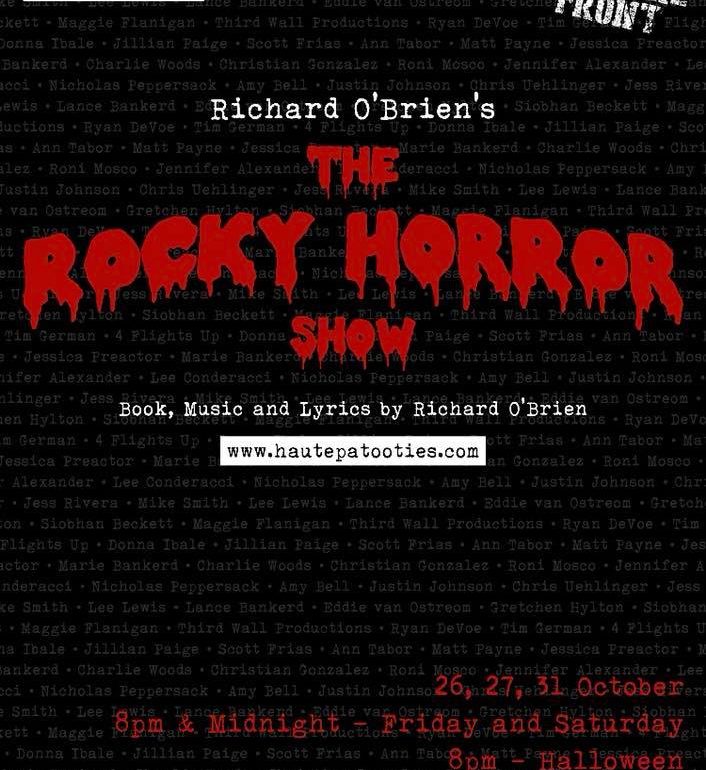 Haute Patooties! Bless my soul! Haute Patooties! They’ve got rock-n-roll! The Haute Patooties— your very own Baltimore-based Guerilla Theatre Group— are rocking-and-rolling with their very own Rocky Horror Show and its wild, simply put. Think you know Rocky Horror? Think again; come rediscover it, see it in a new light, and experience the collaborative effort that is a cult-classic musical done up right-n-different with Haute Patooties this Halloween season.

This is usually the part where you get the “directed by—” line and you’ll note its conspicuous absence here. Haute Patooties production of Rocky Horror Show was a collaborative effort where all involved worked collaboratively to create the marvel which appears upon the stage before your eyes. It sounds catastrophic; how can a complex show with choreography and costumes and musical numbers (not to mention the hundred other little nuances that accompany a show like Rocky Horror) go off without a hitch if there’s no director? But the result is astonishing. The Haute Patooties just might be onto something with this collaborative effort; their vision was successful— the production does its legacy justice whilst o’er layering new concepts, notions, and themes all relevant to today’s politically charged atmosphere.

Rocky Horror Show comes with its own cult following, to be sure, and the Haute Patooties are deepening the bench of potential lovers with their lens of focus. It’s 2018— so the callouts of “slut” whenever Janet’s name gets mentioned get throttled right back from the Narrator, saying “It’s 2018, we don’t slut-shame anymore.” There are other modernities and instances peppered liberally throughout the production, that give the show an overall embracing squeeze of the present day. There’s a focus of consent, acceptable behavior, and human emotion (even among those not quite human) and a forward, progressive acceptance of body positivity all around in the production. Phantoms and named characters alike are dressed as expected for a production of Rocky Horror, but the one thing that is notable across the board is how comfortable everyone feels in their costumes, many of which would be labeled as sexy, risqué, and revealing.

The company plays against the stereotypical casting of the production; they pull together talented individuals of all sorts from a variety of ages, ethnic backgrounds, gender identities, and physicalities, but they are all surging with talent and a willingness to share that specialized skill set that is the performance trifecta of singing, dancing, and acting. Rocky isn’t a plasticized commercial ad for Brick-Bods, Dr. Scott isn’t disabled, and Eddie isn’t played by a man. There are multiple levels of unique approaches, including the added implications and deep humanization of a great many of the characters, in addition to all of the hilarious nonsense and shenanigans that accompanies this particular show.

The setting is deceptively simplistic. The creative team— Lee Lewis, Will Zellhofer, Jim Shomo, Charles Hirsch, Mike Zellhofer, Gretchen Hylton, Amy Rudai, Marie Bankerd, and Lance Bankerd (if you know these folks then you have a pretty good idea of who manned what, but even here in the departments of Lighting, Sets, Costumes, and Sound, it was a collaborative effort)— has set forth all sorts of painted imagery all over the floor and the doors. The centerpiece of the production is a huge cage-ring scaffolding light fixture, which gets climbed on, crawled around, and ultimately creates that crazy, zany, glamourous concert effect whenever one of the bigger musical numbers is underway. The spacing and lighting tie-in well with all the design elements to bring that critical moment of mass hysteria to its zenith of perfection: “The Time Warp” is a real killer. (So too are some of the other big dance numbers, but everyone gets judged on “Time Warp.”)

The Phantom Core— Amy Bell, Maggie Flanigan, Chelsea Paradiso, Charles Woods, Chris Uehlinger, Rory Kinneson, Nikolai Swarczek, Stephanie Edwards— possess a fluid integration of presence and attention in their movements all throughout the performance. One of the most striking and memorable moments that these divine denizens of darkness get themselves all twisted around is the moving staircase scaffolding during “The Sword of Damocles”; can’t say too much else on it because it really is quite something to behold and it shouldn’t be spoiled. This Phantom Core is the moving force of various and sundry things that happen all throughout the production, and they all take turns both before the show starts and during the intermission working the concession stand and the bar. It’s immersive and entertaining to say the least.

Cameo craziness is bursting out of Siobhan Beckett and Heiko Spieker, playing Eddie and Dr. Scott, respectively. Rocking up to the scene with gnarly road rash ripped into her skin, Beckett belts and blasts her way all through “Hot Patootie”, really ripping the number into energetic shreds. Spieker, who arrives as— Great Scott! Wait— no— Dr. Scott! Yes, that’s it! Spieker, who arrives as the aforementioned Scott, leads the group in a rollicking good romp through “Eddie’s Teddy” (which features Beckett gazing lovingly on all through the background of the number) and really does a number with his highly affected German accent. Spiker also bursts out— in ways indescribable— during “The Floor Show” sequence.

The Narrator (Roni Mosco) and Trixie (Christian Gonzales) are having their own bits of cameo fun over the corner tucked off to the side of the play space. Mosco, with a deep and sensual narrative voice and presence, really hones in on the modern nuances that have been layered into this production. Seating Advisory: take seats on the far wall of the house so that you can have the full experience of all the tomfoolery that this diabolical pair gets up to whilst chewing background scenery throughout the performance. Both Mosco and Gonzales have extraordinary vocal capabilities, which they get to showcase directly during “Science Fiction, Double Feature” right at the top of the show.

Atticus Emerson takes up the role of Rocky and is rocking the shimmer beard and gold unitard for that ‘perfect creation’ look. Emerson too gets a chance to showcase some impressive vocal chops during “Sword of Damocles” and later during “The Floor Show.” What’s fascinating about Emerson’s portrayal of Rocky is the human tenderness being brought to the character. Particularly when interacting with Janet (Donna Ibale), you see the congeniality that Emerson brings to Rocky; there is a heavy focus on Rocky’s sensuality and less on the fear and panic that often accompanies this “new to the human life experience” that gets embedded deeply in the Rocky character.

Oh, Damnit, Janet! Donna Ibale is having a field day with Janet and so is Justin Johnson— wait— technically yes, but Justin Johnson is having a field day playing Brad. Ibale and Johnson have that cheesy campiness of the two characters down to a finely practiced science, and yet it’s not that annoying squeaky nonsense that is seen in most other productions of Rocky Horror. Both Ibale and Johnson have powerhouse voices, which do wonders over their various songs. Watching Ibale burst out during “Touch-a Touch-a Touch-a Touch Me” is deeply rewarding. Johnson creates a uniqueness in Brad via his interactions and pantomime with the audience all throughout the performance. They play well with one another and with the group.

Columbia (Jennifer Alexander) is her own unique entity. Refusing to be pegged into the shrill, squealing bubbleheaded tap-dancing stereotype that Columbia is often perceived as, Alexander finds deep inner strength to pull into her rendition of this ‘guest of the house.’ Columbia, who isn’t like Frank, Riff, or Magenta, but really isn’t from the outside either, was always somewhat of an enigmatic anomaly that just seemed to exist inside the house of horrors that is Rocky Horror. Alexander changes that in her mind-blowing eruption fuming at Frank just before “The Floor Show” gets underway. This moment gives an electric charge to Magenta’s story as well, but serves as an Everest of sorts for the Columbia character. It’s also delightful getting to hear Alexander hit the top notes during “The Time Warp” chorus.

Riff Raff (Matt Payne) and Magenta (Lee Conderacci) are virtually indescribable. Even in the original production, movie, and subsequent productions of note they were difficult to articulate because of what they are and how they function in the production. But Payne and Conderacci explore that notion on a whole different plane of existence. Conderacci takes point on the duo’s bizarre relationship, guiding it— as well as her relationship with Columbia— to that of a more protective, strength in numbers, sort of existence. There are divine moments of enlightenment, most of which exist in Conderacci’s expressively animated facial features, that transcend emotional levels profoundly. These expressive moments that Conderacci hones and refines in Magenta give proper plot motivation to the ultimate departure that the pair makes toward the show’s conclusion. Roaring with ferocious voices, both Conderacci and Payne bring thrilling new life to “The Time Warp” and Payne also deserves great praise for his scaffolding-perch belting during “Over at the Frankenstein Place.” The pair are perfection in this production.

Words fail even this humble scribe when it comes to putting accurate descriptions to Lance Bankerd’s Frank-N-Furter. (SPOILERS…Lance Bankerd is playing Frank-N-Furter.) There’s an insane amount of panache and sassy flare that Bankerd is putting forward in the role, in addition to the ferocious rumble of his voice that just reinvents Frank in a wild and riveting light. There is something otherworldly about the way he delivers “I’m Going Home” and his arrival and overall execution of “Sweet Transvestite” is just to die for. Seriously, just see the show, because words here don’t do the portrayal enough justice. And that really goes for the entirety of the concept, the performance, the creative elements, it’s unique but familiar, cherished yet unexplored. One for the books, with only a few shows on the calendar, don’t miss your chance to catch Rocky Horror Show here with Haute Patooties this Halloween season.

Rocky Horror Show plays through October 31, 2018 with Haute Patooties Fallout Shelter of the United Evangelical Church— 923 S. East Street in the Canton neighborhood of Baltimore, MD. Tickets are available at the door or in advance online.