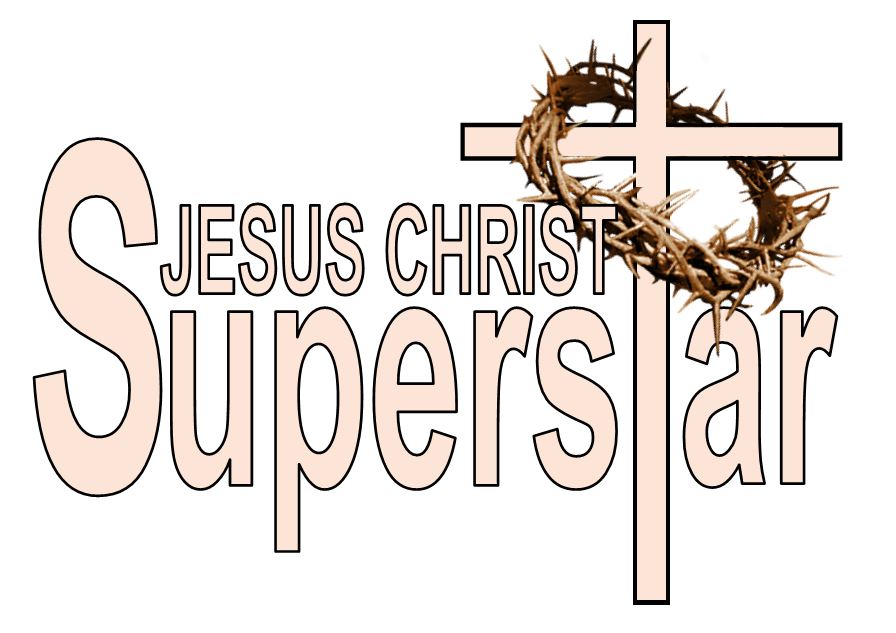 Roll on up for the price is down, come on in for this show’s in town— see with your eyes— what this company’s done— hear with your ears— as they sing as one. Won’t you go see— their Jesus Christ? Won’t you go hear their Jesus Christ? That’s Jesus Christ Superstar, the Andrew Lloyd Webber raging rock musical version of select sections of the new testament up to and including the crucifixion of Jesus. (Sorry if that spoils the read for anyone.) Just Off Broadway is staging their 2018 musical at the Epiphany Lutheran Church and like all companies who play in and out of church sanctuaries, basements, fellowship halls, etc., they’ve finally succumbed to producing Jesus Christ Superstar. Directed by Jason Crawford Samios-Uy and Patrick Jay Golden with Musical Direction by Pam DeLisle and Choreography by Katie Gerstmyer, the roaring rock score rages through the high-vaulted ceiling of ELC’s sanctuary with six sorts of intensity.

Juxtaposing forces of Weber’s 70’s rock score and the Just Off Broadway’s production concept gel surprisingly well, partially because Directors Jason Crawford Samios-Uy and Patrick Jay Golden don’t deviate far from the initial intent of the show. Presenting it with a straight forward approach, save for some costuming choices, the show’s narrative is kept in-tact, sans over-complicated and undercooked concepts, which is all the rage when remounting Superstar to the stage these days. The production’s biggest fault— a perpetual work in progress— is the sound balance and microphone issues that prevents the cast from being clearly understood or at times even heard at all when they sing.

The live pit, conducted by Musical Director Patty DeLisle, is enthusiastic and invested in what they’re playing, and in losing themselves to their enthusiasm, overplays a great deal of the show. This is effect is magnified by the lack of sound dampening and sound barriers, exposing the band to the sonorous echoing vault that is the Epiphany Lutheran Church play space. In addition to these sound complications, the microphones used on the cast are faulty at best, cutting out frequently and dropping actors all together for large segments and whole sections of songs at a time. This became troublesome as the band was unable to compensate with a volume decrease. Fortunately, the actors on stage were highly expressive with their facial features and overall gestures and body language.

The show’s other issue is the imbalance of choreography throughout the performance. Choreographer Katie Gerstmyer over-choreographs numbers that could use less meticulously metered movement and under-choreographs opportunities that are crying out for dance routines in the script. The entire opening, from the “Overture” through to “What’s the Buzz” is an exhausting marathon of highly technical dance steps, lacking the relaxed and party-raging atmosphere that is so often used for these numbers while “Herod’s Song” and “Superstar” have a few female dancers doing simple step-shuffles in their standing line. The choreography also feels repetitive; Gerstmyer over extends her hallmark of arm swoops and spins, infiltrating every routine she crafts with these moves.

The complaints about the show’s overall choreography are almost entirely forgivable, however, as Gerstmyer creates an extraordinary dance routine for herself in a place where a most unexpected dance routine is executed as a profound and harrowing moment of theatre. Gerstmyer, who is credited as “Lasher”, embodies and personifies the whipping of Jesus Christ during “Trial By Pilate.” In ever productive this reviewer has ever witnessed, an individual cracks a whip (or an imaginary one) and sometimes the actor playing Jesus is bloodied; sometimes he is not. In this production, Gerstmyer— clad in blood-drenched rags— spirals out from beneath a hooded black cloak and begins to assail the actor playing Jesus in an evocative and haunting dance routine that is caught in the crosshairs of a ballet execution and a demonic possession. Pilate counts the lashes, Gerstmyer flings her hands at Jesus, kicks her legs at him, and attacks him with her dance, all the while bloodying his body as if she were the whip incarnate. In a way, this is more disturbing than watching a mere whip be flung at the actor and so deeply profound in its constructed representation that it forgives a multitude of Gerstmyer’s sins as the show’s choreographer.

Despite the sound balance issues, the microphone issues, and the overall imbalance of the choreography, Just Off Broadway has amassed a talented, invigorated cast, who moves with the speed of the music, and energetically keeps the production rolling. Samios-Uy and Golden drive a hard pace to the show, omitting the blackouts between scenes and never letting the moments of the show slow or stop, rolling one deliberately into the next. It makes for a high-octane experience that really charges up the blood with a momentous fire. The simplicity of Theresa Bonvegna’s set is both functional and adds to the swiftness with which the production moves. While their decision to use a modern aesthetic for the cast’s costuming is questionable, it doesn’t detract from the production. Costume Designers Elton Knupp and Tina James (and the cast) use a rather grungy 90’s underground aesthetic for the overall sartorial selection, and this doesn’t harm the show’s talent or overall execution. Pilate even looks like a mafia boss, decked out in his broad white suit, gold neck-chain, and tie (an homage to Pilate’s Italian roots) and Mary Magdalene has the appropriate fishets and high boots look about her as well.

With a rowdy ensemble, which bodes well for the temperament of the music, Samios-Uy, Golden, and Musical Director Patty DeLisle have no trouble evoking energy from the cast. Voices of standout note include Jeff Baker, playing Peter, whose striking solo fueled by rage during “Peter’s Denial” is edgy and proves a sharp contrast from the mellifluous sound he creates in his duet with Mary Magdalene (Jennifer Lutz), “Could We Start Again, Please?” Both Baker and Lutz drift with clear emotional intent and sharply honed tonal enchantment through this number. Lutz takes a traditional approach to Mary Magdalene but maintains a lively spirit on the stage. There is nothing stale about her performance and plenty tender, especially when she belts out her solo “I Don’t Know How to Love Him.” There is a gentleness to her face, voice, and physical expressions when she sings this number and “Everything’s Alright”, yet another attempt to assuage the fears, rages, and furies in Jesus.

Though not a particular balm or even really a comfort, Pilate (Mike Zellhofer) is a last-ditch effort toward Jesus’ corporeal salvation. Zellhofer, who well-embodies the presence of a Mafioso, stalks clear and low in the same range as Caiaphas but with far lighter intents and much less malice. Both “Pilate’s Dream” and “Trial By Pilate” are intense numbers that give Zellhofer the opportunity to stretch his vocal muscles. On the flip side of Pilate is Herod (Atticus Emerson.) Dressed in a furry red Elmo-skinned cape and for all the world looking like The Burger King-King, Emerson schmoozes and wings his way through “Herod’s Song” living up his 15 seconds in the lime-light in what is arguably the outlier in Webber’s songs. When not hot-footing it about as the silly King Herod, Emerson blends well into the ensemble and moves emphatically with the rest of the cast.

Malignant, malevolent, and very off-putting, Caiaphas (Chris Thomas) leads the hoard of priests (Dave Gerstmyer as Annas, and Jeff Baker, Randall Noppinger, Lee Knox) through “This Jesus Mus Die.” Thomas is a vocal spook that sends shivers up the spine as he lays into the depths of his base range to achieve the creepy and unsettling corruption that resonates through Caiaphas. Stalwart and ferocious, Thomas delivers blow after blow in the aforementioned number as well as when he sings at Judas the damned during “Damned for All Time/Blood Money” and at other points in the production.

The show’s directors have created an intriguing dynamic between Jesus of Nazareth (Luis “Matty” Montes) and Judas Iscariot (Jim Gerhardt) with their casting choices. Samios-Uy and Golden create a striking series of character motivations, particularly for Judas, by using a young 20-something as Jesus and featuring a talented stage veteran some two decades older in the role of Judas. The look alone (though to be clear Jim Gerhardt does not look 40, but more a passable mid 30’s) in the face-off scenes where the petulant and angry Jesus is screaming at the sagely and equally furious Judas is breathtaking and gives worlds of new, layered meaning to their differences and to Judas’ overall motivation.

Montes, who possesses the attitude of unruly and untouchable for most of his reign as Jesus, is a worthy opponent against the time-wizened and vocally stellar Jim Gerhardt. The pair create riveting moments of tension, particularly when circling one another in the earlier part of the production. This makes their encounter just before “The Arrest” that much more disarming and jarring. Montes scrambles the ladder of emotions throughout the play but most expressively during “Gethsemane” whilst Gerhardt tackles each of his musical solos with unrelenting intensity and expression. The pair have the peak of perfection when it comes to their screaming top-tenor sounds, belting their souls out during those insanely high moments of conflict. Watching the soul-searing regret, confusion, and desperation on Gerhardt during “Damned for All Time/Blood Money” is gut-wrench, but makes seeing his rise to confidence in “Superstar” that much more rewarding.

A tremendously talented cast with a lot of energy and enthusiasm to give the production, Just Off Broadway has a sound production of Jesus Christ Superstar on their hands, if only they can get their actual sound in balance.

Jesus Christ Superstar plays through October 21, 2018 with Just Off Broadway Baltimore at the Epiphany Lutheran Church— 4301 Raspe Avenue in Baltimore, MD. Tickets are available for purchase at the door or in advance online.