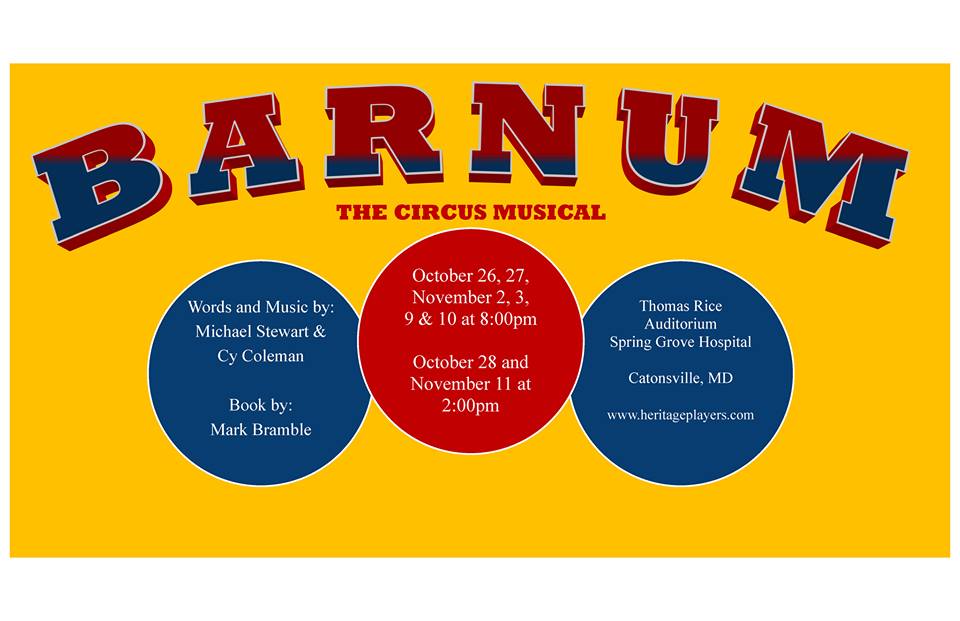 Ladies and gentlemen! Boys and girls! Children of all ages! Step right up to The Heritage Players and see The Greatest Show on Earth! Why it’s a miracle! Of course, miracle is a pretty fancy word for humbug, or so Mrs. Barnum will tell you. But a bit of brass and humbug is just as good as silver and gold, Mr. P.T. Barnum will tell you than himself! Barnum, the musical of the circus legend tumblesaults its way up the aisles of the Thomas Rice Auditorium at the Spring Grove Hospital Campus and onto the stage of The Heritage Players, ready to present you with a whimsical and unusual engagement for the fall season. Directed by Jim Gross with Musical Direction by Mandee Ferrier Roberts with Choreography by Kelly Alt, this rapid-patter narrative explores the greatest showman ever from his museum in the big apple right up to his partnership with Bailey; it’s got a little humbug for everyone!

Mark Bramble’s book and Cy Coleman’s music isn’t particularly impressive, all things considered. Granted the musical was slapped together for the Broadway stage in 1980, but the narrative and overall storyline structure leaves much to be desired. Bramble bungles about in the bushes of Barnum’s life, and captures the specific momentum of 1935 through to his partnership with Bailey in 1880, glossing over larger details like P.T. Barnum’s attempted political career in half a song or less, and focusing far too intensely on the non-existent affair with one of his side-show acts. Coleman’s music isn’t particularly memorable, though pretty, and doesn’t exactly stamp the brain with anything profound. The show’s saving grace in regards to its creators comes by way of lyricist Michael Stewart, who has some rather clever tricks tucked up his sleeves, especially when it comes to the descriptive colors featured in “The Colors of My Life” and the enthusiastic patter of descriptors used in “Museum Song” and “The Prince of Humbug.”

The Heritage Players makes a bold decision to tackle the problematic musical with lackluster plot, mediocre musical numbers, and disenchanting characters, but does a surprisingly impressive job putting new life into the tale. The production is not without its issues; Kelly Alt’s choreography is a bit simplistic and distributed somewhat unevenly over the course of the performance and doesn’t involve enough of the circus flare. Ryan Geiger’s set, although brightly red and white (despite some cast-company caused paint splotches), is also overly simplistic and just creates the mere illusion of a circus tent, though it could be supposed that the intent behind this is the concept of engaging the imagination. As Barnum says, there’s a sucker born ev’ry minute, and perhaps the production is attempting to flimflam and bamboozle its audience to seeing razzle-dazzle delights in the ordinary and mundane.

Barnum himself is not dressed as one expects for a master circus man, though this is aptly fitting as this cross-section of his life is primarily focused before his circus get underway. Costume Designers Lynn Kellner, Amy Bell, and Director Jim Gross have done a solid job in allowing Barnum’s primary costume to pay homage to the times without being particularly period appropriate. Where Kellner, Bell, and Gross truly succeed in period-appropriate pieces is with Charity Barnum’s outfits. Her high-collared, high-waisted ensembles fit the era and give her a proper motivated suffragette appearance, while keeping her soft around the edges. The color scheme used for this character matches her grounded nature. Where Kellner, Bell, and Gross struggle with costuming is in the ensemble. Though everyone looks quite whimsical, various bright shades of the colors of the circus, it’s all rather modern. One can excuse the glittery face paint of circus individuals (makeup design credited to Katy Kennedy) but the vast majority of the pieces look quite modern, pulling the audience out of the mid 1800’s in a distracting fashion.

Director Jim Gross does keep the pacing moving, if at times some of the scenic shifts hiccup and bounce about. Gross makes intriguing choices with various themes of the production, some of which work better than others in their actual execution. Choosing to let the circus-ensemble double up as other characters (like various business men who deal with Barnum) is a smart use of the cast, but leaving them in their circus costumes with just a business jacket or hat, has the opposite effect and creates costume confusion rather than augmenting the notion that everyone is a performer in the circus of life. This conceptual application could have been readily cleared up with better costuming choices. Gross also chooses a questionable method to illustrate Tom Thumb (Alex Grillasca Velasco)’s tininess. There are always challenges when characters are meant to be ridiculously sized in one direction or the other. Gross uses an enormous chair (compliments of Properties Mistress Megan Mostow) to illustrate Tom Thumb’s diminutive stature. But the framework for the illusion is quickly swept away, making the actor (who performs the role with a great deal of pluck and passion) appear normal-sized once more. Further confusion is added when they introduce Carly Dagilis to dance with the character, and while the couples dancing is sublime and adorable it raises questions. Is there a Mrs. Tom Thumb? Two tiny people? Or did Tom Thumb grow to normal size and it’s all just a part of Barnum’s flimflam?

Otherwise, the show presents a strong ensemble; the vocals are sound, and the various performers keep good time and strong pace with the pre-recorded music. Jamie Nash (who at this performance also doubles up as Amos Scudder) is a fine juggler, who we see tossing clubs about often. There are other circus acts— including a great deal of fun from the silly clowns (Joey Light and Megan Lowcher)— that are sprinkled liberally throughout the production, though in no particular functioning order. Running away with her cameo role of Joice Heth, the oldest woman on earth, Renata Hammond puts a whole lotta punch and pizzazz into her poppycock and pretense! With a ferocious voice that all but belts through the backend of “Thank God I’m Old”, Hammond really draws the limelight all around her zany character, who is just another bunch of bunk brought to fruition by Barnum and his clever pitching. Hammond delivers a clear bout of lounge-lizard soul in the second act when she’s performing “Black and White.”

Songbird and delightful soprano Kelly Rardon plays the Swedish Nightengale Jenny Lind. Her accent is quirky, her ability to stumble through learning English with P.T. Barnum is highly humorous and her overall stage presence is perfect for the interloping characterized cameo part. Rardon has a strong voice, which glides and glistens through “Love Makes Such Fools of Us All.” See if you can’t catch her buried in the ensemble as the ferocious lion tamer too, though her interactions with P.T. Barnum are much more intriguing when she’s swept up in the ingénue type role.

Master of ring and ceremonies, James Doggett dons the shiny blue jacket of Ringmaster; it is rightly fitting that he becomes Bailey at the end of the show, bringing together the greatest show on earth— Barnum & Bailey. With a commanding presence, Doggett’s character serves as a narrative force, often giving little blips of expository framework for the various ‘rings of entertainment’ that float all around Barnum as he progresses through the production. With a bold voice that rings out clearly during “Join the Circus”, Doggett brings much to the uplifting nature of the character, shifting from Ringmaster to Bailey in this moment, but clearly sharing the spirit of both throughout the show.

Flimflam versus fact and humbug versus truth is the fascinating dynamic that continually builds between Barnum (Matt Wetzel) and wife Charity (Rachel Weir.) The earnest exchanges between the pair drive the production forward; Wetzel and Weir have a vivacious chemistry between them both lively and realistic, which feeds their quaint and quirky quarrels with an endearing flame of love. When the pair sing in duet for “The Colors of My Life” they could not be more opposite in their sentiment or emotional overtones, but their voices blend divinely. The way the pair plays off one another is exquisite and works well for the structure of this narrative.

Weir, as the stoic and fact-based Mrs. Barnum, is a pillar of strength in this production. She is the epitome of truthful spirit, radiant in her dedication to both truth and her husband. With a firm and beautiful voice, “One Brick at a Time” inspires confidence with fortitude. There is a somber sobriety to the way Weir sings her final notes of “The Colours of My Life (Reprise).” Full of pluck, Weir holds her own against the spastically vivacious Barnum, even if she chooses the ordinary, the lackluster, and the ‘black and white’ over the razzmatazz, the glitter, and the rainbow path that her husband follows.

P.T. Barnum incarnate is the best way to describe Matt Wetzel as he leaps and bounds indefatigably around the stage. There is an undeniably exhausting vivacity that Wetzel imbues into the character, giving him that sparkling edge that is expected and required of the larger-than-life showman, P.T. Barnum. Even more impressive than his perpetual energy and undeniably impressive way that he patters at top speed through both “Museum Song” and later “The Prince of Humbug”, is the striking humanity that Wetzel puts into the character. He is more than just flash and flimflam; he achieves more than just spectacle and creates a surprisingly deep substance in the character. There is a harrowing moment near the end of the first act when humbug shifts treacherously into blatant dishonesty and the solemn way which Wetzel delivers it is breathtaking. Beneath all of the heightened hilarity and hyperactive motion, there is a sincerity that makes Wetzel’s performance real, whether you buy into Barnum’s bunk and baloney or not.

A difficult show not without its challenges, Barnum is a uniquely untold tale. Wetzel and the vocal talent of the ensemble are worth the price of admission alone and some of the other questionable struggles are easily forgiven because of their talent.

Barnum plays through November 11, 2018 at The Heritage Players in the Thomas Rice Auditorium of the Spring Grove Hospital Campus— 55 Wade Avenue in Catonsville, MD. Tickets can be purchased at the door or in advance online.

James and The Giant Peach at Heritage Players