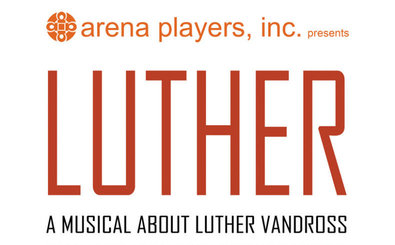 I had the pleasure of spending a Saturday evening with Donald and all of the talents that make up the Arena Players. I love this company. They are not just Baltimore treasures; they are gifts to art now and for generations to come. For six and a half decades they have been the consistent home for black theatre in our city, training artists, giving opportunity to performers and designers, and producing canonical and new work. Arena’s current offering, Luther, is an original musical on Luther Vandross created by Randolph Smith.

The piece deftly avoids some of the traps that plague ‘jukebox’ shows by centering the action on Vandross’ physical and emotional recovery from a stroke and how that process influenced the creation of his 2004 smash hit, “Dance with my Father.” The evening is well paced and nicely crafted. The music is a hit parade of Vandross songs that flow through casual dialogue between Luther and his mother, friends, and duet partners. Randolph Smith crafts an experience that is personal and touching without being maudlin and gives you just enough information to become invested without feeling like you are watching a “Behind the Music” episode. Smith takes on many responsibilities for this production (creator, designer, director) and he succeeds admirably. Creating original musicals is one of the most difficult tasks that a theatre artist can engage in and I hope that Randolph will keep up the hard work; it is worth it for all involved.

It is so much more difficult to have a show based around a real person. The material is familiar, sometimes sacred. Everyone has their own opinion on the subject; we all have a personal relationship with these cultural icons, that particular sound or trait or look that lives deep within our memory… and Tamba Giles delivers a performance loaded to the brim with so much nuance, detail, and passion that, for us in the audience, he may as well have been Luther Vandross. From his first notes the crowd was yelling, I am not joking, patrons were calling out to the performer, they were so taken. Giles’ voice is velvet. His showmanship is enviable, over the course of the two hours he never misses an opportunity to make eye contact with every audience member that he can and deliver a lyric to them. We were melting one after the other. Most impressive was his effort to impart the physical recovery process (with wheelchair, walker, and cane) without ever sacrificing the gracefulness that is the highlight of a Vandross performance. The evening rides on Tamba and he gave a performance that would make Luther Vandross proud.

The show’s repertoire includes several of Vandross’ famous duets and Tia Roundtree is outstanding as Tamba’s partner, taking on multiple roles as the women in Luther’s life. Her first song inspired another vocal response from the crowd and she never let us go, using the same skill for performance we come to expect from this cast to lead the audience in a group gospel ballad; she had us singing full force. You would be lucky to walk into either of the churches where these two have honed their formidable skills. The rest of the cast supports their leads well, appearing as reporters, doctors, angels, fans, and in a rather beautiful moment Artartus Jenkins appears as Luther Vandross Sr. to finally have his dance, and boy can he dance. This ensemble is clearly invested and having an infections amount of fun. This joy comes to a fever pitch in a full stage dance number that even saw people out if their seat and dancing with he cast. It was a thrill!

Technical elements were sparse. Which was well enough as the intimacy resulted in a performance that felt more like a chamber concert than a splashy biopic. Most important for a show like this was the sound… and I have no complaints. The accompaniment was balanced and the board tech was on point. No small feat, believe you me. This production doesn’t last much longer so you have to get down to Arena Players to see Luther, now! You should really go. Luther is an obvious labour of love and that passion steps right over the footlights. I guarantee that you will have a good time, in fact, I expect to see you dancing. This is original musical theatre at a company that is an integral part of our Baltimore arts community. Support them, invest in local art, and have yourself a good time all at once. What more could you ask for?

Luther plays through September 30, 2018 at Arena Players— 801 McCulloh Street in Baltimore, MD. Tickets are available for purchase at the door, or in advance online