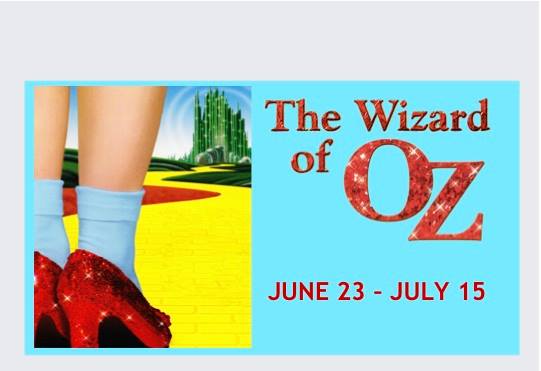 Charm City Players ends their 5th season by showing us all that there is no place like home in this timeless classic, The Wizard of Oz. Based on L. Frank Baum’s popular series, with music and lyrics of the MGM motion picture score by Harold Arlen and E.Y. Harburg, background music by Herbert Stothart, and book adaptation by John Kane from the motion picture screenplay. Director Stephen Napp takes us over the rainbow into the merry old land of Oz, where munchkins, witches, and temperamental trees take us on a journey through the Yellow Brick Road.

Napp’s direction works very well to tell the story of this well-known classic in a way that his audience will definitely enjoy. He knows how to guide his cast, lighting, and set design in order to make the best use of a large stage, keeping the audience’s attention in the correct spots and allowing for the occasional subtleties in the sidelines. Perhaps the biggest flaw of the show may be the long time it takes for transitions. Having Dorothy and her three companions parade around the audience every time they’re off to see the wizard may sound good in theory, but in practice it makes the transitions linger longer than it takes the crew to prepare the next scene. Napp’s originality and skillful use of his cast’s talents show best in his decision to relay “The Jitterbug” song to the Wicked Witch rather than Dorothy, which increases the importance of an antagonist that lacks vocal exposure in other productions of this musical. The highlight of Napp’s direction comes when it’s time for the Wicked Witch’s demise and can be clearly heard as the audience cackles in response to his brilliant approach.

It takes a particular amount of effort to take a group of people and guide them through singing in perfect unison and/or harmony. Music Director Kathryn Weaver successfully tackles this challenge not only with a group of adults but also with a large ensemble of children. Her guidance results in a high-energy and well-sung “Munchkinland” that only requires improvement in the diction of the children’s chorus. Weaver’s efforts do not cut it short when it comes down to the first act’s finale, when Dorothy and the trio deliver a flawless four-part harmony as they arrive at the emerald city.

If getting a group of people to sound good takes a great deal of effort, try getting them to dance and look good. This task is gracefully accomplished by Choreographer Jason M. Kimmel. You get a first glance at his work when the children ensemble’s energy booms as you hear “Ding Dong, The Witch is Dead!” and they make full use of the stage in their dance. Jason’s choreography for the adults shows his expertise as they do highly entertaining dances to “Merry Old Land of Oz,” and “The Jitterbug.” The only shortcomings of Kimmel’s choreography are the static “We’re Off to See the Wizard” reprises, but these are easily overshadowed by the rest of the numbers, particularly the expertly choreographed ballet dance performed in “Poppies.”

Set Designers Napp and Annmarie Pallanck make exquisite use of colors to contrast rustic Kansas from the colorful Land of Oz. The monochromatic scenery used at the beginning of the show perfectly emulates the black-and-white opening scenes of the 1939 film, while colorful and beautiful set pieces delight the audience from the very moment Dorothy arrives in Munchkinland. The best example of Napp and Pallanck’s lighting design can be seen during “Poppies,” when their lighting effectively creates the illusion that it is snowing on stage.

Costumiers Patricia Anderson, Mary Gorman, Tara Herbert, and Kathryn Weaver, and Wig Designer Valerie Lockett know how to use their costumes to assist the actors in telling their stories, while at the same time remaining faithful to the film adaptation. They make a masterful use of subtlety when changing Dorothy’s initial dress to a slightly more colorful one, which tells the audience that they’re not in Kansas anymore without distracting them from the story. The only shortcoming of their design may be the Cowardly Lion’s mask, which although it provides the familiar look for the character, it also makes him difficult to understand on several occasions.

If you ever wondered what it’d be like to hear Judy Garland on stage, I highly recommend seeing Heidi Thiessen as Dorothy. If you close your eyes as she starts singing “Over the Rainbow” you can almost feel like you’re watching the 1939 film. The quality and strength of Thiessen’s vocals are undeniable as you clearly hear the vibrato in her voice. But her skills don’t stop there; she maintains a consistently believable southern accent throughout the entirety of the show, and her chemistry with her companions makes you root for her to find her way home.

Jim Knost, Charlie Albert, and James Gilbert make the perfect team as the Scarecrow, the Tin Man, and the Cowardly Lion respectively. Knost’s movement makes you expecting the scarecrow to fall apart at any second, and his vocal delivery is on point at all times. Albert’s deliberately stiff moves genuinely make you believe that he was rusting for years, and his sweet voice (both when singing and speaking) fit the absolute sweetness of his character like a glove. Gilbert delivers every joke with the perfect comedic timing and manages to make clear facial expressions through his mask.

Melissa Anne Martin’s take on the Wicked Witch of the West is a nothing short of a performance worth seeing. Every single one of her facial expressions gets a laugh from the audience, while clearly remaining a threat to other characters, whether it’s as the Witch or as Ms. Gulch. Her delivery of “The Jitterbug” song proves right Napp’s decision to relay the song to her. Martin’s cackle sends chills down your spine in the same way Margaret Hamilton’s did in the Metro-Goldwyn-Mayer movie.

Christina Napp’s portrayal of Glinda the Good Witch of the North is another one that leaves in awe of the similarity with the 1939 film. She carries the iconic accent consistently through her entire performance, even when she’s singing without detracting from her outstanding vocal abilities. The highlight of her acting comes when she confronts the Wicked Witch, incredibly managing to deliver he lines both sweetly and threateningly at the same time.

One of the most important qualities of the actor portraying Prof. Marvel and the Wizard of Oz is his cunning and ability to sweet-talk naïve characters like Dorothy. Randy Weber does an excellent job at living up to this standard, delivering his conversations with Dorothy and the Trio in a mesmerizing and fantastical way to the characters.

Ultimately, Charm City Player’s The Wizard of Oz is a fun family show that everyone can enjoy. The talented cast and crew’s efforts result in a wonderfully entertaining production that is guaranteed to leave the children in awe and fill the adults with nostalgia.

The Wizard of Oz plays through July 15, 2018, at Charm City Players in the Harry and Jeanette Weinberg Auditorium at Mercy High School—1300 E Northern Parkway in Baltimore, MD. For tickets email info@charmcityplayers.com, or purchase them online.