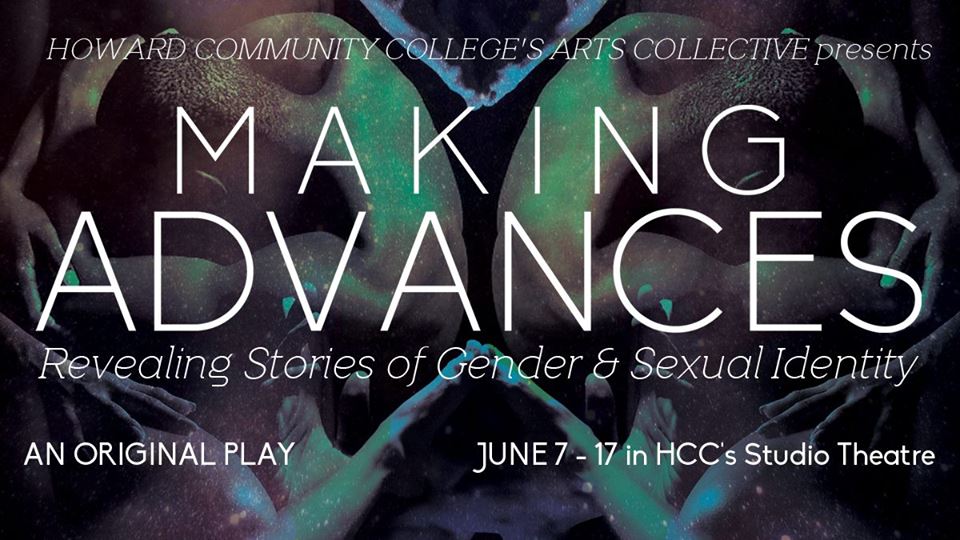 In a time where we are stuck in the middle of acceptance and ignorance, Making Advances has a wonderful look into the lives of different individuals who don’t fit the norm of gender and sexuality that society preaches. The entirety of the play involves short but impactful scenes that range from a male to female transgender girl trying to involve her mother in the difficulties of transitioning, a polyamorous relationship between two males and a female, to even a heterosexual relationship needing more communication in sexual activities. Overall, the cast and crew of this progressive and well done show should really be proud of what they produced.

The production keeps a more minimal aspect with the lighting design, costuming, and scenes. The lighting, done by Andrew M. Haag Jr., included beautiful hues of purple, blue, and other undertones of different colors. Costumes involved a bit of imagination from the audience due to a lot of pantomiming. This technique was also used throughout the scenes to indicate where props might have been.  Each actor had costumes with mixes of dark neutrals like grays and blacks. Costume Designer Jessica Welch had an idea to only work with the essentials and it was a small but important detail to the show. The set design had very few changes, allowing for ease of transition between stories.  Set Designers Emma K. McDonnell and Chaina Hudson built a wonderful set that was just enough to get the story across as well as not take away from any of the scenes or changes.

Jamie Barrios has a strong, caring stance to her with each scene she was in. From playing a sister to an awful politician, to a loving wife to a loving husband, she did an amazing job with each character she portrayed. Douglas Beatty had very dynamic characters and played each of them as if he wasn’t the same person. His characters had a whole range of ages and he was able to portray a child to an older man fluently.

Makayla Beckles has a unique fire to her. Whether it’s an acting choice or just her own personality, she adds a pinch of attitude with each character that makes them her own. Chania Hudson has a soft spoken style to her but still leaves an influence on the audience. Hudson is quick to capture the audience to grow a connection for her to make you feel something.

Daniel Johnston contributed magnificently to the comedy aspect throughout each scene he was in. From a very open polyamorous relationship to a sassy book writing transgender who’s also a former drag queen, Johnston is able to embody his characters as well as keep his own amazing personality in the mix. Kelli Jones has a stage presence like no other. Her distinct emotions that come from her make the audience feel for her. Jones is able to emit this kindness from her eyes when looking at her scene partners that draws you in.

Maia Krapcho encapsulates everything from the special innocence of a child figuring herself out to the protection and chosen ignorance of a mother helping her crooked son. She is the person that comes to mind when I think of the quote “though she be but little, she is fierce” by Shakespeare. Sarah Luckadoo helped make scenes come alive with personal emotion each line she had. Luckadoo didn’t let a beat go by without making each moment count for the audience.

Michael Makar has a certain confidence to him no matter what character he plays. Makar impressively woos the audience with his boyish charm and humor. Allie Press has a small but powerful stance to her every time she steps on that stage. Press’ range of characters are impressive as well as wonderfully done.

S.G Kramer as a director as well as the rest of the cast and creatives who wrote the show should all be proud of themselves. This show leaves an audience thinking of what the open, curious, and all at the same time beautiful future can hold for communities such as the LGBT+ and others alike. This brilliantly designed play deserves to be seen by anybody whether you’re gay, straight, liberal, conservative; we can all learn something new about others and ourselves in little as two hours.

Making Advances plays through June 17, 2018 with the HCC Arts Collective in the Studio of the Horowitz Visual and Performing Arts Center on the campus of Howard Community College— 10901 Little Patuxent Parkway, in Columbia, MD. For tickets call the box office at 443-518-1500 or purchase them online.