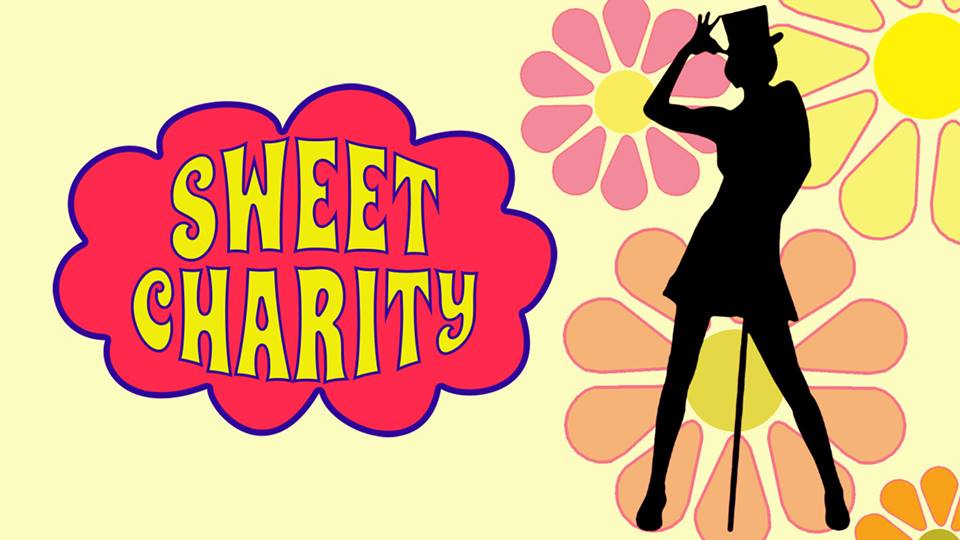 Hey Big Spender! Spend a little time… with Heritage Player’s latest production, Sweet Charity! Based on Federico Fellini’s screenplay Nights of Cabiria, with music by Cy Coleman, lyrics by Dorothy Fields, and book by Neil Simon, Sweet Charity is the 1966 musical about a starry-eyed young woman who’s looking for love in all the wrong places. The show revolves around the ever hopeful and aptly named Charity Hope Valentine, a dancehall hostess at the Fandango Ballroom who dreams of finding love despite her seemingly endless string of break-ups and bad luck. Even though there are many fish in the sea this one always seems to get thrown back (quite literally.) Even so, Charity never gives up on her dream of finding that special someone, and we the audience get to join in for the ride.

Timoth David Copney is in the duel-role of both director and choreographer for this production, which is appropriate for a musical with such a heavy dance presence. His choreography truly shines in this productions, with many of the ensemble numbers being the big highlights of the show. “The Rich Man’s Frug” and “Rhythm of Life” are just two examples of dance numbers with excellent movement and energy, wholly brought out by the show’s stellar cast. There are many times you’d swear the dancers were paid professionals, which just goes to confirm Copney’s strength as a choreographer and director.

The show’s up-tempo music is brought to life by the production’s music director, Mari Hill. The soloists as well as the ensemble are all able to bring out the cheery nature of this show’s score under her direction. The full orchestra is also a major plus to the production, allowing for a full immersion in the musical experience. Hill has done a wonderful job blending the pit with the players, and it shows throughout the entire performance.

The set design done by Ryan Geiger is simple, which allows for a flow of movement between the varying locations throughout New York City. One could argue that the stage seems a bit bare at times and that the emptiness can come off as a little distracting, though this may well be an issue with the space itself. All in all, the design adequately conveys the dark and shady aspect of the shows main setting, the Fandango Ballroom. The lighting design by Al Ramer is also somewhat simple, focusing mainly on spotlighting the various soloists, as well as the signs that pop up here and there to serve as scene transitions throughout the show. While nothing overly complex, this does ultimately work well with the vaudevillian-style of most of the numbers in this production.

The costume design was accomplished by the team of Andrew Malone and Lanoree Blake. For the most part, the costumes are right on the money. The dancehall hostesses each have their own unique look, which goes a long way in distinguishing them. Though some stick out more than others, it still creates a strong tableau when the woman are draped across their signature ballroom dance bar. The costumes for the Rhythm of Life Church-goers are also particularly well-designed. The quintessential hippie garb is perfect, only adding to this raucous, show-stopping musical number.

Speaking of show-stoppers, let’s talk about arguably the biggest stand-out in this entire production: the ensemble. Every company number is a true spectacle in the best sense of the word. The ensemble brings a level of energy and talent to this show that is unmatched by most community theatre productions. I wish there were space in this review to cover every single performer as each one deserves recognition; the ensemble alone is worth the price of admission. However, if I only have space to credit one member of the company, it would have to be Anwar Thomas. His solo as Daddy in “Rhythm of Life”, as well as his dancing and performance throughout definitely steal the show.

One of Charity’s many encounters comes in the form of the B-list movie star Vittorio Vidal (played by Daniel Douek.) After a falling out with his overdramatic love interest Ursula (played hilariously by Bailey Wolfe) he finds a down-on-her luck Charity sprawled in the street, and the two strike up an unlikely friendship. Douek is perfect for the role. He is easily able to portray the character’s outer play-boy façade, while also conveying his actual sensitive and romantic nature. His time on stage is equal parts hysterical and heartwarming.

As stated before, the main setting for the show is at Charity’s place of employment, the Fandango Ballroom. The dancehall has many notable characters, but the three biggest personalities are her fellow hostesses Nickie and Helene (played by Ashley Gerhardt and Megan Mostow respectively) as well as the hall’s manager Herman (played by Jim Gerhardt.) All three performers absolutely shine in their roles. The former Gerhardt and Mostow are flawless as the jaded yet caring confidants to Charity. Gerhardt’s big, brash persona combined with Mostow’s dry and witty retorts are the perfect foil to Charity’s naïve musings. The trio’s signature song “There’s Got to Be Something Better Than This” definitely shows off the range and talent of these performers.

Each one gets to strut their stuff, and while the number is ultimately played for laughs, you can’t help but feel a twinge of sadness as the two women leave the stage knowing their dreams will likely be forever out of reach. Jim Gerhardt’s performance as Herman is also surprisingly complex. While the character could be played as just the cliché jerk of a boss, Gerhardt brings a certain level of humanity to the character. This is shown exceptionally well in the shows final number “I Love to Cry at Weddings” lead by Gerhardt. His singing is sublime, and his overall performance really brings you around to a character that could otherwise come of as little more than a sleazy nightclub owner.

While Charity does find herself in quite a few relationships throughout the show, the longest and perhaps most impactful one is with the shy and neurotic Oscar (played by Adam Abruzzo.) When the two find themselves trapped in an elevator together, Charity takes it upon herself to comfort the obviously hysterical Oscar. Speaking of hysterical, Abruzzo’s performance is just that. As the realization that he’s trapped slowly sinks in, his reactions get more and more over-the-top to hilarious degrees. His abrupt shifts between forced calm and uncontrollable frenzy leave the audience in stitches. His solo number “Sweet Charity” is also well sung and very endearing. The character isn’t all laughs however. I won’t spoil the ending, but know that there’s definitely more to Oscar than first appears, and Abruzzo handles both sides of this character extremely well.

The show ultimately hinges on its title character Charity (played by Katherine Sheldon) who truly makes or breaks this show; and in the case of Sheldon, she definitely makes it. While the show starts out a bit slow (through no fault of Sheldon herself) her energy and comedic timing, combined with her strong dancing ability quickly gets the audience invested. She perfectly encapsulates the personality of Charity: a naïve idealist, but one that you can’t help but root for. Her solo “If My Friends Could See Me Now” is funny and charming, and her big number “I’m a Brass Band” is both a great ensemble piece as well as a testament to Sheldon’s singing, dancing, and acting abilities. Sufficed to say, Sheldon’s performance as Charity is definitely a sweet one.

Ultimately, the true strength of this production comes from its performers. Each and every one of them seems to put their all into this interesting piece of 1960’s musical theatre. While the show may be a bit dated at times, its message surely isn’t. And that message is this: Never give up hope. Well, these performers don’t need to hope for a great show… they’ve already got one!

Sweet Charity plays through April 29, 2018 at The Heritage Players in the Rice Auditorium of the Spring Grove Hospital Campus— 55 Wade Avenue in Catonsville, MD. Tickets can be purchased at the door or in advance online.

Into the Woods at Heritage Players