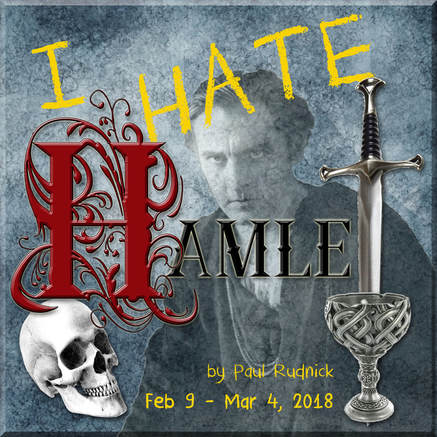 To see or not to see… that is the question! Spotlighters’ latest production in their 56th season is none other than Paul Rudnick’s 1991 comedy-drama I Hate Hamlet, directed by Hillary Glass and Ilene Chalmers. The play revolves around the young and successful television actor Andrew Rally who has just relocated to New York after the recent cancellation of his television show. He finds his agent has booked him a gig as the titular character in Shakespeare’s Hamlet, a role he’s not particularly keen on playing. It also happens that the apartment he’s moved into was once home to none other than one of the most well-known Hamlet’s to ever grace the stage: the incomparable John Barrymore. As luck would have it, the spirit of Barrymore proves to be more than willing to help Rally understand and appreciate the role he currently despises.

Glass and Chalmers do a wonderful job creating the right tone for this show. Each character in this six person cast feels fully fleshed out, particularly the supporting roles. Too often do productions fail to give their supporting cast enough weight; fortunately here, that is no issue. Every actor gets their moment to shine and shows real development, and a great deal of credit must be given to the directors for allowing such growth to occur. Glass also takes on the role of costume designer. The show takes place in current day, so their simple design fits perfectly for the modern setting. This is in stark contrast to the Shakespearean costume worn by Barrymore, which goes a long way to setting the spirit apart from the rest of the cast.

The set design by Alan Zemla is right on point. The intimate stage of Spotlighters’ theatre goes hand-in-hand with the small apartment setting for this show, and Zemla uses the space extremely well. From the cozy fireplace to the hardwood floors, the stage truly feels like it has been transformed into a classic, gothic-style home. The lighting design by Al Ramer also adds a great deal to the show’s palpable ambiance. The stage is bright and clear when the apartment is full of guests, but becomes dark and more focused when Rally and Barrymore have true moments of intimacy and introspection.

It’s important for the first scene of any show to come out strong, and this one hits the mark dead on with the hysterical performance of Shanelle Fontaine as Andrew Rally’s brash realtor, Felicia Dantine. Fontaine has a strong sense of comedic timing coupled with great physicality. Her séance to commune with the spirit of Barrymore is one of the funniest moments in the show, and her interactions with the rest of the cast always leave the audience in stitches. Rally’s agent, Lillian Troy (played by Suzanne Young) is another highlight of the supporting cast. She is the typical aging talent manager: slightly bitter, yet still somehow optimistic. Her one-liners are funny and biting, cutting through the tension in any scene. Even so, she also has the chance to show off her dramatic acting. Her scene with Barrymore is one of the deepest and most human moments in the show, and not enough can be said about the on-stage chemistry between these two.

The scene-stealer of this production has to be Rally’s old T.V. director Gary Peter Lefkowitz, wonderfully portrayed by Jon Ingbretson. With some of the funniest and best delivered lines in the show, Ingbretson is always a delight to watch whenever on stage. He plays the sleazy L.A. pitchman to a tee, strutting about the stage like he owns it. His interactions with Rally are comic gold, and he even gets the chance to swap insults with Barrymore himself, only adding more chances for Ingbreston’s stellar performance to shine through.

Katrina Jackson plays Deidre McDavey, the sweet and somewhat overly passionate love interest of Andrew Rally. Jackson does well in this role, grounding a character that could have simply been played as over-the-top. While her chemistry with Thomas Bowers (Andrew Rally) feels a bit off at first, the two seem to develop a genuine connection as the evening progresses. She and Bowers truly find their footing as a couple by the end of the show. Bowers himself does an able job as the moody and indecisive Rally. While he has some difficulties in the beginning he more than makes up for it with his moving final scene between himself and Barrymore. His last moments on stage truly encapsulate the idea that an actor learns much more than lines in a play; they learn about themselves.

Last, but certainly not least, is Thom Eric Sinn, playing the role of John Barrymore. Sinn’s performance is simply stunning. He fully captures that classic, extravagant style of the older stage actors while retaining a definitive sense of realism. Sinn plays Barrymore as a true thespian; a man who knows what the audience wants and is more than happy to give it to them. His character is grand and verbose, but is also much deeper than even he would give himself credit. Sinn straddles the line between hilarious and profound exceedingly well, creating a character that is much more than either an overblown buffoon or a tragic has-been. The complexity of his performance is absolutely striking and one you definitely don’t want to miss out on seeing.

So to answer our question from the beginning… to see, of course! Make sure you come out for this incredibly witty and engaging production. Even if you hate Hamlet, you won’t hate this!

I Hate Hamlet plays through March 4, 2018 at The Audrey Herman Spotlighters Theatre— 817 St. Paul Street in the historic Mount Vernon neighborhood of Baltimore City in Maryland. For tickets call the box office at (410) 752-1225 or purchase them online.

The Hairy Ape at Spotlighters Theatre