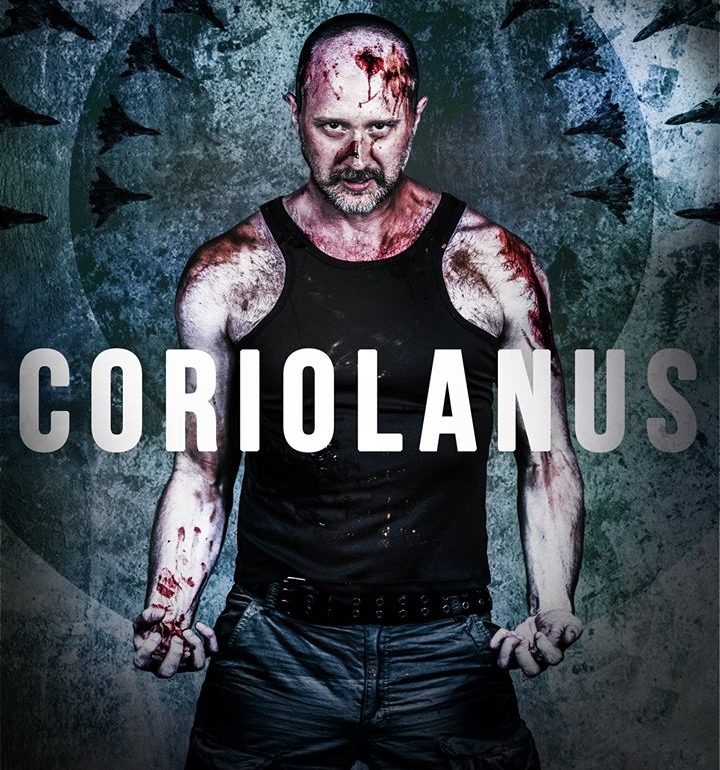 For a world turned upside down as 2018, Director Charlene V. Smith has crafted a riveting, provocative, explosive Coriolanus. “Are we even capable of not harming ourselves?” she asks in the director’s notes, echoing Tori Boutin as citizen of Rome: “We willingly consented to his banishment, yet it was against our will.”

Smith’s Rome is not a pinnacle of civilization. It’s violent and dirty, its citizens easily provoked to engage every whim. From the first moment, Briana Manente’s ashen makeup designs highlight hungry, animalistic eyes, and Kristina Martin’s slouchy, drab costuming clothe a populace only one step removed from complete anarchy. Add to this Smith’s evocative, pounding soundscapes: chanting, clapping, pounding… not quite tribal, but insistent and driven.

Into this steps John Stange’s Coriolanus. He’s not noble, but a brutal and effective war leader. Stange’s charismatic, resonant voice resounds with a man comfortable with killing, not begging. But beg is his commanded to do. Led on by his mother Volumina (the riveting Jessica Lefkow) and senator Menenius (fox-like, incisive Ian Blackwell Rogers), he’s offered a consulship, if only he asks the citizens… nicely.

The citizens, however, are utterly incapable of being asked nicely. Behind the scenes are the most capable citizens of Rome, tribunes Sicinius and Brutus (Anderson Wells and Diane Curley), brilliantly charismatic and manipulative. The citizens will believe anything they’re told, no matter how unbelievable, and quickly stirred by it to violence. This is not a simple parable or allegory, but the resonances to today’s media (including social media) and the electorate’s reaction to it is deeply uncomfortable.

Stange is magnificently awkward as he tries to put on a subservient attitude. The citizens are easily led to hate him, infuriatingly so. And when Stange’s Coriolanus finally snaps, the theater fills with danger: do we ourselves hang on the same knife’s edge?

Coriolanus has been led to this point for his overwhelming competence in defeating Rome’s enemy, the Volscians. The Romans are one step better than bestial; the Volscians are exactly beastlike. They are led by Rob Pike’s terrifying Tullus Aufidius, muscly and stooped, hissing his rage with pent-up energy.

Smith’s direction keeps that energy up at every moment. Coriolanus is often seen as play of magnificent speeches, such as Volumnia’s plea to her son to save Rome from its own mistakes. “I am hush’d until our city be a-fire, and then I’ll speak a little,” and Lefkow is simply heartbreaking. But she can also be both cutting and crushing, as when she deftly and powerfully dissects the vile Tribunes.

Renea S. Brown plays Virgilia, Coriolanus’ wife. Their connection is beautiful and potent. Brown can shift in a moment to play a variety of other roles as well, and is equally dazzling. It’s a brave risk director Smith takes: she fills the stage with Romans and Volscians, played by members of the company who also play larger named roles. It takes a bit of attention from the audience to know when Brown and Lefkow are their more refined, upper class characters and when they’re near-barbaric citizens, but watch their body language and the characters are night and day. It’s a dazzling effort by the entire company, such as Henry Kramer as Coriolanus’ petulant, whiny man-child son as well a commandingly-voiced senator and brutal citizen. Every member of the company, including Boutin, James Allen Kerr, Thomas Shuman, pulls the feat off easily, beautifully voiced and powerful.

Brave Spirits’ dedication to “Verse and Violence” culminates in an absolutely brutal, barbaric ten-on-one fight at the finale, intricately choreographed by Casey Kaleba. Stange “honors [his] own truth” to the very last, fighting with every ounce of energy.

This is an extraordinary Coriolanus: insightful, gripping, and painfully timely. It pulses with energy and powerful, immensely skilled performances. It’s very much a Coriolanus for right now, and must be experienced.

Running Time: 2 hours and 30 minutes with no intermission

Coriolanus plays in repertory with The Trojan Women Project through February 25, 2018 with Brave Spirits Theatre at The Lab at Convergence— 1819 N. Quaker Lane in Alexandria, VA. Tickets are available for purchase at the door or in advance online.

The Incest Rep: A King and No King at Brave Spirits Theatre
Close